For the wounded, one last mission 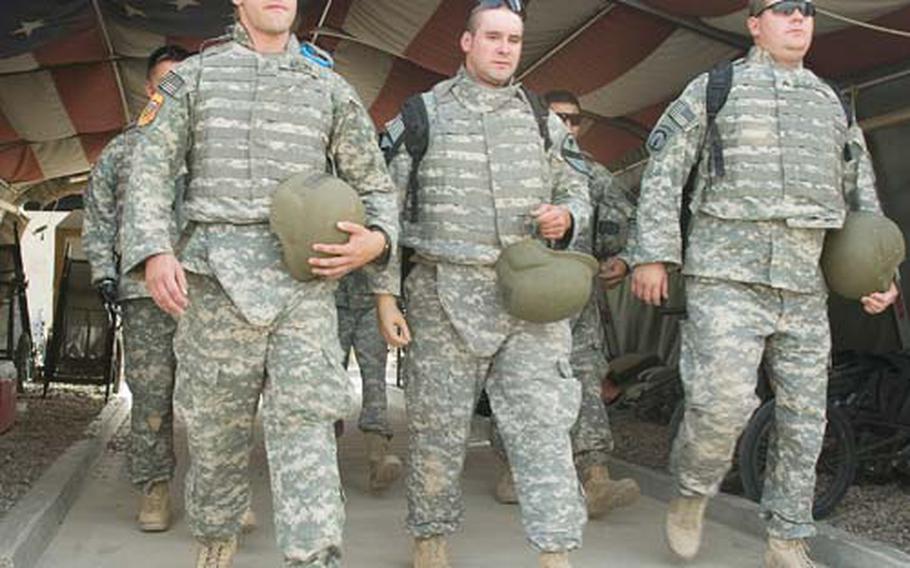 From left: Sgt. Robert Brown, retired Staff Sgt. Bradley Gruetzner and Sgt. Christopher A. Burrell walk through “Hero’s Highway” on June 25 at the Air Force Theater Hospital at Joint Base Balad, Iraq. Brown, Gruetzner, Burrell and four other soldiers wounded in Iraq had the opportunity to return to the places they once served in a program called Operation Proper Exit. (Brian A. Barbour / Courtesy of the U.S. Army)

From left: Sgt. Robert Brown, retired Staff Sgt. Bradley Gruetzner and Sgt. Christopher A. Burrell walk through “Hero’s Highway” on June 25 at the Air Force Theater Hospital at Joint Base Balad, Iraq. Brown, Gruetzner, Burrell and four other soldiers wounded in Iraq had the opportunity to return to the places they once served in a program called Operation Proper Exit. (Brian A. Barbour / Courtesy of the U.S. Army) Hospital staff meets with amputee combat veterans during a visit to the Air Force Theater Hospital at Joint Base Balad, Iraq, on June 25. The trip which was made possible by the Troops First Foundation, which allowed the soldiers to return to Iraq and see for themselves the progress in Iraq made from their personal sacrifices. (Brian A. Barbour / Courtesy of the U.S. Army)

GRAFENW&#214;HR, Germany &#8212; Some soldiers are returning to the places where they were wounded in Iraq under a program that aims to speed their recovery and close a painful chapter in their lives.

"They left without closure. &#8230; They left behind their belongings, their friends and battle buddies," said Rick Kell, director of the Troops First Foundation, who devised Operation Proper Exit after hearing wounded soldiers talk of their desire to return to Iraq. "We have heard for so long that Vietnam veterans wanted to go back and in their words, &#8216;have some closure.&#8217; I thought why not try to get some of these guys to go back in real time so they don&#8217;t have to wait 30 years?&#8197;"

Six soldiers took part in the initial trip in June, and another is planned for November.

One participant in the June trip was Staff Sgt. Kenneth Butler, 29, of Braintree, Mass., who lost his right arm above the elbow in a bomb attack while serving in Baghdad in 2007.

"I blacked out a few times," said Butler, who recently retired from active duty. "The last time was at FOB Rustamiyah and I woke up at Walter Reed."

Almost all wounded soldiers want to go back to where they served, Butler said.

"They want to rejoin their team and to be part of the fight and leave that place on their own terms and not on a gurney almost dead," he said.

Butler &#8212; who plans to study political science under a Department of Veterans Affairs rehabilitation program and become a teacher &#8212; flew over the place where he was injured along with another area where some of his friends were killed in action.

He said he felt a change come over him after he left Iraq on his own terms.

"I wasn&#8217;t sure what it was, but I had something hanging over me until that trip," he said. "I don&#8217;t feel defeated anymore because of that trip. It&#8217;s like a kid falling off their bike and getting back on and riding again. That is the kind of healing that no hospital or therapist can give you."

Kell said he started talking to the military about Proper Exit about 18 months ago, and earlier this year got the go-ahead from Gen. Ray Odierno, the top commander in Iraq.

The program now focuses only on Iraq, but might be expanded to Afghanistan later, said Kell&#8217;s daughter Lindsey, who is a Troops First volunteer.

Other Army leaders have since thrown their support behind the program.

"Operation Proper Exit provided a wonderful opportunity for amputee veterans, some still serving and some retired, to return to Iraq and see the progress that has been made and then leave on their own accord as part of their individual healing and closure process," Gen. Peter W. Chiarelli, vice chief of staff of the Army, said in an e-mail statement sent to Stars and Stripes.

The program caters to all Iraq veterans who were wounded in the war, not just amputees, Lindsey Kell said.

During the June trip, the wounded soldiers returned to the area where they became casualties.

The soldiers got a hero&#8217;s welcome, according to Col. David W. Sutherland, who works with the Joint Staff at the Pentagon and served as a "military mentor" on the first Proper Exit trip. They were met by cheering crowds everywhere they went, from the command headquarters to several forward operating bases in Baghdad, he said.

They also interacted with Iraqi forces and a group of about 20 sheikhs who thanked them for their service and sacrifices, Sutherland said.

The United Service Organizations and Troops First picked up the tab for hotels and business-class flights from a soldier&#8217;s home to Washington, D.C., and on to Kuwait. It costs the organizations, on average, less than $10,000 to send a wounded soldier on a Proper Exit trip, Kell said.

Proper Exit included a week in-country, showing wounded soldiers the improved conditions in Iraq and getting them to talk to deployed soldiers about the care they can expect if they&#8217;re injured downrange, he said.

The wounded soldiers also visited bases where they served and flew over the places where they got hurt, Kell said.

Lt. Col. Marshall Smith, a psychiatrist who works with wounded troops at Landstuhl Regional Medical Center in Germany, said many of those medically evacuated out of Iraq feel like they have let their buddies down.

"Why did I survive when my teammates were killed?" he said. "For some of them I could see where it may be helpful for them to go back and see the area where it happened.

"Some would say: &#8216;I never want to go back and I never want to experience it again. That would be too traumatic,&#8217; but a lot of them feel a sense of longing to return to the scene," he said.

Smith said he doesn&#8217;t know of any research on the potential benefits for combat veterans of returning to the places they fought.

"I do know that one very common treatment for PTSD is prolonged exposure therapy, where people go through every detail of what happened to them and by having them be exposed to it," he said. "It is very beneficial."