For the wounded, a place of hope 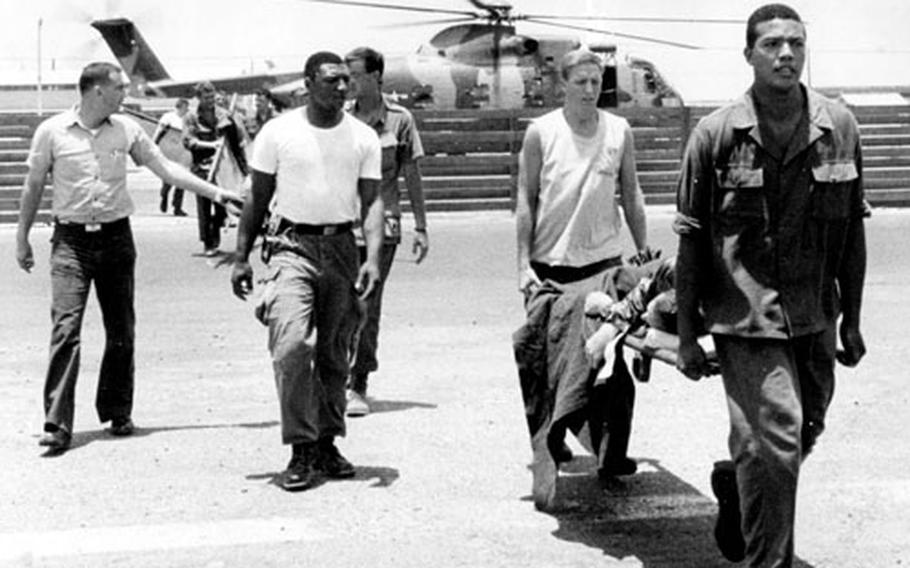 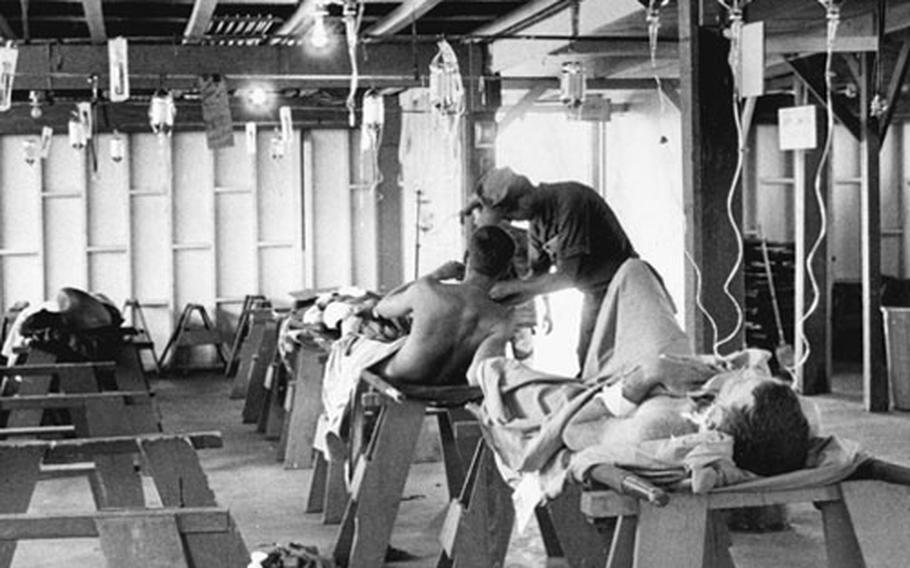 Buy Photo
Patients are treated in the hospital's receiving ward before being taken inside for further examination. (Andrew Headland Jr./Stars and Stripes) 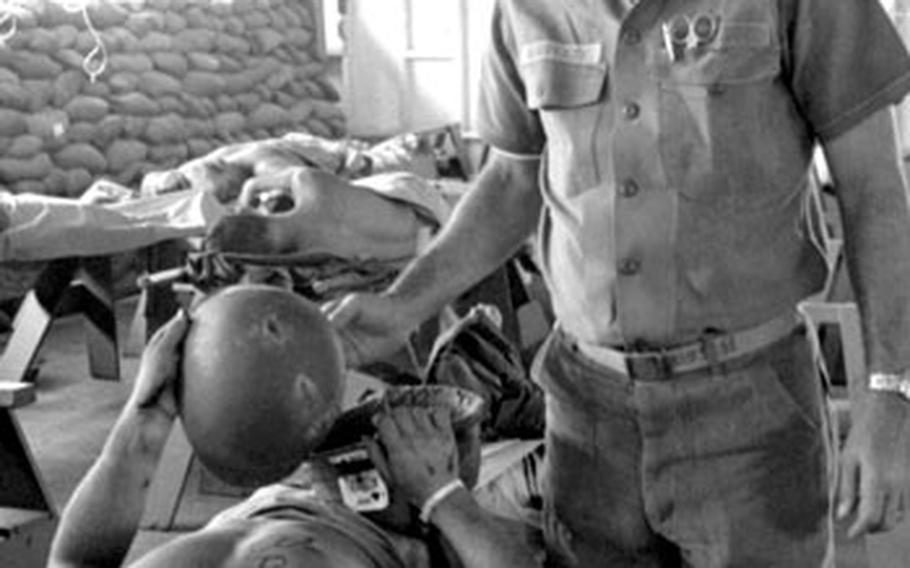 Buy Photo
A patient whose helmet was riddled by shrapnel shows the damage to a corpsman, The helmet probably saved the life of the servicemember, who suffered only superficial wounds. (Andrew Headland Jr./Stars and Stripes)

Here, on 50 acres of sand dunes near the Da Nang River, within a stone's throw of the South China Sea, and within uncomfortably close range of random enemy rockets, staff members of the largest casualty receiving hospital in Vietnam are applying the finest arts of Medical science in an untiring effort to heal hundreds of American and allied troops of battlefield injuries and other illnesses.

With only a superficial wound, a soldier on a receiving table clings to a shrapnel-punctured helmet decorated with the king of spades.

Nearby, a critically injured Vietnamese soldier lies uncomprehending, the victim of a severe head injury.

In the receiving ward doctors and hospital corpsmen work feverishly over a victim who lost a foot in a land mine explosion.

In a nearby recovery ward a nurse in a crisp, white uniform jokes with a hearty-looking patient who will soon be discharged and back on the job.

More than 27,000 patients have been treated at Naval Support Activity Station Hospital since the institution was opened early in 1966. Most of them returned to active duty after being hospitalized less than a week.

Navy Capt. Richard Lawrence Jr., senior medical officer, pointed out that commensurate with growing needs, the hospital was expanded from 60 to 700 beds in two years and that treatment is provided in virtually every medical specialty.

Although most patients are military, correspondents, authors and photographers covering the war and occasionally a badly wounded Vietnamese civilian as well as prisoners of war are admitted for treatment.

Each patient receives the same careful, expert medical attention as does his neighbor.

Rows of air-cooled, double-length quonset huts built on powdery fine sand comprise the hospital which is staffed by more than 800 officers and enlisted men.

Included in the hospital crew are 45 physicians who are highly skilled in every branch of surgery and medicine, 30 nurses, 17 medical service corps officers, six dentists and 700 enlisted men.

Additionally, 100 Vietnamese employees serve as nursing assistants, clerks. clinic and laundry workers, as laborer; and in other capacities.

Among the enlisted ranks are 75 Marines and Army men on security and liaison assignments.

Surgery is performed in nine operating rooms. The intensive care unit is equipped with 30 beds.

Crews of medical corpsmen stand ready around-the-clock to receive patients from Marine helicopters that put down at the hospital's front door, or are transferred directly from ambulances.

Administrative officer Lt. Cmdr. Daniel A. Brandon said that in a 10-month period ending in May, 1968, 17,000 patients were admitted. Of the total, 6,000 were battle casualties requiring more than 18,000 operations.

Admissions, which were averaging 1,100 monthly late in 1967, jumped to a monthly peak of 2,175 during the Tet communist offensive.

"From a medical standpoint it would be refreshing to see a clean bullet wound come in once in a while," he said. "But this is mostly a booby trap, land-mine, dirty type of war."

Grisamore noted that medical evacuation, usually by helicopter from outlying areas, has been expedited to the extent that many persons are being treated at the hospital within an hour or less after being wounded. It takes about two or three minutes for a crew to whisk wounded men from the helicopter into the hospital receiving ward.

A total of 5,500 patients with bone injuries have received 12,500 operations in the last nine months, Grisamore said.

Among unusual services provided at the hospital is a Shock Research Unit supported by Naval Medical Research Unit No. Two from Taipei. Additionally, a Preventive Medicine Unit operates in a public health capacity throughout the I Corps area of Vietnam.