For the first time, they’re one big family 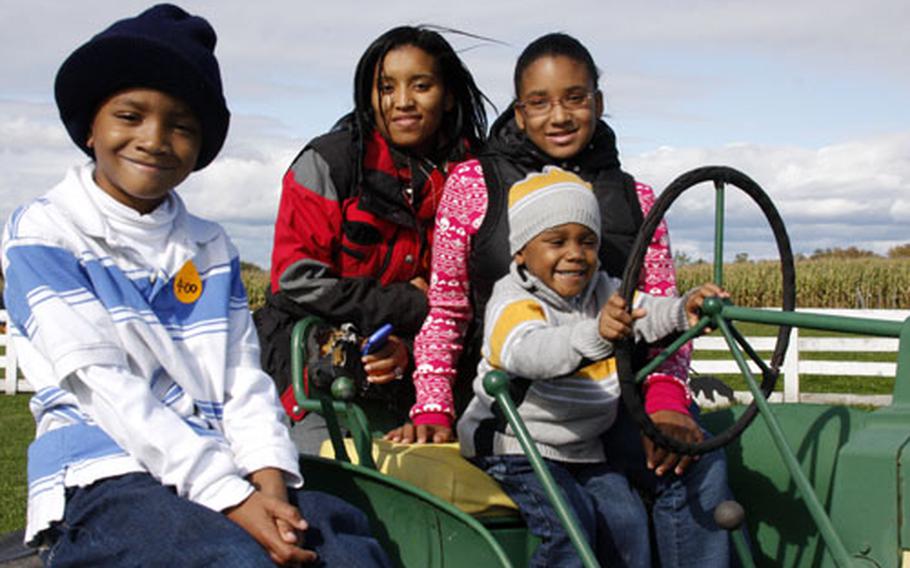 The Brown family on an Oct. 5 outing at Old McDonald’s Farm in Sackets Harbor, near Fort Drum, N.Y. Three-year-old Malik sits at the wheel of the tractor as Justin, 7, Marcetia, in back, and Jasmine, 11, look on. (Joe Gromelski / Stripes)

The Brown family on an Oct. 5 outing at Old McDonald’s Farm in Sackets Harbor, near Fort Drum, N.Y. Three-year-old Malik sits at the wheel of the tractor as Justin, 7, Marcetia, in back, and Jasmine, 11, look on. (Joe Gromelski / Stripes) She was marrying the father of her baby, the nicest man she had ever met, who was promising to honor her and keep her. And she was terrified.

Marcetia Brown had seen generations of women struggle with the men in their lives. Her own romantic history, with one marriage behind her, had included, she said, infidelity, heartbreak and violence.

"Men change after marriage," she said. "It&rsquo;s like a joke in my family. I guess I believed a man could never love a woman."

So she had resisted Spc. Thomas "T.J." Brown, tried to focus on her two children from her previous marriage at age 19, and more than once tried to break it off.

He didn&rsquo;t want to let her go.

"He said he thought that I was the person he&rsquo;d been praying for," she said. "He said, &lsquo;Don&rsquo;t you have faith in God?&rsquo; "

They married in July 2007, just before he deployed with the Triple Deuce, when he insisted that "he didn&rsquo;t want to go over there without being married," Marcetia said.

She&rsquo;d agreed. Because T.J. was Marcetia&rsquo;s hero, just as she was, for him, heaven-sent.

"He was the only person in my life who could ever calm me down," said Marcetia, a thoughtful, attractive 30-year-old. "He&rsquo;s the only person I&rsquo;ve ever been able to depend on. The way he looks at stuff &mdash; I want to be like him."

The new family exemplifies the hope &mdash; and the challenges &mdash; of many military families struggling with the loneliness and separation of deployments, followed by the adjustments and compromises of learning to live together when the deployment ends and the soldier returns.

Although the Browns have known each other for years, through two deployments and many ups and downs, living together will be something new for them.

"The truth is we&rsquo;ve never lived under the same roof for more than a couple of months," Marcetia said just before her husband returned.

Under the roof of the family&rsquo;s sparsely furnished apartment 20 minutes from Fort Drum are Malik, 3, whom Marcetia had with T.J. after getting pregnant during his R&R the first time he deployed to Iraq; Justin, 7, and Jasmine, 11.

Brown, now a sergeant, also has a child from a previous relationship, who lives with his ex-girlfriend.

Jasmine, more serious and mature than most girls her age, said she misses her father, who&rsquo;s in the Air Force and whom she and Justin visit a few times a year. And she said she worried about her new stepfather&rsquo;s return.

"I prefer him not here, because I have a little more freedom," she said.

But she had also noticed an upside to T.J. being around.

The couple kept in close contact during the deployment.

They e-mailed, he phoned &mdash; he even bought a cell phone so he could call her almost every day. Sometimes they got on the Internet and the phone at the same time.

But sometimes the phone calls were not so fun. Marcetia missed him terribly, she said. She cried at night. She felt so alone &mdash; married but still a single parent &mdash; and that she had far too much to do. But instead of feeling sad, she got mad.

"Every time he called, I had an attitude," she said. "I was really nasty.

"He said, &lsquo;Listen: You&rsquo;re stronger than this. Why are you acting like this?&rsquo;" Marcetia said. "It was just what I needed to snap out of it."

During T.J.&rsquo;s 14-month deployment with the Triple Deuce, the newlyweds talked often about him coming home, the joy of it &mdash; and how to manage their differences.

"We want to do better this time," Marcetia said.

Marcetia is a licensed practical nurse who last worked in a nursing home on Long Island, where her mother lives and where she and the children lived until shortly before T.J. returned from deployment.

She&rsquo;s interested in self-improvement. She took a finance class, she said, to better manage the household, and she hopes to return to school to become a registered nurse. She has also read up on post-deployment issues, which helps, but does not solve, problems.

Since T.J.&rsquo;s return, parenting issues have caused the most conflict, she said.

"He&rsquo;s too harsh. He expected them to be little porcelain dolls," she said.

So she suggested they both attend a weekly parenting class.

Now the boys are feeling more comfortable with T.J., she said. But Jasmine is not.

"I feel like it&rsquo;s best to keep them separated," Marcetia said. "We took family pictures and she was about to break out in tears."

It&rsquo;s been a cold, snowy winter. But the family didn&rsquo;t leave Watertown during the unit&rsquo;s block leave because money has been so tight. Their truck broke down recently and had to be towed.

And T.J. hasn&rsquo;t been immune from what are common post-deployment reactions.

"If we go to, say, Wal-Mart, he can&rsquo;t tolerate it for a long period. He gets anxious," Marcetia said. "He still doesn&rsquo;t sleep through the night. He used to get up and put on the TV, and that would wake me up."

And although before T.J. returned, Marcetia had talked about how much he helped around the house, that hasn&rsquo;t quite panned out.

"He helps out when he feels like it," she said. "He goes and chitchats with his friends."

Those things don&rsquo;t bother her, she said. But she was still amazed at the "serious, throw-the-rings, I-want-a-divorce fight" they had recently, and what it was about.

Marcetia supported Barack Obama for president. Her husband did not.

"He accused me of wanting to vote for him just because he&rsquo;s black," said Marcetia.

T.J. was of the opinion that Obama would not be a friend to the military, his wife said, a position she said she found both wrong and strange, because it turned out that her husband had neglected to register to vote.

The argument continued on its downward spiral.

"He accused me of wanting to leave him for Barack Obama," Marcetia said.

Marcetia pointed out that many, many women would leave their husbands for Barack Obama, if only they could.