For talks with Germany’s elite, US ambassador calls in enlisted Marines 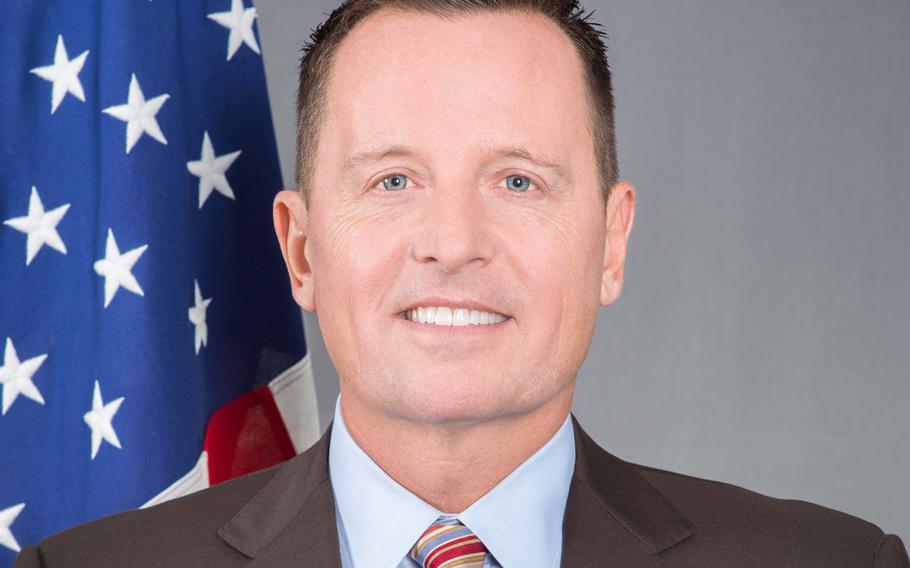 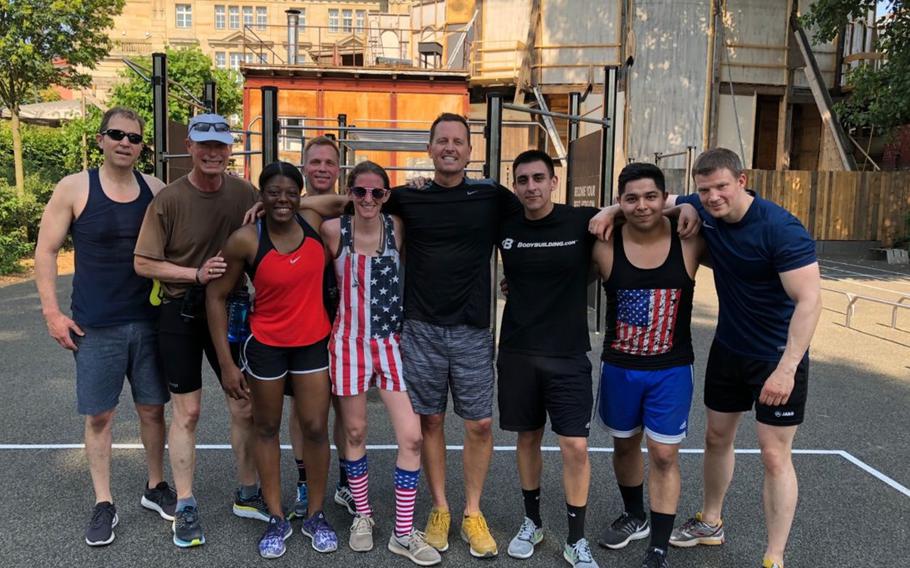 U.S. Ambassador to Germany Richard Grenell poses with embassy Marines during a Memorial Day fitness challenge in Berlin, May 28, 2018. (Courtesy of the U.S. Embassy in Germany) 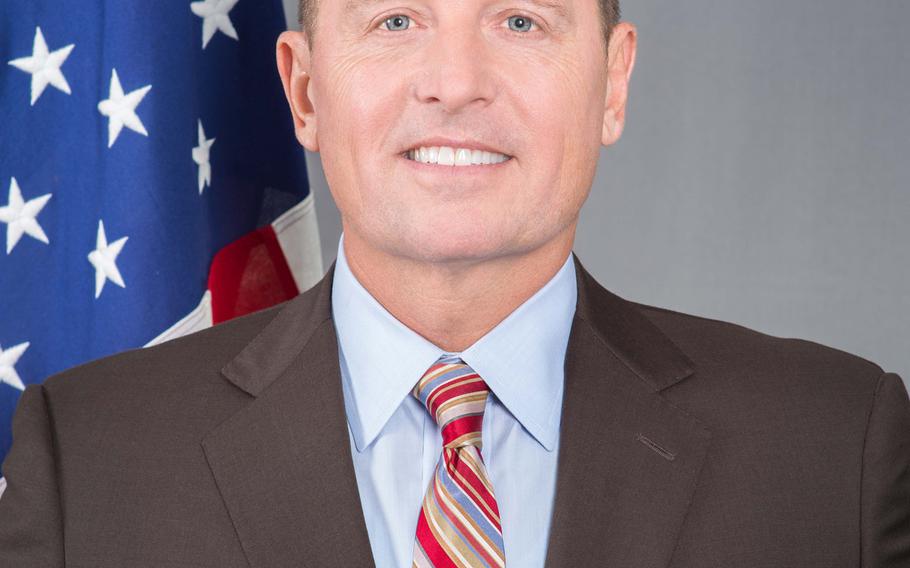 U.S. Ambassador to Germany Richard Grenell, who says he invites Marines based at the Berlin embassy to mingle with industry leaders at official events. (Courtesy of the U.S. Embassy in Germany)

BERLIN — One of the first things Richard Grenell did when he arrived in May as the new U.S. ambassador to Germany was call in the Marines.

It was an unusual first move — a top diplomat prioritizing an office rapport with junior troops. But six months into the job, the Marines are serving as unofficial ambassadors for the envoy at high-level dinners with Germany’s movers and shakers.

“They help me send a message that a serious military takes people committed to it for a career,” Grenell said during a recent interview at the embassy building, which is sandwiched between the historic Brandenburg Gate and the city’s Holocaust memorial.

Grenell’s relationship with about 15 Marines who help secure the diplomatic compound has become a focal point for the 52-year-old ambassador, who attracted attention early in his tenure as President Donald Trump’s lightning rod in Germany.

On military matters, Trump’s focus on defense spending — or lack of it — among key allies like Germany has been relentless. At NATO meetings, Trump has demanded more and made threats about quitting the alliance if allies fall short, straining Washington’s relationship with Berlin in the process.

As Trump’s point man, one of Grenell’s tasks as he meets with senior German leaders is drumming up support. Progress is being made, Grenell said, as Berlin gradually increases its expenditures.

Much of Trump’s ire about NATO has been directed at Germany — an economic powerhouse falling well short of an alliance benchmark that calls for dedicating 2 percent of gross domestic product to military matters. Trump also has criticized Germany for a trade imbalance with the United States.

Some of the pressure on Berlin gets applied directly — Grenell recently authored an op-ed on the need for Germany to do more on defense, and he frequently raises the issue on social media.

But Grenell, who served for seven years as the U.S. spokesman at the United Nations during the George W. Bush administration, also gets his message across in other ways, some unusual in a country like Germany where defeat in two world wars and association with the Holocaust damaged the image of military service.

Enter the Marines, who have become a regular presence at the ambassador’s house, where German policymakers, diplomats and business executives come to talk. Regardless of the topic, he says he likes to showcase the Marines to spotlight the American military’s overall stature.

“I take time at the beginning and talk about our Marines and their service, and that they are heroes,” Grenell said. “Without a doubt every dinner, some German, usually more than one, will come up and say, ‘it’s amazing how you guys honor military service.’”

For the Marines, Grenell’s approach was jarring at first.

“Him inviting us over to important dinners and meeting people that were prominent people in the European community, that was crazy,” said Sgt. Anna-Cathryn Colson, an Alabaman who has worked security at the U.S. embassy since May.

Colson said it was an opportunity to learn and network in a way she hadn’t experienced on her other diplomatic security assignments. “We were treated like adults,” Colson said.

Sgt. Sergio Medina, another member of the security team, said hobnobbing at the dinners and roundtables has forced Marines “out of their comfort zones.”

“I’ve had no experience trying to talk to these kinds of people, heads of organizations,” said Medina, whose previous embassy assignments were in Japan and Uganda.

One aspect of life in Germany the Marines said caught them off guard was how military service isn’t generally regarded as a point of pride.

In Germany, conflicted views about the military date back to the country’s Nazi past and role in starting World War II. German misgivings still linger and are an obstacle in building a more robust military.

Grenell said promoting the Marines’ service in diplomatic settings is a way of humanizing the spending debate.

“Inherent in that debate is an assumption that the military is honored for their service,” Grenell said. “That they are viewed as contributing to society, that it is not a negative thing.”

Promoting U.S. interests During his six months on the job, Grenell has been more outspoken than some of his recent predecessors on the issues. He says the difference is that he is a “policy guy” and not a political fundraiser. While ambassadors are usually career diplomats in rougher parts of the world — Afghanistan, Iraq, African outposts — top diplomatic posts in western Europe or Japan are frequently given to big campaign financiers.

“I didn’t raise a single penny for Donald Trump and that’s different,” said Grenell, the first openly gay ambassador nominated by the president.

Grenell says he sees eye-to-eye with Trump’s communication style and uses social media to convey his message. Administration critics have blasted Trump for a lack of decorum and tweeting falsehoods. Grenell sees it differently.

“President Trump is someone who reaches people directly through social media, he speaks normally,” Grenell said. “He is very sensible and he wants his administration to be the same way.”

Grenell’s own outspokenness has upset some in Berlin, who say he has crossed lines at times. In a June interview with the conservative news outlet Breitbart, Grenell voiced support for some right-wing political leaders in Europe, something that riled German left-wing politicians who complained about a breach in diplomatic protocol.

Grenell brushed off questions about boat rocking in Berlin. While public opinion polls regularly show disapproval of Trump in Germany, Grenell counters that he gets a different message when he meets with German executives.

“Boy, the American economy is booming” is what German business leaders say, Grenell said. Executives see an administration that has “cut regulations like never before. It is very exciting for German businesses and job creators.”

In October, German Chancellor Angela Merkel announced plans to subsidize the construction of a liquid natural gas terminal. The move to open the market to U.S. energy could be viewed as a nod to Trump administration calls for Berlin to rely less on Russian natural gas, which happens to be cheaper than alternatives.

Ahead of that decision, Grenell hosted a dinner and roundtable discussion with natural liquid gas suppliers and buyers from the U.S. and Germany. Marines were in attendance with the task of mingling.

“They were very nervous,” said Grenell, who told the Marines to network, collect business cards and take advantage of the opportunity.

As Grenell integrates the Marines into the broader diplomatic mission, he says he has benefited from an overall sense of camaraderie that has developed.

Soon after arriving in Berlin, Grenell began working out with the Marines. On Memorial Day, he joined them for “The Murph Challenge,” a rigorous event held in honor of 1st Lt. Michael Murphy, a Navy SEAL killed in Afghanistan in 2005 and later recognized with the Medal of Honor.

“He finished, which is better than most people,” Colson said.

Medina said it was awkward at first to socialize with an ambassador, the civilian equivalent of a general.

“But he was very earnest about it and genuinely wanted to know us,” Medina said.

While Grenell told the Marines they could call him Ric, the informal ambassador ran up against the limits of Marine willingness to mess with protocol.

“At least they’ve stopped calling me ambassador and call me sir,” he said.