For spouses, waiting is the hardest part Amy Randall, 31, lives in a neighborhood outside of Sasebo Naval Base with young Sebastian, who&#39;s almost two. Amy, the wife of Lt. Brian Randall, the air boss and safety officer aboard the USS Juneau, is seven months pregnant. (Greg Tyler / S&S)

Amy Randall, 31, lives in a neighborhood outside of Sasebo Naval Base with young Sebastian, who&#39;s almost two. Amy, the wife of Lt. Brian Randall, the air boss and safety officer aboard the USS Juneau, is seven months pregnant. (Greg Tyler / S&S) 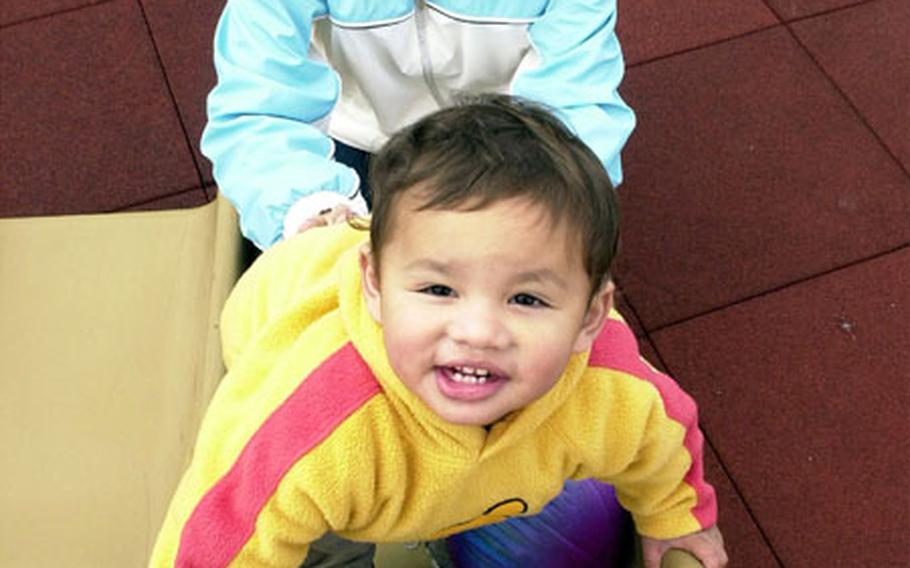 Michelle Jones, 20, and her son Michael, 20 months, enjoy time together during a morning play group sponsored by Sasebo Naval Base&#39;s Fleet and Family Services Center. Her husband, Petty Officer 1st Class Michael Jones, is deployed with the USS Fort McHenry. Michelle is about 17 weeks pregnant and concerned that her husband&#39;s ship could be directed toward the Middle East. (Greg Tyler / S&S)

Like all ships from Sasebo, the Juneau has an ombudsman to serve as liaison between the command and families. Still, the ship&#8217;s leaders cannot tell ombudsmen or family members where the ship is or what it&#8217;s doing.

Naomi Salter is married to Air Force Maj. Larry Salter, with Kadena Air Base&#8217;s 961st Airborne Air Control Squadron. He left Okinawa in late November for a 90-day deployment to Saudi Arabia. Salter called this week to say he was safe in Turkey, but he would have to limit his conversations with her to two 15-minute calls per month, she said.

That doesn&#8217;t leave much time to talk about one particularly trying month, in which Naomi Salter&#8217;s car had a flat, another car rear-ended her and she rammed into another car off base. Having to renew the Japanese compulsory insurance and personal insurance on her cars, while all four of her children were sick, added to the mix.

At Sasebo, Michelle Jones waits for Petty Officer 1st Class Michael Jones, deployed aboard the USS Fort McHenry more than a month ago. She said she doesn&#8217;t know where the ship is, where it&#8217;s going or when it&#8217;ll return &#8212; but she knows it could be ordered to participate in the war with Iraq.

Sometimes not knowing is almost a blessing, Tonya Ulmer said. Details about her pilot husband&#8217;s work remains a mystery.

She has other tasks to occupy her, she said: protocol duties, preparing for a July transfer to Nellis Air Force Base in Las Vegas and the birth of their first child this summer.

The Misawa couple married last June and are expecting a daughter around June 19.

Amy Randall at Sasebo shares that concern. She&#8217;s a month away from the due date of her second child.

Others are coping with keeping families together while assuming new and sometimes strange duties in their spouses&#8217; absence.

At Sasebo, Amy Randall praised the informal support friends and neighbors have extended.

Sometimes, though, nothing works like a bit of pampering. On Okinawa, Carter said she and her two children, Athena, 11, and Tony, 8, also rely on support from friends at church and at the American Red Cross, where she volunteers.

But over the Christmas holiday season, they returned to her native New York City to visit friends and family &#8220;to bring a different element of excitement, so the kids wouldn&#8217;t be so sad,&#8221; she said. &#8220;They still missed him, but not to the degree they would have if we had stayed here.&#8221;

At Misawa, Tonya Ulmer attends weekly gatherings with other squadron wives for dinners and brunches at the Misawa Officers&#8217; Club. In December, a group of them went to South Korea for shopping.

But no one pretends such strategies are anything but stopgaps.

Marisol Carter said her husband calls and e-mails every day. They joke and talk about how the kids are doing, she said &#8212; but when he comes home, the couple plan to take 30 days off to reconnect.

Your servicemember husband or wife is on a long deployment. What&#8217;s a spouse to do?

&#8226; Many spouses say they form loosely knit networks with others in the same predicament and find this interaction very helpful.&#8226; Most commands have family or spouse organizations that sponsor special events. Recently, the USS Juneau&#8217;s group held &#8220;Together Time,&#8221; a parent/child project, at Sasebo Naval Base in Japan.&#8226; Before deployments, personnel from deploying units, with experts from organizations such as the Navy&#8217;s Fleet and Family Service Center, hold pre-deployment briefings with families, said Tamya Carter, family advocacy educator at Sasebo&#8217;s FFSC. The briefings cover topics including wills and powers-of-attorney and what to do about administrative, financial, medical and other issues while the servicemember is deployed.&#8226; During deployments, Carter said, experts from entities such as the Navy&#8217;s Fleet and Family Service Center hold mid-deployment briefings with families to update the spouses and discuss some of the issues touched on in the pre-deployment briefing.&#8226; Organizations such as the Navy&#8217;s Fleet and Family Services Center provide educational programs, arts and crafts, social activities and even individual counseling for spouses and children left behind by servicemembers on deployment, explained Elaine Horrell, marriage and family counselor at the FFSC in Sasebo.&#8226; A new program for pregnant women who could give birth before their husbands&#8217; return to port is offered, according to LaDonna Kolman, new family support nurse with the FFSC. The Dula Program, or labor partner program, arranges for volunteers to be with women during labor.

For more information, call the base department responsible for the well-being of families and spouses, and they will almost certainly have a program or service to meet your needs.