For some, court cases show 'understanding of democracy has grown' in South Korea 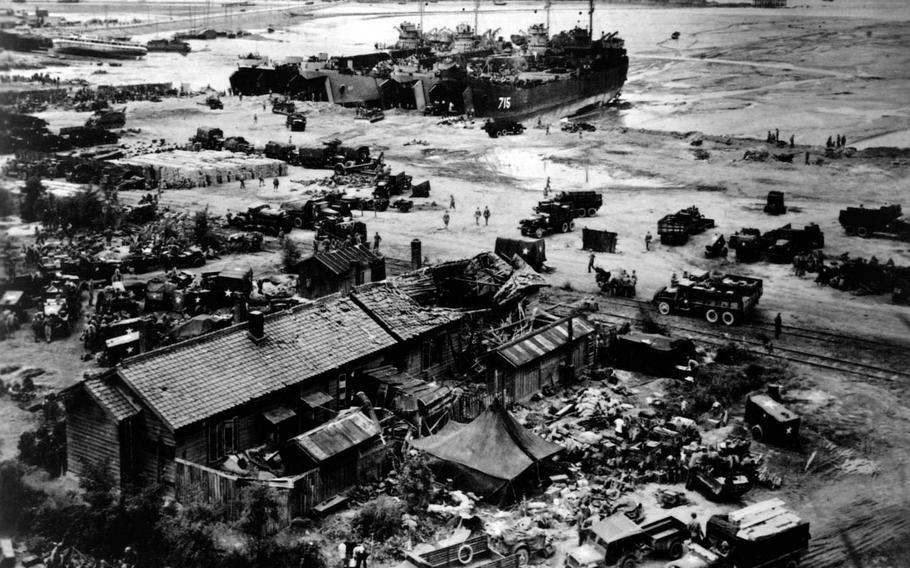 Land Ship Tanks unload at Wolmi-do, Inchon, Korea on D-plus and Marine trucks to take supplies to advancing troops. In 2011, a group of approximately 160 former residents of Wolmi Island filed suit against the government, seeking compensation for property lost during a September 1950 bombing of the island. (U.S. Army)

Land Ship Tanks unload at Wolmi-do, Inchon, Korea on D-plus and Marine trucks to take supplies to advancing troops. In 2011, a group of approximately 160 former residents of Wolmi Island filed suit against the government, seeking compensation for property lost during a September 1950 bombing of the island. (U.S. Army) Leathernecks lead a patrol between destroyed buildings during a "mop up" of Wolmi Island, Sept. 15, 1950. Some 400 North Korean troops invaded Wolmi, and the U.S believed an attack on the island was necessary in advance of a planned amphibious assault on Incheon. (U.S. Marine Corps) Buy Photo
Jon Chon-bong, 78, sits inside a small building near Wolmi Park in 2011 and talks about the U.S. bombing of his village on Wolmi Island in 1950. He is one of 44 South Koreans who filed a lawsuit seeking compensation for the property their families lost in the bombing. Behind him, left, is Jeong Ji-eun, whose father died in the attack. (Ashley Rowland/Stars and Stripes) 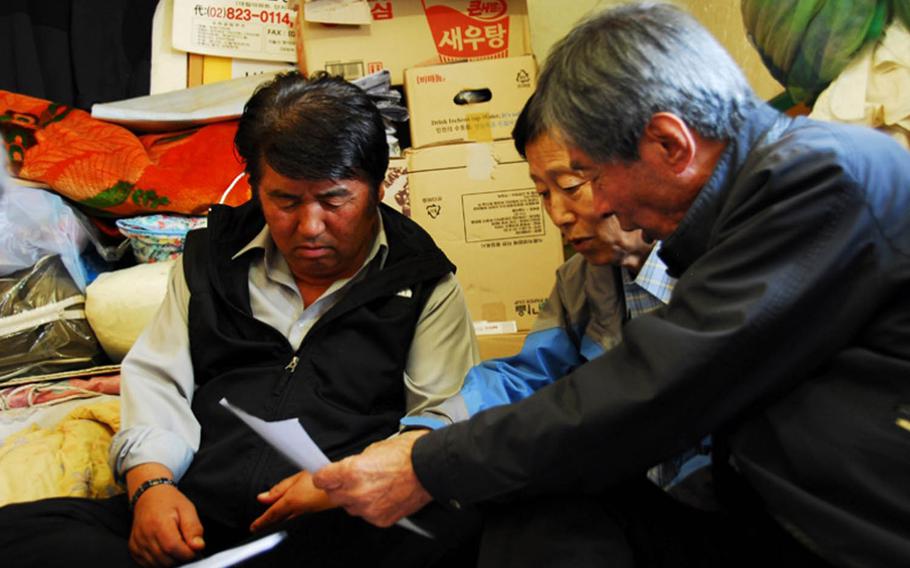 Buy Photo
Jeong Ji-eun, from left to right, Jang Seok Ju and Jon Chon-bong look at old aerial photographs in 2011 of Wolmi Island, where they lived before the U.S. bombed the island in September 1950 to rid it of North Korean troops. The men were part of a group of approximately 160 former residents of Wolmi Island that filed suit against the government, seeking compensation for property lost during the bombing. (Ashley Rowland/Stars and Stripes)

SEOUL, South Korea — In the fog of battle and then in the lean decades after the Korean War, South Korea’s authoritarian government ruled with an iron fist, squelching dissension and at times branding critics as communists.

But in several recent legal cases, South Koreans have been doing what once was unthinkable — successfully holding the government responsible for wartime deaths and other actions undertaken in the name of national security. Some cases involve long-ago actions by the U.S. military.

“Our understanding of democracy has grown,” said Yoo Chan-yul, a professor of political science and diplomacy at Duksung Women’s University in Seoul. “So people are judging the actions of the past by the standard of today.”

In May, a Seoul appeals court ruled that the government was responsible for the death of a civilian during a U.S. Navy destroyer’s shelling of the coastal city of Pohang in September 1950 in the early months of the Korean War.

According to local reports, the court found that the U.S. attacked after receiving erroneous reports from the South Korean army that North Korean forces were at the target. The government was ordered to pay the equivalent of $44,000 in compensation to the victim’s family.

In early June, the Supreme Court awarded $1.47 million to the families of 18 civilians killed by a militia operating on Ganghwa Island during the Korean War, saying the victims were “collectively and systematically” murdered without trial.

Court documents said the militia, supplied with weapons and instructions from the government, detained, tortured and killed suspected communists and their families during the war. The militia was one of many regional self-defense forces created by then-President Syngman Rhee.

Meanwhile, 122 elderly women who once worked as prostitutes catering to U.S. troops are suing the government for $1.2 million. They claim that South Korea, fearing the U.S. would pull its forces from the peninsula, systematically encouraged them to sleep with American servicemembers after the war to keep troops happy and bring U.S. dollars to the struggling economy.

The women claim the government has not adequately cared for them, and are asking for an official apology and an investigation into the government’s oversight of their work.

South Korea’s history after the Korean War was marked by a series of military dictatorships through the 1980s, bloody coups and sham trials of suspected communists and other dissidents.

As the country has become more democratic, the public and the courts seem more willing to accept criticism of national leaders, said Park Tae-gyun, a professor of modern Korean history at Seoul National University.

“Our understanding of citizenship is more mature than in the past,” he said. “And our democracy has become more systemized.”

Today, he said, courts are giving more weight to the findings of the country’s Truth and Reconciliation Commission, set up in 2005 to investigate atrocities committed by the government against its citizens.

Before it ended in 2010, the commission conducted more than 11,100 investigations into everything from executions and wartime killings of refugees to whether some South Koreans were wrongly convicted of crimes and should have their names cleared.

Ahn Kyung-ho, a former investigator for the commission, said there is an attitude of weariness now toward victims of past government atrocities. Many don’t understand why they want to dredge up the past, or think the government has done enough for them.

But the victims often faced retribution from previous administrations for demanding apologies or asking for compensation, particularly under President Park Chung-hee, who seized power in a 1961 coup and ruled until his assassination in 1979. Some who spoke out were labeled as communists.

“They couldn’t do anything due to the government’s repression,” said Ahn, who heads a democracy and unification activist group.

Park’s daughter, current president Park Geun-hye, apologized during the presidential campaign for incidents that took place during his rule, including the arrest in 1974 and execution of eight democracy activists.

Ahn said the cases now in court are closely tied to the timing of the findings of the Truth and Reconciliation Commission. Under South Korean law, lawsuits can be filed no later than three years after someone learns a law has been broken.

But favorable findings from the commission don’t guarantee a favorable ruling for the victims. In 2011, about 160 former residents of Wolmi Island, separated by a narrow channel from the port city of Incheon, filed suit against the government, seeking compensation for property lost during a September 1950 bombing of the island.

Some 400 North Korean troops invaded Wolmi, and the U.S thought an attack on the island was necessary in advance of a planned amphibious assault on Incheon. The Incheon landing, conducted a few days later, proved to be the turning point in the Korean War, but at least 100 of the 600 villagers on Wolmi Island were killed in the raid. The survivors were never allowed to return.

The Truth and Reconciliation Commission investigated the incident and ruled that the U.S. had failed to warn residents before the attack, and had dropped napalm bombs and strafed women, children and the elderly in open areas despite clear weather.

The lawsuit asked that $2,750 be awarded to each of the 44 households represented in the suit. The city of Incheon, the U.S., and the United Nations were also named in the suit.

However, two courts have since ruled that the islanders could not sue without having proof of ownership of the land, according to Han In-duk, head of the group that filed the lawsuit.

Yoo said the Ganghwa Island deaths and other wartime atrocities took place in a climate of crisis when the government desperately feared the spread of communism. Even after the war, ordinary people were more concerned with making a living than with pursuing additional freedoms.

But vestiges of the past and the country’s Confucian heritage, which emphasizes deference to authority, remain. Even today, he said, National Assembly members and leaders of the country’s chaebols, the mega-companies that dominate South Korea’s economy, operate in a top-down manner that discourages questioning.

Today, much of the desire to hold the government accountable for past wrongdoings is based on emotion, not legalities.

“The public seems to think that we need to take care of people who have suffered because of what the government did,” Yoo said.

The lawsuits over decades-old wartime atrocities have opened the door for legal actions against the current government, and are leading to broader social change by making the government behave more carefully, he said.

Suits are planned or have already been filed over the government’s sluggish response to the recent outbreak of Middle East Respiratory Syndrome and over safety failures that led to last year’s ferry sinking that killed more than 300 people, many of them high school students on a trip.

“In the old days, the government did anything it wanted,” he said. “But now it knows it can’t take dogmatic actions and must take the interests of people into consideration.”