For soldiers in Iraq convoys, nothing is ever routine 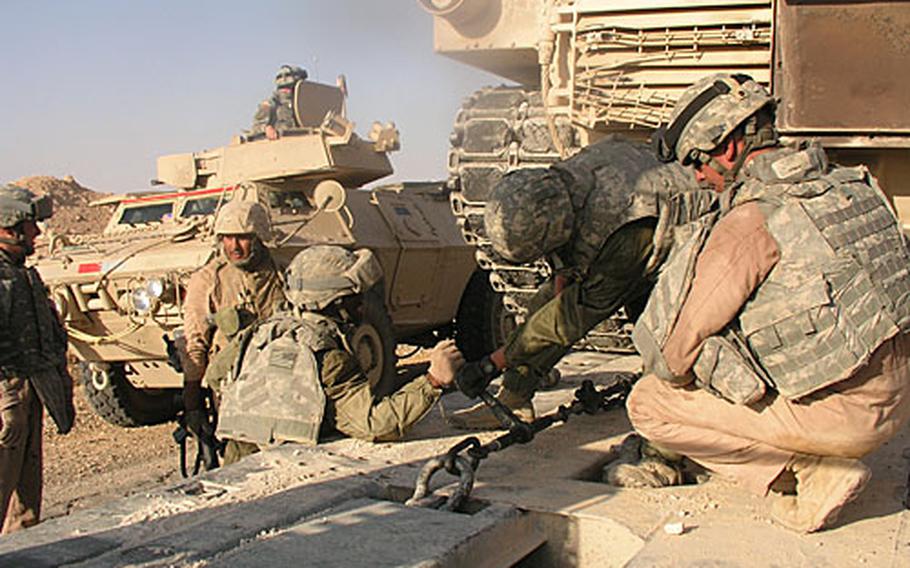 Soldiers of the 25th Transportation Company, 787th Combat Sustainment Support Battalion, work vigorously in the intense heat Thursday to secure a U.S. Marine Corps tank to a trailer so their convoy can resume its trip from Combat Outpost Rawah to Al Asad Air Base in western Anbar province in Iraq. Two tires went out on the trailer the tank had initially been secured to, so convoy leaders switched it to an undamaged trailer. (Franklin Fisher / S&S)

Soldiers of the 25th Transportation Company, 787th Combat Sustainment Support Battalion, work vigorously in the intense heat Thursday to secure a U.S. Marine Corps tank to a trailer so their convoy can resume its trip from Combat Outpost Rawah to Al Asad Air Base in western Anbar province in Iraq. Two tires went out on the trailer the tank had initially been secured to, so convoy leaders switched it to an undamaged trailer. (Franklin Fisher / S&S) 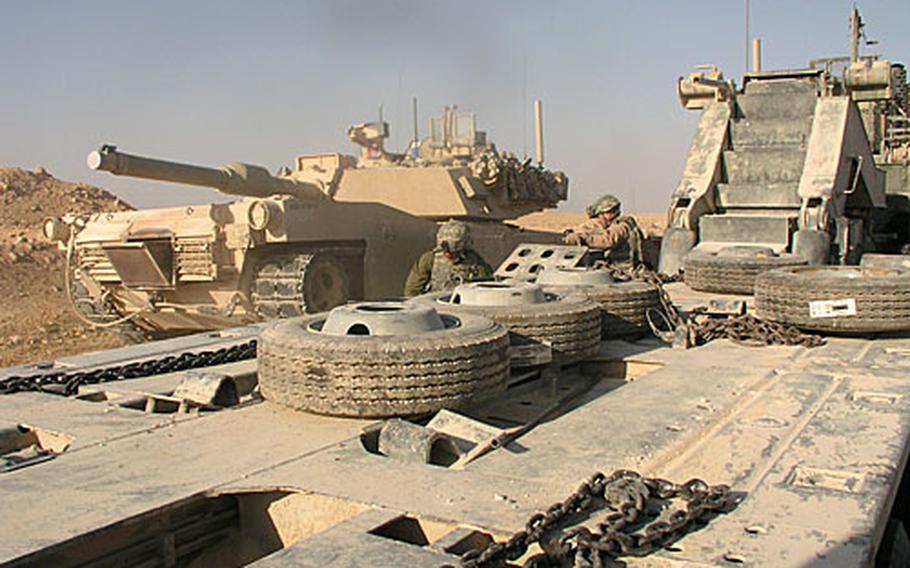 Soldiers with the 25th Transportation Company, 787th Combat Sustainment Support Battalion work speedily to get this Marine Corps Abrams tank aboard a trailer so their convoy can resume its trip in western Anbar province. (Franklin Fisher / S&S) 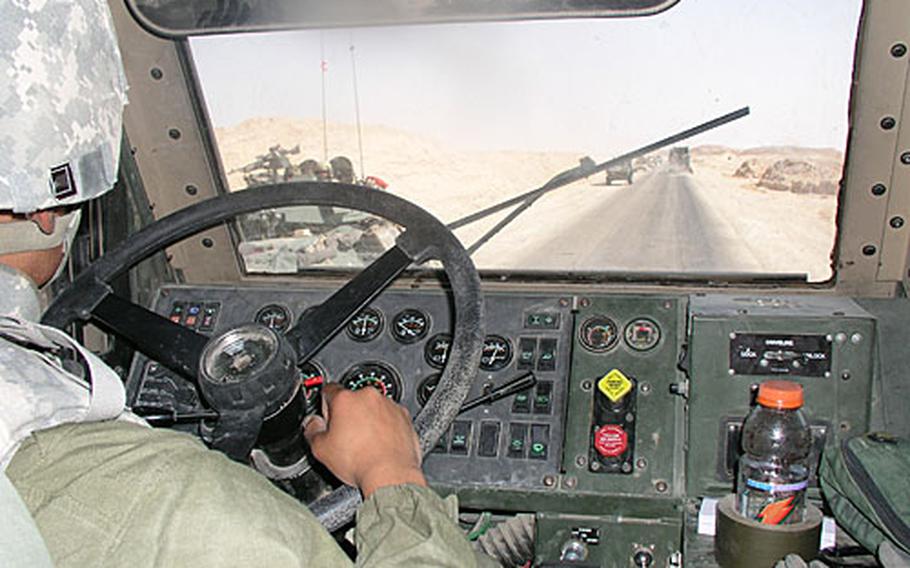 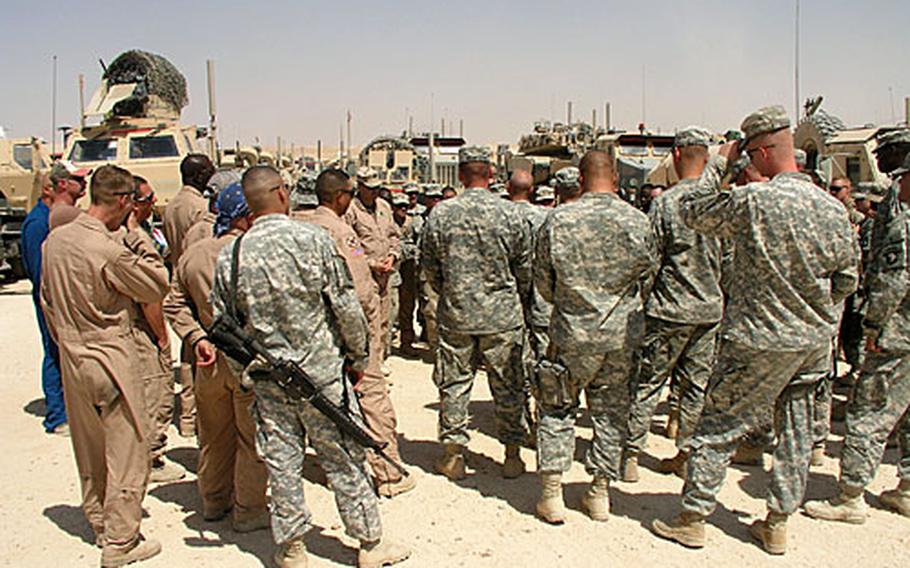 Members of a logistics convoy get a briefing at Combat Outpost Rawah in Iraq on before starting a 72- mile trip to Al Asad Air Base. Dozens of vehicles and soldiers, Marines, and some civilian drivers faced many challenges on what became about an eight-hour push across bad roads and uneven terrain in western Anbar province. The dangers of insurgent attack were underscored when what is believed to have been a roadside bomb exploded but malfunctioned, causing no injuries or damage to the convoy. (Franklin Fisher / S&S)

They&#8217;d left from there in the early morning and pulled into Combat Outpost Rawah before noon, hauling water, Gatorade, food &#8212; including fresh produce &#8212; and other supplies, as well as mail. The outpost is headquarters to Task Force Highlander.

For the return trip that afternoon, they&#8217;d be bringing back several Abrams tanks, belonging to the Marine Corps, among other cargo.

All of the convoy leaders and the truckers had too much experience to commit themselves to a definite arrival time at Al Asad.

But each convoy&#8217;s travel time depends on terrain and equipment problems. And there&#8217;s always the possibility of a roadside bomb or other form of insurgent attack.

For hours, soldiers and Marines labored in sweltering heat to prepare for the journey. They operated winches, adjusted hydraulics, made final maintenance checks, and made sure loads were secured.

The entire group gathered for a briefing. A soldier stepped forward and with all heads bowed, prayed for a safe trip.

Shortly after 3 p.m. they were under way.

And the way, as it turned out, was hard.

Two tires on one of the trailers hauling a tank on the paved highway blew out, coming off in shreds.

With most in the convoy ordered to stay inside their vehicles, Pope and several others went to work.

They chained the bad rims and raised them with hydraulics so the tractor-trailer could continue on.

And they unfastened the tank, had it drive off the bad trailer, readied an empty trailer, then guided the tank on.

Pope and several others bent to their grueling task. It was 6:33 p.m. by the time they were under way again. But then came other challenges.

One of the bridges they&#8217;d use to cross over a dry riverbed had been damaged by insurgents in the past, then repaired by coalition forces.

After a stop, it was decided to have the tanks drive off their trailers and cross the gap on their own while the rest of the convoy would go over the bridge.

Getting across the bridge was a tight fit.

By the time the three tanks were safely back on their trailers it was just before 8 p.m. and slowly getting dark.

At 9:11 p.m., the convoy was moving again. They traversed poor roads and narrow passages through uneven, broken terrain.

Finally, at about 10:40 pm., they could see the lights of Al Asad Air Base several miles out to the right.

It was then, just a few feet from Concepcion&#8217;s vehicle, that a large slow-moving flame loomed out of the darkness at about windshield height.

No one felt a blast, no one heard one over their engines. A faint smell of gunpowder lingered in the cab.

Pope radioed the convoy commander in the ASVs.

Some distance later they stopped, but, with no damage or casualties, they resumed the trip and drove through the Al Asad checkpoint.