For soldiers guarding civic building in Kirkuk, monotony is the enemy 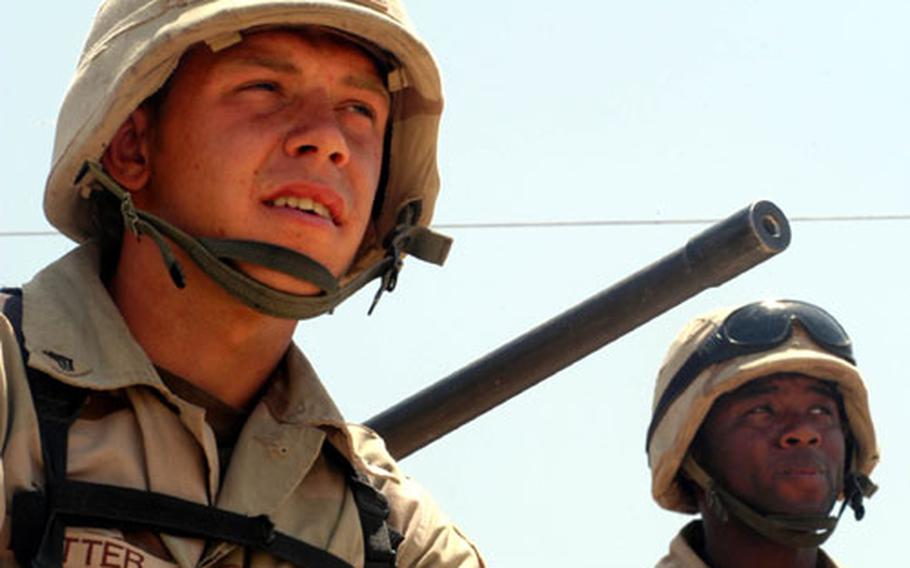 From the top of their M1A2 Abrams tank, Sgt. Nick Dutter, left, and Pfc. Herman Johnson of the 4th Infantry Division watch the streets leading to the front gate of the government building in Kirkuk, Iraq. (Michael Abrams / S&S)

From the top of their M1A2 Abrams tank, Sgt. Nick Dutter, left, and Pfc. Herman Johnson of the 4th Infantry Division watch the streets leading to the front gate of the government building in Kirkuk, Iraq. (Michael Abrams / S&S) 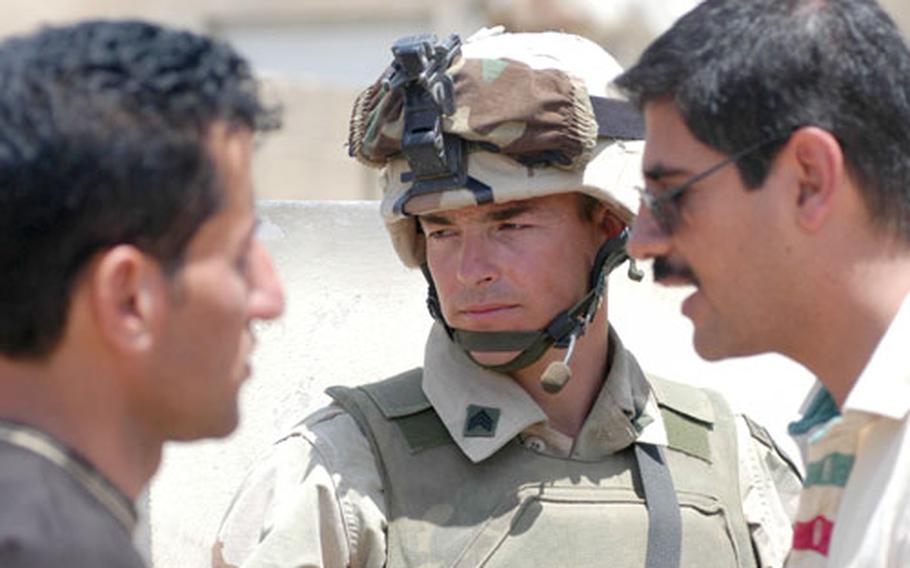 Sgt. Troy Ezernack keeps his eyes on the locals waiting to pass through the gate to the Kirkuk government building, as a translator, right, talks to the next person allowed through the gate. Ezernack, of the Vicenza, Italy- based 173rd Airborne Brigade, and his soldiers do hourlong shifts guarding the gate. (Michael Abrams / S&S) 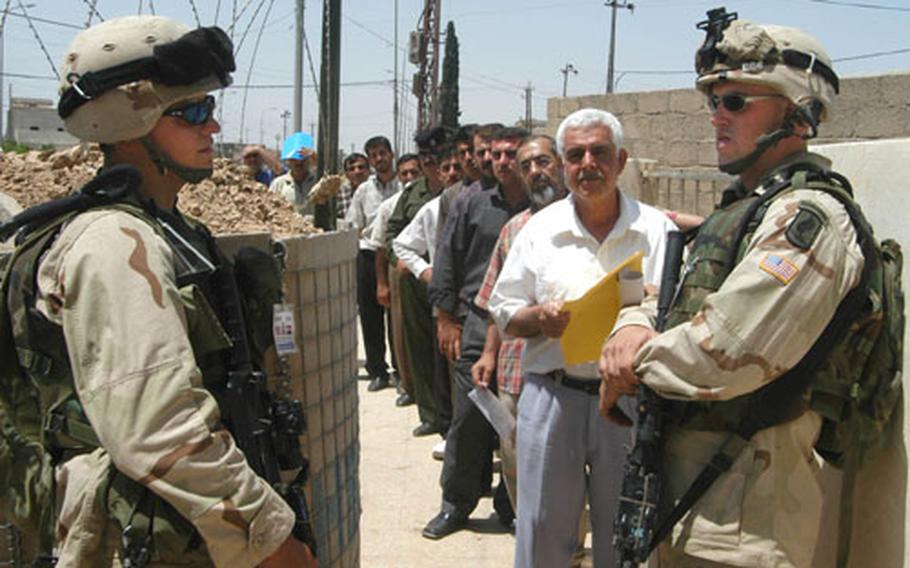 Pvt. Ernesto Perez, left, and Sgt. Ted Condit of the 173rd Airborne Brigade out of Vicenza, Italy, keep the locals in a line as they wait to enter the government building in Kirkuk, Iraq. Soldiers of the 173rd pull hourlong security duty six times a day at the front gate. (Michael Abrams / S&S)

KIRKUK, Iraq &#8212; Sgt. Troy Ezernack thought he&#8217;d heard it all from locals trying to gain access to the government building in downtown Kirkuk.

&#8220;They say they know where bombs are hidden, or where high-level Baath Party members are, or they know where chemical weapons are,&#8221; said the 37-year-old team leader assigned to the 173rd Airborne Brigade from Vicenza, Italy.

That laughter, although brief, helped break up the doldrums that has become synonymous with pulling the hourlong security duty six times a day at the civic center &#8212; often in the baking, 100-plus degree heat.

Daily, locals come in droves to the two-story white stucco building that will house the new interim 30-member provincial council elected Saturday. Some to conduct legitimate business such as applying for jobs or to get permits to carry weapons. Others to get a peek at the building that for decades had been off limits to anyone who didn&#8217;t serve in the Baath Party under the reign of Iraqi President Saddam Hussein.

The soldiers say the job is important, but if they had a choice, they&#8217;d be elsewhere.

Giahad Qader, 40, said through an interpreter he isn&#8217;t pleased soldiers bar his entrance to a municipal building he says should be open to the public, even if the streets of Kirkuk are not yet totally safe.

Catty-cornered to the entrance gate, Sgt. Nick Dutter, with the 4th ID, tries to find ways to make it through his three-hour shifts as he sits atop a M1A2 Abrams tank.

He and his teammate Pfc. Herman Johnson, 21, say they know &#8220;way too much&#8221; about each other, and the teasing begins. Actually, Dutter did most of the teasing, pointing out Johnson&#8217;s tendency to trip and the way he goes on about his fianc&#233;e, who is serving with the 4th ID in Tikrit as a cook.

The highlights of the soldiers&#8217; security details tend to be interactions with the children of Kirkuk, who also flock to the center. Except they come to gawk at the soldiers or ask about pop singer Michael Jackson.

In the beginning, the invading soldiers terrified 7-year-old Ayad Saddam. &#8220;Yes, at first I was afraid. But now I know they will not hurt me,&#8221; he said through an interpreter as he loitered near shoulder-high dirt barriers mostly topped with concertina wire.

Many of the soldiers are unhappy pulling guard duty.

Some days the doldrums can suddenly switch to the fever pitch felt in the heat of battle. Recently, a soldier with the 173rd was shot and wounded while on night patrol in Kirkuk.

Such is a day in the life of a soldier in a combat zone, Ezernack said.