For sergeant, deployment is a family reunion 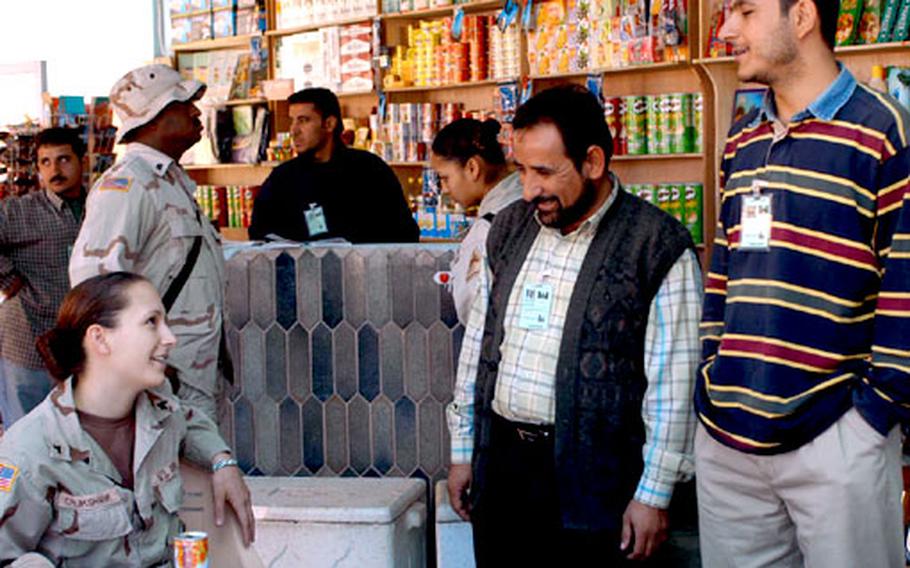 Sgt. Kristin L. Cruikshank chats with her step-uncle, Raad Al-Saraji, middle, and step-cousin Mohammed on Sunday at her base at the former Baghdad Island amusement park. (Kendra Helmer / S&S)

Sgt. Kristin L. Cruikshank chats with her step-uncle, Raad Al-Saraji, middle, and step-cousin Mohammed on Sunday at her base at the former Baghdad Island amusement park. (Kendra Helmer / S&S) 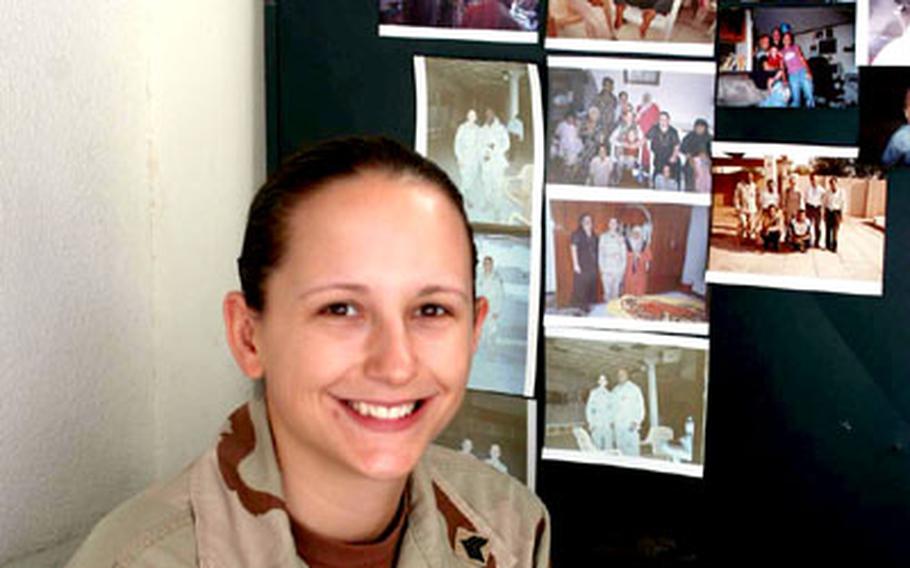 Sgt. Kristin L. Cruikshank, a cook with the 16th Engineer Battalion, 1st Armored Division, has photos of her family, including her Iraqi relatives, on the wall next to her bed. (Kendra Helmer / S&S)

BAGHDAD, Iraq &#8212; Sgt. Kristin Cruikshank walks into a shop run by Iraqis on Camp Ultimo, and the guilt trip begins.

The store owners, though happy to see her, complain it&#8217;s been four days since she has visited.

Cruikshank&#8217;s mother, Teresa, is married to Lateef Al-Saraji, who fled Iraq during the 1991 Persian Gulf War. When Cruikshank arrived in Baghdad in May with the 1st Armored Division&#8217;s 16th Engineer Battalion, she had an interpreter call her relatives, who live 10 minutes from her camp.

For the next two weeks she met with her stepfather&#8217;s brothers, using a dictionary and drawing pictures to communicate. On her 22nd birthday, they threw a party and brought a three-tier cake and kebabs to the base, located at the former Baghdad Island amusement park.

During their daily meetings, the Iraqis offered to help the soldier. But it was she who helped them by talking to her first sergeant and others about finding them work. In June, the family opened a general store on base &#8212; next to the post exchange &#8212; to sell snacks, cigarettes, rugs and DVDs.

Two months later, there was more reason to celebrate. Lateef and Teresa Al-Saraji were coming to Iraq. Lateef, 30, hadn&#8217;t seen his family for 13 years.

His brother and nephew picked them up in a taxi in Syria and drove 13 hours across the desert to Baghdad.

Teresa, 41, stayed with her in-laws and visited her daughter on base. The in-laws urged Cruikshank to visit them, since, unlike Teresa, the Iraqi women couldn&#8217;t go on base because the family wasn&#8217;t comfortable with the women being around male soldiers.

So Cruikshank went to their home. A convoy escort was arranged, just days before her mother&#8217;s three-week visit ended.

When the Humvees rolled down the street, children waiting for her ran up and yelled, &#8220;Kristin!&#8221;

During the visit, her relatives fed the soldiers standing guard.

Cruikshank&#8217;s mother returned to her home in Erie, Mich., in September. During a rally in Detroit to bring U.S. troops home, she described the living conditions of soldiers and Iraqis.

Cruikshank said it&#8217;s the mortar rounds hitting the camp every few days that worry her mother the most. During one attack, a mortar blasted near her, the hot metal slightly injuring a fellow soldier&#8217;s neck.

The past few weeks Cruikshank, who had been working as a cook at a mobile camp, has been in harm&#8217;s way more often. Her cooking duties over, she occasionally serves as an extra gunner on Humvees at a time when attacks against U.S. troops are increasing. More than 400 U.S. troops have died since military operations began, 281 of them since May 1, when President Bush declared major combat over.

Cruikshank, due to leave Iraq in May, plans to get out of the Army and return to school. Her brother, Theodore, a sergeant, is scheduled to deploy to Iraq in the spring.

Teresa hopes her son also is stationed in Baghdad, where she knows he&#8217;ll be well looked after by relatives.