The view from the porch of one of the new cottages at Oura Wan Beach. The seven cabins open for occupancy Aug. 1. (David Allen / S&S)

The view from the porch of one of the new cottages at Oura Wan Beach. The seven cabins open for occupancy Aug. 1. (David Allen / S&S) 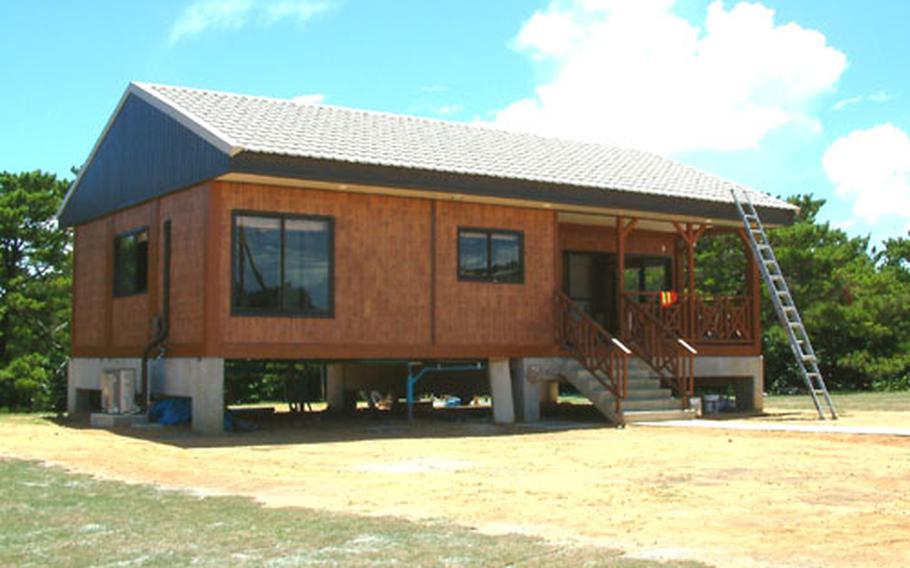 One of the new one-bedroom cottages at the Marines&#39; new resort facility on Camp Schwab, Okinawa. (David Allen / S&S) CAMP SCHWAB, Okinawa &#8212; This base in northeast Okinawa, a longtime home for Marine units on unaccompanied six-month deployments, will become the island&#8217;s newest resort destination.

Seven new cottages are being constructed on a hill overlooking Oura Wan Bay. They join the Okuma Recreation Center on the northwest coast and the Navy&#8217;s White Beach campground on the central east coast as recreational and camping facilities for Defense Department personnel.

The $1 million Marine Corps Community Services project is scheduled to open Aug. 1. There will be six one-bedroom cottages. There&#8217;s also a two-bedroom cottage for VIPs &#8212; flag officers and civilians above the GS-15 pay grade.

&#8220;This will be the most luxurious facility on the island,&#8221; Miner said. &#8220;Each cottage will be furnished with queen-sized beds and sofa sleepers and are positioned so each has a spectacular view of the beachside and ocean below.&#8221;

Guests at what is being called &#8220;Cottages at Oura Wan Beach&#8221; will also be able to charter private diving and fishing outings.

Ray Welch, camp services coordinator for Camps Schwab and Hansen, said MCCS has spent more than $100,000 for new boats and other water gear in conjunction with the construction project. Everything from sailboats to scuba and snorkeling gear can be rented.

Welch said the project was about a year in the making, although the idea&#8217;s been bouncing around for the past five years or so.

&#8220;The general has been stationed on Okinawa on four different occasions and always thought Oura Wan would be a great location for something like this,&#8221; she said. &#8220;It has the best view and the best beach on the island.&#8221;

&#8220;It&#8217;s something a bit different than the other facilities,&#8221; he said, comparing the cottages to the cabins and trailers at Okuma and White Beach. &#8220;These are more like Florida beach homes. Each one stands alone and is virtually typhoon-proof.&#8221;