For renaissance GI, wrestling and poetry go hand in hand 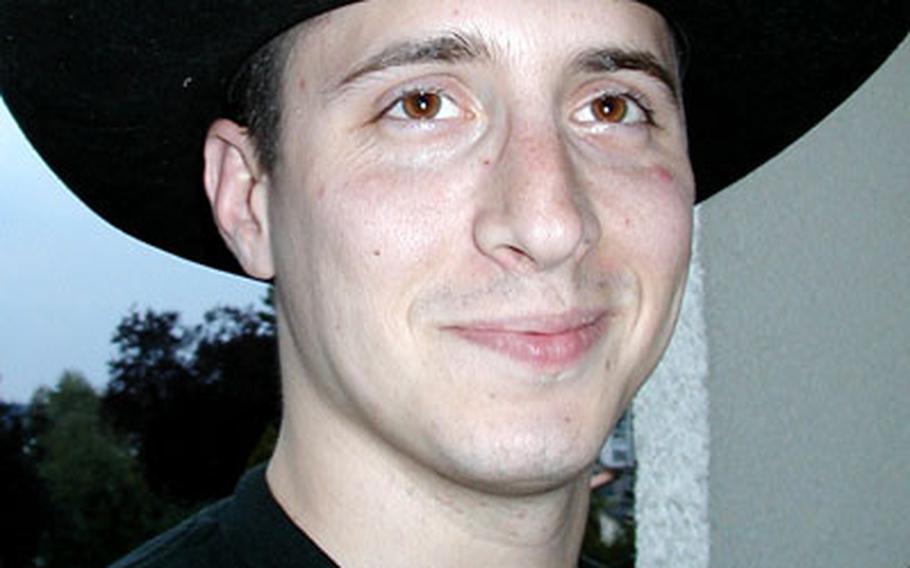 Inspired by pro wrestlers on TV, the “Jersey Cowboy” — aka Spc. Mikie Cotignola III — started wrestling as a teen in a ring he built with his brother, Davey, behind their house in Bridgewater, N.J. (Keiko Kuraya Liewer / Special to S&S)

SCHWEINFURT, Germany &#8212; With three years of military service and one war under his Nintendo joystick-shaped belt, Spc. Michael A. Cotignola III will soon end his Army career.

He has two goals, post-military: to wow the world of professional wrestling with moves like his self-invented &#8220;Crazy Flip of Death&#8221;; and to woo Americans into loving great poetry as a high school English teacher.

Some soldiers can strip to their shorts and body-slam a bad guy. Others can pen a soulful sonnet. Not many can do both.

That&#8217;s not all he can do. He played trumpet in his high school marching band back home in Bridgewater, N.J. He&#8217;s a devotee of the fantasy game Dungeons and Dragons, having led several 1-26 Infantry soldiers in a yearlong D&D marathon between combat missions. He plays Nintendo obsessively. And he&#8217;s nutty in love with his new German bride Nina, 19, who shares most of his passions.

Of all his interests, writing and wrestling came first. Even in grade school, he figured out how to get the vivid stories in his head onto paper. In one middle school class, the students kept creative-writing journals on a shelf for anyone to read. All the kids grabbed Mikie&#8217;s notebook first.

By high school he&#8217;d taken up poetry, attracted by its brevity and vivid language. He edited the school&#8217;s literary magazine and won his first girlfriend by reading her a love poem he&#8217;d written.

As a preteen he latched onto his other obsession, pro wrestling. He and his brother Dave, seven years older, watched it on TV every Monday. Although Davey dwarfed Mikie, they&#8217;d spend as much time wrestling as watching.

The pair built a backyard ring with discarded mats and some old chain-link fence. They&#8217;d practice moves copied from TV and make up their own. They kept at it through Mikie&#8217;s high school years &#8212; and he continued as he entered community college.

One night, Cotignola drove to south Jersey to a pro wrestling school, the Monster Factory, known for feeding talent to the big-time pro circuits. He wrestled as the &#8220;Jersey Cowboy,&#8221; the pint-sized good guy who regularly got whipped but won over audiences by gamely taking on the vilest of villains. He graduated from student shows to pro matches.

These minor-league circuits paid little more than gas money, he says, but they did give exposure and even TV time to wrestlers who grabbed the crowds.

By age 22, Cotignola had struggled with money through two years of college and saw no way to pay for the rest. He finally met with an Army recruiter he&#8217;d fended off since high school. On Sept. 11, 2002, he was in basic training, and the following spring he&#8217;d landed in Germany with a 1st Infantry Division unit everyone knew would soon head to Iraq.

Early in his Germany tour he met Nina Beger. Not much of a beer-drinker, he normally dodged his buddies on Friday nights to play video games at home, but one night he joined them at a club.

A female friend introduced him to Nina. They fell in love. Hard. He met her in May and proposed five months later. They both cried when he left in February 2004.

When not patrolling with his unit in a sector about 60 miles north of Baghdad, he spent some of his free time writing. His best friend, Spc. Nick Cademartori, persuaded him to join him in composing a then-anonymous weblog called The Questing Cat (www.thequestingcat.com) for Cademartori&#8217;s nickname. Cotignola, naturally, wrote under the handle Jersey Cowboy.

The blog drew a loyal following with its intense focus on the day-to-day experiences of soldiers at war. Readers praised &#8220;Cat&#8221; and &#8220;Cowboy&#8221; for maturity and insight beyond what might be expected from young soldiers.

Cotignola returned home in March, more determined than ever to follow his plan: marry Nina, go back to school and try pro wrestling again.

On Saturday, the two will fly home to start working on Cotignola&#8217;s other dreams. He&#8217;ll resume college next spring and hopes to start wrestling even sooner in spite of tendonitis that has forced him to wear braces on his wrists for months.