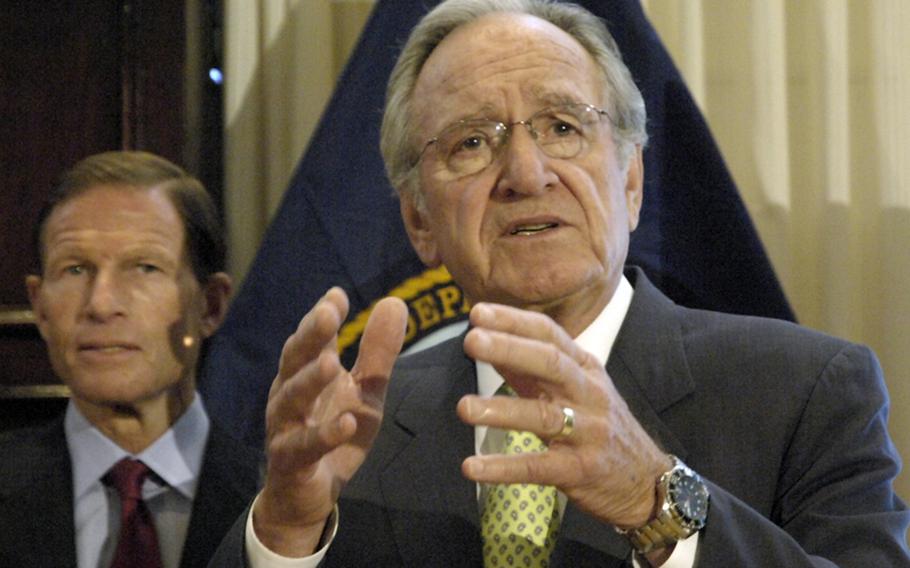 Sen. Tom Harkin, D-Iowa, chairman of the Health, Education, Labor and Pensions Committee, speaks at a news conference at the National Press Club in June. Listening is Sen. Richard Blumenthal, D-Conn. On Monday, Harkin's committee released a report blasting for-profit schools for putting their financial goals ahead of student education; a day later, the schools responded. (Joe Gromelski/Stars and Stripes)

WASHINGTON &mdash; As the negative press surrounding for-profit universities and underserved student veterans mounts, officials from those schools are pushing back to defend their business model as a valuable and unfairly maligned option for nontraditional students.

Presenting for-profit schools as an underdog group is a change in strategy in the education fight. For years, veterans groups critical of their policies and practices have lamented the deep pockets those schools have for marketing, recruiting and lobbying.

But now, industry officials are working to portray themselves as victims.

On Monday, Iowa Democratic Sen. Tom Harkin, chairman of the Health, Education, Labor and Pensions Committee released the results of a two-year investigation, blasting for-profit schools for putting their financial goals ahead of student education.

The report accused the schools of wasting billions in taxpayer dollars without providing any real value to most students, including many veterans who have exhausted their GI Bill benefits pursing degrees of questionable usefulness.

&ldquo;The vast majority of the $32 billion [of public dollars] invested in for-profit colleges in 2010 was squandered,&rdquo; Harkin told reporters. &ldquo;That can&rsquo;t be allowed to happen again.&rdquo;

But Steve Gunderson, president of the Association of Private Sector Colleges and Universities called the findings absurd.

&ldquo;If you really look at the report, you see this is the culmination of an ideological cause driven by the senator and his staff,&rdquo; Gunderson said. &ldquo;We ought to be looking together at how we can improve all of higher education. But if you look at his remedies and recommendations ... they would result in literally the end of private sector colleges and universities.&rdquo;

The latest fight comes just days after the Iraq and Afghanistan Veterans of America launched a new &ldquo;Defend the New GI Bill&rdquo; national campaign, which states that most for-profit schools are overcharging and under-educating students.

In June, the industry got another black eye when the marketing firm behind GIBill.com was forced to shutter that site and pay $2.5 million in penalties for deceptive advertising practices aimed at student veterans on behalf of some for-profit schools.

Delaware Attorney General Beau Biden, one of the officials behind the settlement, said at the time that he was advising students to avoid for-profit schools.

&ldquo;I don&rsquo;t have faith in them,&rdquo; he said.

For-profit schools have seen dramatic jumps in enrollment in recent years, with national figures swelling from less than 1 million in 2000 to almost 4 million today.

Officials from APSCU and private sector colleges say those numbers show the unmet education needs that their nontraditional schools fill.

Officials say they cater to students looking to get a degree while holding down a job, those unable to adapt to the lecture classroom setting, or those who simply prefer to take classes online. Veterans often fall into all three of those groups.

&ldquo;Our goal has always been to provide a quality, flexible, rigorous and relevant education,&rdquo; Mark Brenner, senior vice president of external affairs for the Apollo Group, said in a statement disputing the Harkin report. &ldquo;Our interest in a student&rsquo;s ability to graduate begins even before they enroll.&rdquo;

The Apollo Group owns several for-profit institutions, including the University of Phoenix.

But Harkin and other lawmakers have questioned whether for-profits are producing credible results. The report notes that even though the GI Bill was designed to help student veterans get a college degree for free, many veterans who attend classes at for-profits end up thousands of dollars in debt when the cost of tuition exceeds the program&rsquo;s $70,000 cap for private schools. And it notes that more than half of the students who enrolled in those schools in 2008 had dropped out by 2010, a figure significantly higher than traditional universities.

Gunderson calls those statistics misleading. He points out that the type of nontraditional students that the for-profits most often serve are, as a rule, less likely to complete a degree than a student who pursues a four-year degree straight out of high school.

&ldquo;This is nothing more than continued political attacks on private-sector colleges and universities,&rdquo; he said. &ldquo;Instead of joining the conversation about ways to expand access to post-secondary education, Senator Harkin is attacking schools.&rdquo;

IAVA, the harshest critic of for-profits among veterans groups, has pushed for a bill to limit the amount of federal money those schools can receive.

Industry officials have fought against the bill, and other legislation limiting how federal money can be used for schools&rsquo; marketing and lobbying efforts.

Even Harkin admitted that passing the legislation is unlikely. In June, at the GIBill.com press conference, Sen. Dick Durbin, D-Ill., said getting any meaningful legislation passed on education reform is impossible because the private-college industry &ldquo;owns every lobbyist in town.&rdquo;

Officials from those schools insist they&rsquo;re willing to work with Congress to sort out any dishonest institutions within their ranks.

Industry officials signed onto a bill with several veterans groups pending in the House that would mandate career and education counseling for college-bound veterans and better track student complaints. Ryan Gallucci, deputy director of the Veterans of Foreign Wars&rsquo; National Legislative Service, said officials there pushed to bring those schools on board with that legislation to bring more legitimacy to the effort, and hopefully find a path toward improvements.

&ldquo;The goal is to provide a better education experience for everyone,&rdquo; he said. &ldquo;This is a good step forward.&rdquo;

It may be the only step ahead, at least for this legislative session. Lawmakers on the Health, Education, Labor and Pensions Committee said they believe that bill could pass this year, but the fight for bigger reforms &mdash; and more restrictions on the for-profits &mdash; will likely bleed into the new Congress in 2013.