For Pacific troops, Halloween’s all about the gear 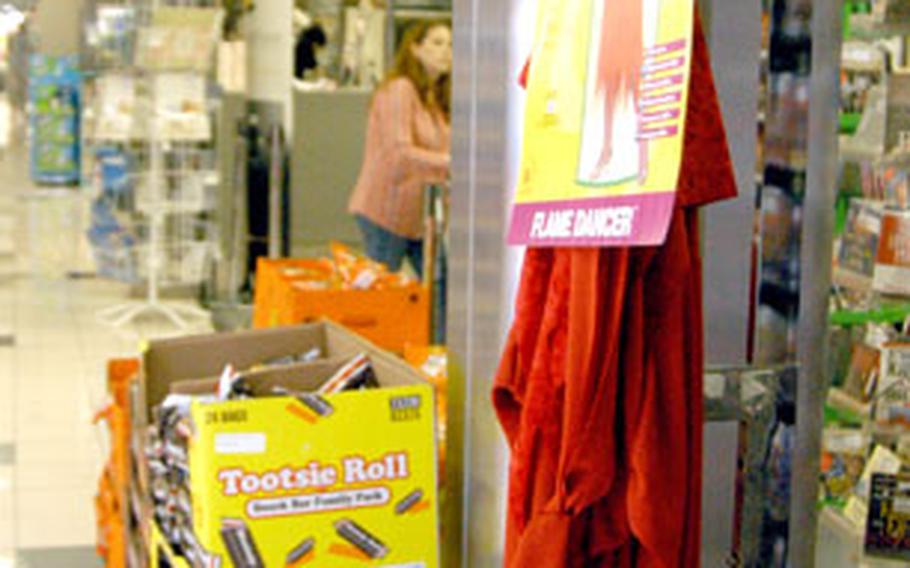 YOKOSUKA NAVAL BASE, Japan &#8212; When you were a kid, Halloween candy was free and costumes were either cute or scary. Sometimes both.

Halloween for adults is a whole different house of wax. No longer can you trick-or-treat with a pillowcase in hand, change costumes, then hit the same houses again, Lance Cpl. Daniel Erker from Marine Corps Air Station Iwakuni bemoaned Monday at Yokosuka. Then again &#8212; costume planning is simpler when you&#8217;re a grownup. Erker&#8217;s Halloween attire now consists of things lying around the house, he said.

As of Monday afternoon, only one costume remained at Yokosuka&#8217;s Navy Exchange &#8212; a testament to the holiday&#8217;s popularity among adults and kids alike, said Rusti Rausch, NEX operations manager for the Japan district.

Retailers are treated well this holiday, according to the National Retail Federation, with 64 percent of American consumers celebrating Halloween &#8212; a 10 percent jump over last year, Rausch added. It&#8217;s the sixth largest spending holiday, pretty impressive considering there is no gift giving involved, she said.

Chundric Terrell&#8217;s family doesn&#8217;t do Halloween for religious reasons, but the 33-year-old Defense Department civilian still has a costume picked out for someday, he said.

And if adults don&#8217;t want to pick their own costume, they have the luxury of living vicariously through their kids, said dependent Brynn Woods, 24. Her 2-year old son will hit the streets of Ikego as a skunk, she said.

All things considered, there&#8217;s only one downside of being an adult at Halloween, Bartter said:

&#8220;Now we have to stand in the check-out line and buy our own candy. I loved running up to each house and trick-or-treating as a kid. But once you get past a certain age, people start looking at you funny.&#8221;