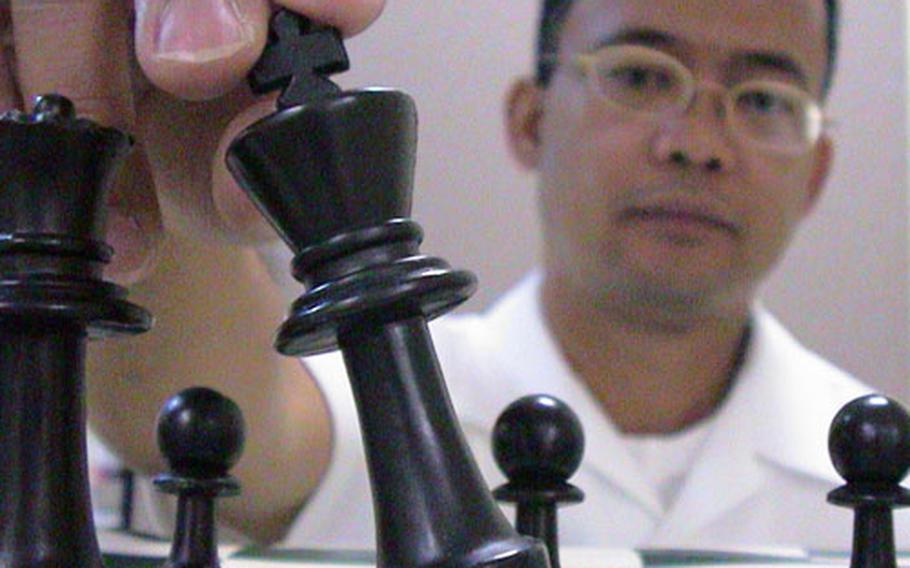 Petty Officer 1st Class Narciso Victoria recently won the military chess championships at Keesler Air Force Base, Miss. He will now be participating in the NATO championships in August. (Courtesy of U.S. Navy)

Victoria will be part of a six-member U.S. military team to compete in a NATO tournament next month. He will be joined by Tech. Sgt. Dan Ranario of RAF Mildenhall, England, the only other Europe-based servicemember who earned a spot on the team.

Victoria, an Olongapo, Philippines, native, has been playing chess for more than 30 years, having started when he was 11.

Victoria started playing in local tournaments by 13 and continued when he enlisted in the Navy 17 years ago.

He carries a U.S. Chess Federation ranking of expert and is three points shy of becoming a master, the second-highest USCF ranking behind senior master. Points, he said, are gained by playing in sanctioned tournaments.

In addition to his first-place win, he helped the Navy team tie the Air Force, who were two-time defending champions.

Chess players, he was once told, need three things to succeed: natural talent, a tremendous will to win and a great desire to study the game. He says that he can add &#8220;family support&#8221; to his successes.

Victoria also keeps his game fresh by playing with an Italian chess club and against other military and civilian members on base.

Victoria, who works as a team leader for customer service matters in personnel, started preparing for this year&#8217;s military championship right after last year&#8217;s tournament.

The NATO championships are Aug. 8-13 in The Hague, Netherlands. Last year Victoria placed fifth, losing only one match. This year, he hopes to place at least third.