For members of Comics on Duty, laughter is job No. 1 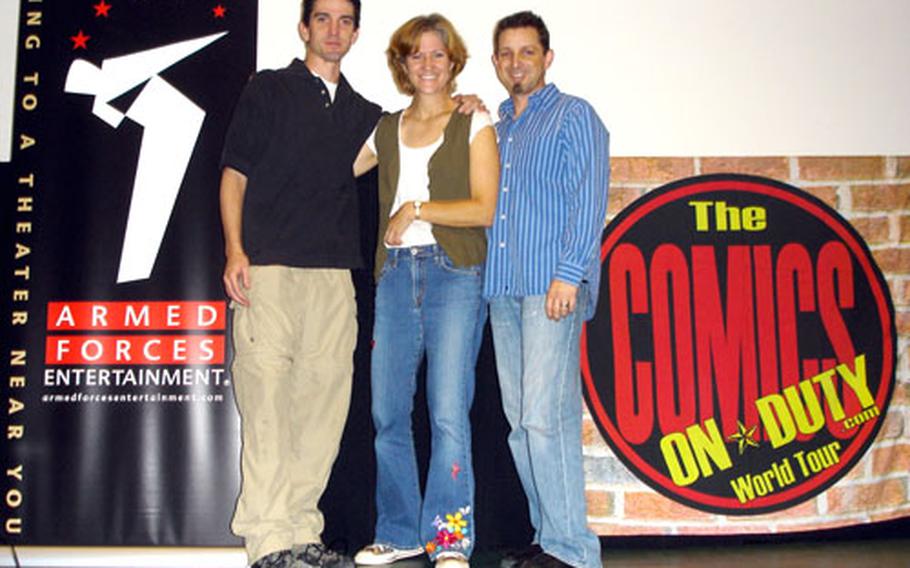 From left, Drake Witham, Karen Rontowski and James P. Connolly pose for a photo during their appearance in Naples, Italy, as part of the Comics on Duty tour this month in Europe. They will perform again in Naples on Monday. (Lisa M. Novak / S&S)

That question, posed by comedian Drake Witham, pretty much summed up the dilemma Friday night for the Comics on Duty at the Support Site at Gricignano in Naples.

They weren&#8217;t expecting half their audience to be children.

To their professional credit, the comics &#8212; Witham, Karen Rontowski and James P. Connolly &#8212; adjusted fire and managed to entertain the small group that filtered into the base theater for about an hour of stand-up comedy.

Granted, the younger ones probably didn&#8217;t understand all the jokes, but audience participation ensured everyone took ownership of the evening.

The Comics on Duty aren&#8217;t exactly under lucrative contracts for this project. Comedians volunteer their time to travel across the globe to entertain troops at various military installations, including stateside locations.

This particular group is familiar with military audiences.

Witham&#8217;s older brother was a Navy SEAL, which inspired him to join the tour.

Connolly served in the Marines as an infantry officer and credits his start in comedy to an order from his commanding officer.

His boss wanted him to prepare remarks for a function at which he was speaking.

Rontowski, a self-professed &#8220;baby- boomer hippie,&#8221; performs regularly at the Comedy Store and the Improv in San Diego.

Even when not &#8220;on duty,&#8221; the comedians work well together. Connolly hosts a show on XM Satellite Radio and will have Witham on as a guest after this tour.

The Comics on Duty show opened in Germany at the beginning of October before making stops in Kosovo and Bosnia-Herzegovina. After another show in Naples at Capodichino on Monday evening, the show will head to Greece, Portugal and Spain.