For Marines in Anbar province, the key is to patrol often and keep it personal 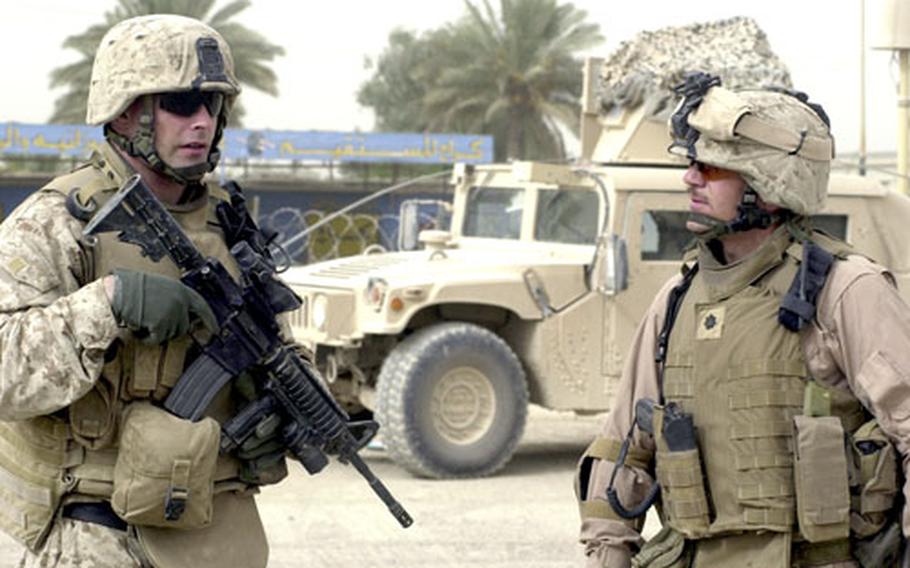 Lt. Col. Todd Desgrosseilliers, right, talks to one of his officers during a hunt for a fugitive connected to a fatal attack on a translator. Desgrosseilliers and other Marines working in Anbar are reviving age-old counterinsurgency tactics that require a heavy presence in the province’s most dangerous streets and neighborhoods. (Terry Boyd / S&S)

Lt. Col. Todd Desgrosseilliers, right, talks to one of his officers during a hunt for a fugitive connected to a fatal attack on a translator. Desgrosseilliers and other Marines working in Anbar are reviving age-old counterinsurgency tactics that require a heavy presence in the province’s most dangerous streets and neighborhoods. (Terry Boyd / S&S) 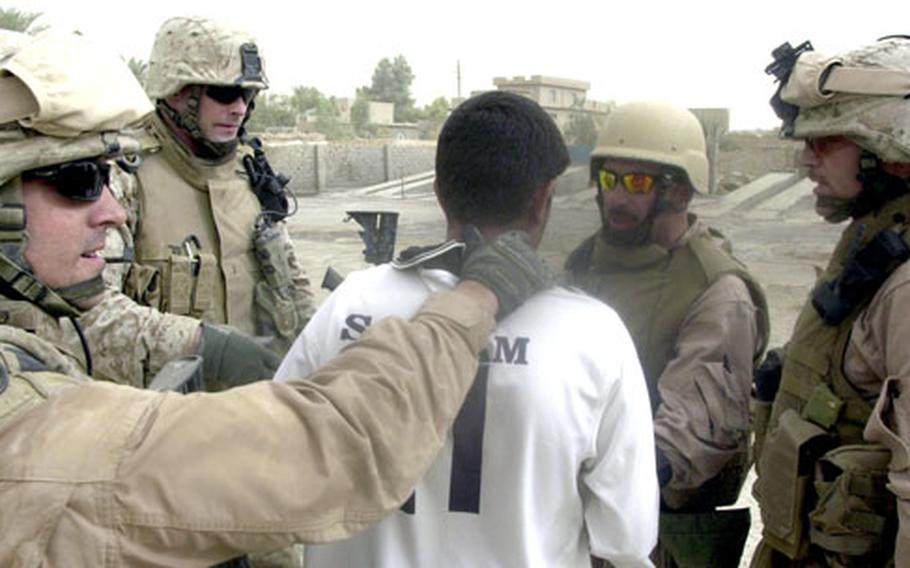 Marines question a teenager in Anbar province about a youth who had just fled and who may have been responsible for a rocket attack the previous day that killed an interpreter. Because he and his Marines are on the street constantly, Lt. Col. Todd Desgrosseilliers, far right, knew the boy and his parents. Rather than arrest the boy, Marines took him to his house and talked to his parents. The Marines were able to find the fugitive that night. (Terry Boyd / S&S)

HABBANIYAH, Iraq &#8212; Most of Ramadi is a war zone. On the city&#8217;s edge, Marines with the 3rd Battalion, 2nd Marine Regiment, fight insurgents daily. On the roads, troops based in Habbaniyah face roadside bombs nearly every day.

And yet, Marine after Marine here says a revival of classic Marine anti-insurgency doctrine is helping them turn the tide from a conventional fight toward a sophisticated anti-insurgency that is cutting into insurgent support.

&#8220;The more unorthodox and unconventional we are, the more successful we&#8217;re going to be,&#8221; said Lt. Col Todd Desgrosseilliers, 3-2 commander at Habbaniyah.

At the core of the tactics &#8212; chiefly drawn from the 66-year-old Marine Small Wars Manual &#8212; is striving to understand the enemy, not only to kill him, but also to contrast the U.S. stabilization mission against insurgent anarchy and cruelty.

&#8220;When I talk to [Iraqis], I call [insurgents] &#8216;the destroyers,&#8217;&#8221; Desgrosseilliers said. He and other Marines believe it is a mission for which their light-infantry force is uniquely qualified after 150 years of fighting small wars.

Many immerse themselves in counterinsurgency literature. Desgrosseilliers has the Marine Small Wars Manual bookmarked and underlined. He&#8217;s read &#8220;The Sling and the Stone: On War in the 21st Century,&#8221; the seminal book about the evolution of modern insurgency by retired Marine Col. T.X. Hammes, as well as books by Arabs inside the insurgency.

During the last three months, his Marines have begun using bold counterinsurgency tactics, putting companies on the streets of insurgent strongholds where they fight while finessing locals. Some small teams slip from house to house, paying families to put them up for brief periods.

Squad leaders liken the effort to campaigning for office back home: a street-level, round-the-clock effort to be a positive, responsive presence while going person by person, street by street, settlement by settlement between Ramadi on the west and Fallujah on the east.

The process of telling friend from enemy, and converting enemy into friend is nuanced and exhausting, Marines say, but may be the best chance for Anbar.

By all accounts, Anbar&#8217;s future hangs in the balance. Earlier this month, a leaked report by Col. Pete Devlin, chief of Marine intelligence, described Anbar as politically lost. Devlin recommended boosting funding and troop levels here by more than 10,000.

Yet, a week later, the New York Times reported that most of the sheiks in Anbar had pledged to fight the insurgency, indicating a backlash against the outsiders.

As a result, the hope of Iraqis greeting Americans with flowers has given way to the axioms of the Small Wars Manual: &#8220;Sapping the strength of actual or potential hostile ranks by the judicious application of psychological principles may be just as effective as battle casualties.&#8221;

Holding hard-won ground means using the local grapevine. Recently, after one of Desgrosseilliers&#8217; units cleared a canal-side road of bombs, he told one farmer it was safe to start using the irrigation pumps.

It also means differentiating U.S. forces from the enemy, which comes in and takes vehicles and homes. &#8220;If we can end that, and bring in some level of governance and social networks, we&#8217;ll regenerate that society, because that&#8217;s what people want,&#8221; he said.

Using the words &#8220;losing&#8221; or &#8220;winning&#8221; here lacks context, say officers and enlisted Marines. The situation is so multilayered it&#8217;s difficult to understand the rivalries between tribes, foreign fighters and indigenous insurgents. Many Marines on the ground complain Anbar tribes are at best indifferent, and at worst mercenary, in their dealings with Americans.

Even Desgrosseilliers says Marine anti-insurgency tactics are no panacea and would be difficult for other forces to adapt.

Warfare by the book

The Marine Small Wars Manual is like the Bible, says Lt. Col. Todd Desgrosseilliers. Open it, pick a passage and prepare to be amazed by the random relevance the 66-year-old manual has to Iraq in 2006.

&#182; Page 15, &#8220;Strategy&#8221;: &#8220;It will be difficult and hazardous to wage war successfully under such circumstances. Undoubtedly, it will require time and adequate forces. The occupying force must be strong enough to hold all the strategical points of the country, protect its communications, and at the same time furnish an operating force sufficient to overcome the opposition force wherever it appears.&#8221;

Other parts of the Small Wars Manual are obsolete; it was compiled in the 1920s and 1930s, and published in 1940, a product of the ages of telegraph and communications flags.