For Marines at Korean outpost, a holiday to remember 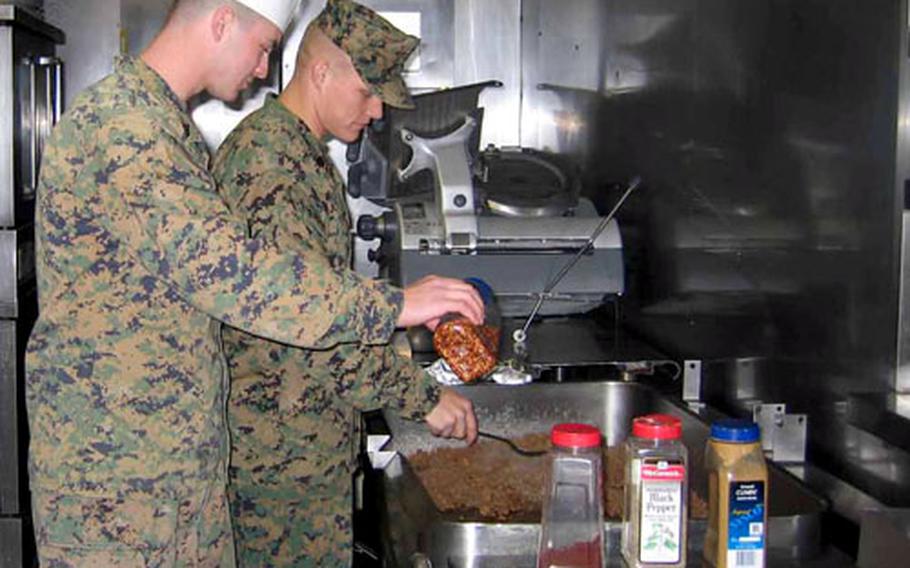 Cpl. Dave Tullos, right, with Sgt. Joseph Kast, Camp Mu Juk’s galley captain, tend the grill Thursday in the galley at the remote camp near Pohang, South Korea. The Marines are laying on a big holiday dinner and party Dec. 23 to be followed by a four-day weekend for the Marines and Navy Seabees stationed there. (Kristy Meraz / Courtesy of U.S. Marine Corps)

PYONGTAEK, South Korea &#8212; If the Marines at remote, austere Camp Mu Juk in South Korea have their way, the Christmas dinner and dance they&#8217;re preparing is one Marines and sailors based there may recall for decades.

Mu Juk is an 84-acre logistics base set among the rice fields of Ochon, a town about 20 minutes from the east coast seaport and steel-making center of Pohang.

Among the invited guests are local women the Marines have gotten to know.

Stationed at Mu Juk are 34 Marines and 23 Navy Seabees. The Marines are with the 9th Engineer Support Battalion, part of the 3rd Field Service Support Group; the Seabees, with Naval Mobile Construction Battalion 40, Detail Pohang.

Besides the local female friends, invited guests include the Ochon mayor and police chief, a group of Koreans who meet the Marines weekly for an exchange of language classes, and six sergeants major from the South Korean Marine Corps, Kast said.

It&#8217;ll be a chance for the Mu Juk Marines to get to know the group of Seabees who recently rotated in for their Mu Juk tour, he said.

&#8220;It helps the Marines and the new group of Seabees to get to know each other on a personal basis instead of on a work basis,&#8221; said Kast.

And it helps foster friendly ties with the Korean community.