For Marine, marathon on the Great Wall of China was grueling but rewarding 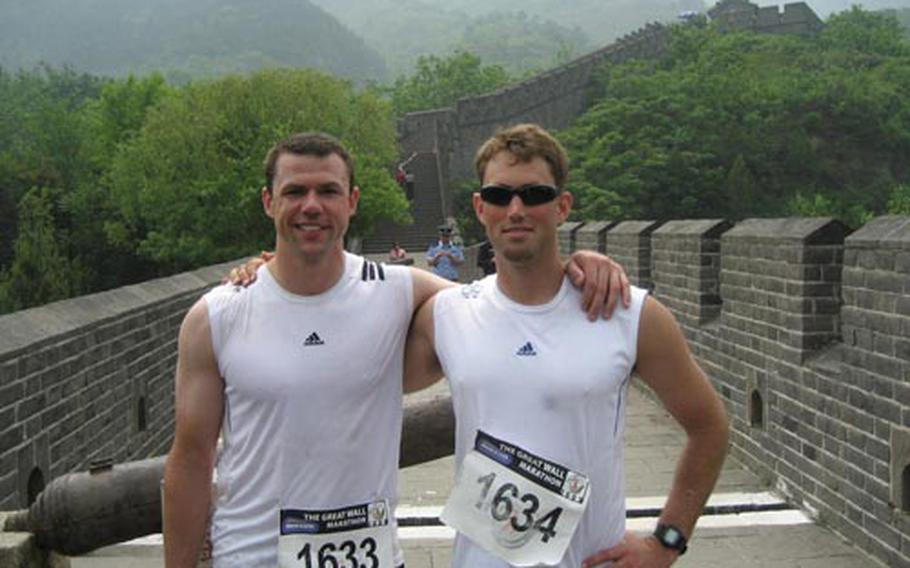 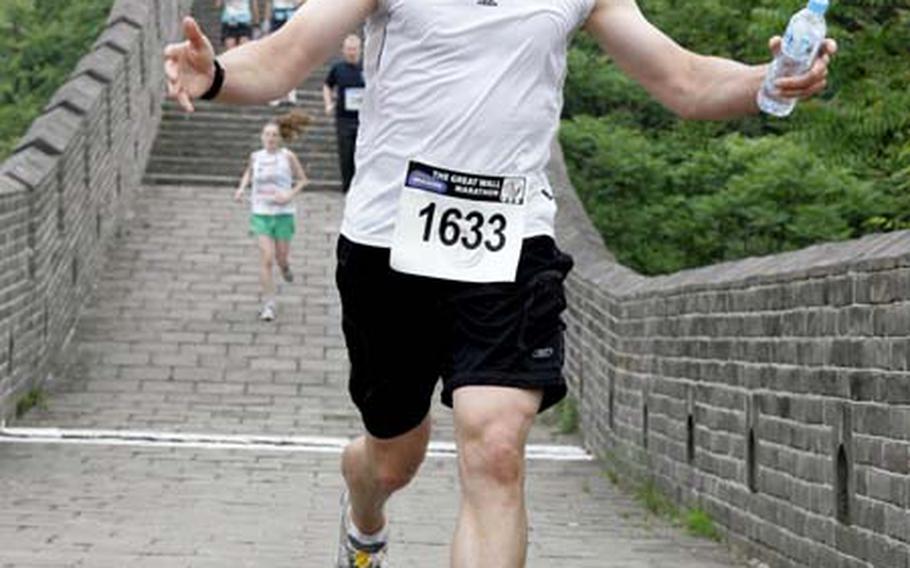 Marine Corps Capt. David Dixon runs the Great Wall of China Marathon on May 16. Dixon finished the 26.2-mile race with a time of 6:18:43. (Courtesy of marathon-photos.com)

CAMP FOSTER, Okinawa &#8212; Visiting the Great Wall of China is a once-in-a-lifetime experience for most.

It was for Capt. David Dixon, even if much of that experience is a little shrouded in the physical pain of running the Great Wall of China Marathon.

"It was certainly the hardest and most grueling physical accomplishment of my life," he said.

Dixon, 29, described the experience in a phone interview and an e-mail exchange with Stripes.

"Iwo Jima was a tough and emotional seven-mile hike," he said. "I&#8217;m certain that it hurt our marathon performance, but I&#8217;m glad we did it. It was a piece of our Marine Corps heritage that I will never forget."

Taut with soreness and excitement, they both had trouble sleeping the night before the race, Dixon said.

Walking along the "goat trails" sections of the wall to get to the starting line was "like Interstate 5 in San Diego during rush hour traffic" as you could only walk through one at a time, Dixon said.

As the race began, Dixon, Miller and Capt. Adam Gable, all pilots with the Marine Medium Helicopter Squadron 262 on Okinawa, waited about 20 minutes for the line to move.

"This was the only time during the race that I truly got to take in the wall, scenery and experience for its sheer awesomeness," Dixon said. "Most of the memories of the rest of the race are obscured by the physical pain I was in."

Only about six miles of the 26.2-mile race course was atop the wall; the rest wound through the small rural village near the wall.

"It was a surreal and almost overwhelming feeling to run a marathon on one of the seven wonders of the world," Dixon said. "The most exciting and maybe the most rewarding part of the race were the hundreds of local villagers who came out to cheer on and encourage the runners."

Despite drinking and eating throughout the race, Dixon still suffered severe muscle cramps in his quadriceps and abdomen.

During the last two miles, Dixon said, he suffered cramps in his right leg with every step.

"I pretty much dragged my right leg across the finish line," he said.

Though Dixon&#8217;s goal was to finish the race in less than six hours, he crossed the finish line in a little more than 6 hours and 18 minutes, 15 minutes after Miller. Gable completed the race in 4 hours and 56 minutes.

Looking back, Dixon said he was under-prepared for the race, because most of his training was done aboard the USS Essex during its two-month deployment this spring.

But training for distance races is how Dixon deals with the stress and tempo of deployments away from family, he said. He ran the Rock &#8216;n&#8217; Roll Marathon in San Diego two days after he returned from his first deployment to Iraq in 2007. He ran the eight-mile Dallas YMCA Turkey Trot after returning from his second Iraq deployment.

And he plans to keep on running.

His next goal is to run the Boston Marathon. After that, he&#8217;ll set his sights on the Reykjavik Marathon in Iceland and the Safaricom Marathon in Kenya to achieve his ultimate goal of completing marathons on all seven continents.