For many in uniform, the action's where it's at 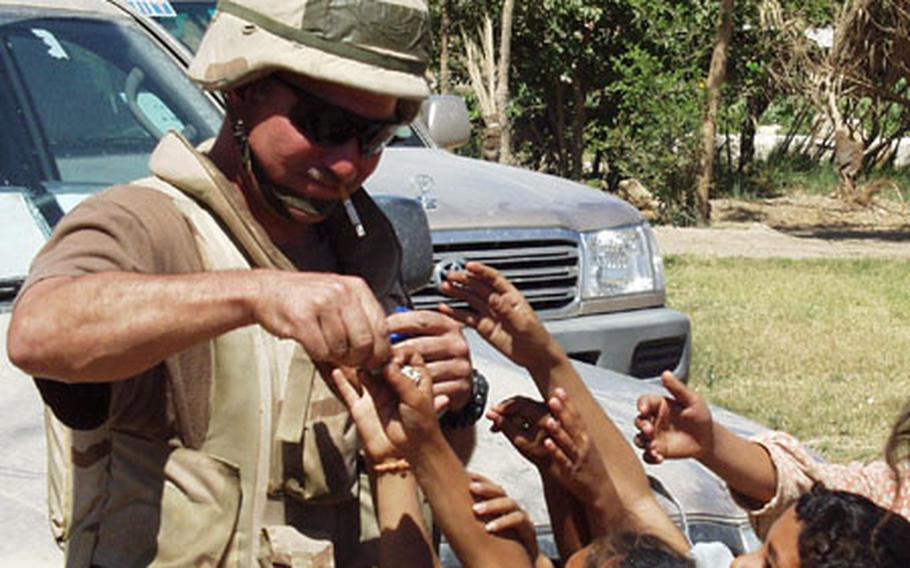 Master Sgt. Mo Mustafa, a member of an explosive ordnance disposal team in Iraq, hands out candy to children from a group of houses outside the walls of Baghdad International Airport during a bomb-clearing visit to the site. (Kent Harris / S&S)

Despite a breakneck pace, from everyday work and training to the war on terrorism and now occupation duty in Iraq, many in uniform say all the action is exactly what they signed up for.

His response to those who believe the tempo is too high and the number of missions is too great: &#8220;Maybe these people shouldn&#8217;t be in the military.&#8221;

After nearly five years as an enlisted man in which he never left the United States, 2nd Lt. Jacob Corlett switched sides. He joined the officer corps and is now at RAF Mildenhall.

His personal opinion doesn&#8217;t enter into it, he said. If the commander in chief gives the military a mission, then it must be done. That goes for current and future operations.

Others point to a moral necessity to help those in need, despite the military&#8217;s already heavy workload.

Monica Barnes, 31, an Information, Tours and Travel office employee from Los Angeles whose husband is a Navy weather forecaster, said, &#8220;I know certain things have to be done but [deployments] put a strain on the family. But he joined to do what needs to be taken care of.&#8221;

Whatever Bush decides about Liberia, say others, if the United States is going to get involved they hope it&#8217;s not at a half-step.

&#8220;I just don&#8217;t want to see it [operations in Liberia] last as long as with Iraq,&#8221; said Petty Officer 2nd Class Brian Stump, an aviation maintenance instructor in Sigonella, Sicily.

Staff Sgt. Jonathan Anlauf is a parachute rigger with the 100th Maintenance Squadron at RAF Mildenhall, a job that doesn&#8217;t let him deploy.

Anlauf has been in the Air Force for nearly five years and is aware of the rapid pace of life. But it didn&#8217;t stop him from signing up for another five years.

Airman Basic Jeanne Canales of the 100th Service Squadron at RAF Mildenhall knew, too, what she was getting into seven months ago when she joined the Air Force. But she said the possibility of multiple deployments doesn&#8217;t make her second-guess her decision to put on the uniform.