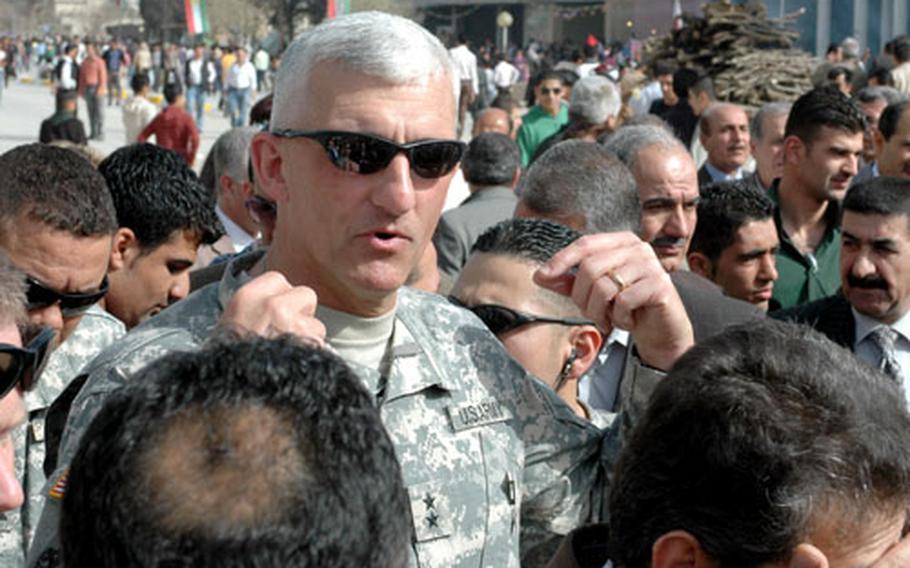 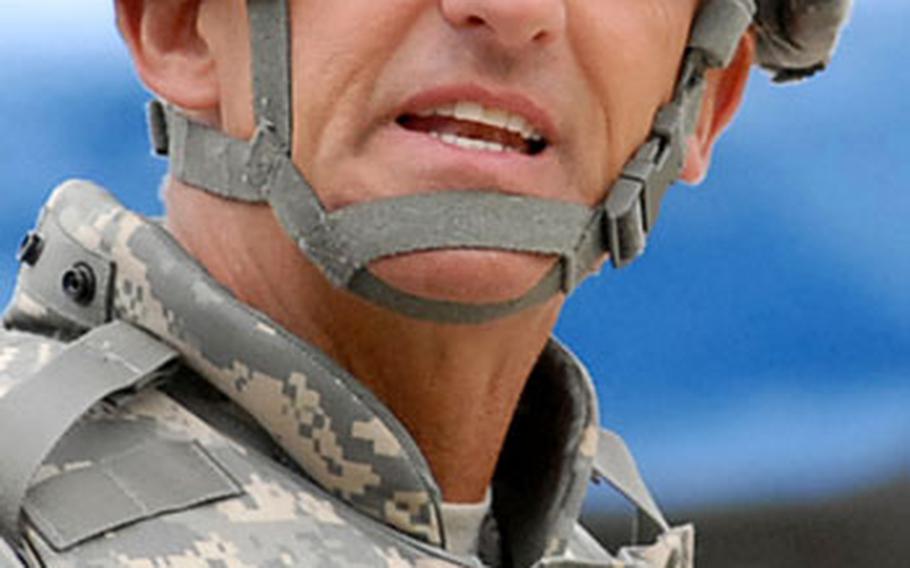 Maj. Gen Mark Hertling talks about a photo that shows a relaxed Command Sgt. Maj. Roger Blackwood talking to soldiers in Iraq. One of the soldiers was killed a short time later. The photo is one of Blackwood&#39;s and Hertling&#39;s favorite photos from the deployment. (Michael Abrams / S&S)

WIESBADEN, Germany &#8212; The setting said a lot about the man from Missouri.

With the sun shining and his office walls now largely void of plaques and pictures &#8212; a sure sign in the military that someone is coming or going &#8212; Army Maj. Gen. Mark P. Hertling opted to sit outside on a nearby park bench. Midwestern folk, such as he, believe a nice spring day is to be appreciated, not ignored.

And yet it wasn&#8217;t just the bench, but also where it was located on Wiesbaden Army Airfield that spoke to the gray-haired warrior.

"Which one do you want to talk about?" Hertling asked as he looked across Memorial Park and its assortment of memorials.

Across the way were two monuments dedicated to all the soldiers who died in Iraq while under the 1st Armored Division flag. Etched in the granite are the names of 227 soldiers who never returned from their Operation Iraqi Freedom tour. The division headquarters has deployed twice to Iraq.

"Pick a name," the commander said. "I can tell you stories about all of them."

Knowing Hertling, he probably could.

Over the past six years no soldier in Europe has spent more time at or near the center of U.S. operations in Iraq than Hertling. He served a tour in Iraq, led the Army&#8217;s training effort in Europe, then ran its plans and operations section before assuming command of "Old Ironsides," which subsequently headed back downrange.

On Tuesday he will pass the 1st AD guidon to Maj. Gen. Terry Wolff and return to the States for his next assignment.

In his new job, Hertling will serve as a special assistant to Gen. Martin E. Dempsey, a former 1st AD commander who now heads the Army&#8217;s Training and Doctrine Command at Fort Monroe, Va. Between them, they have spent more than five years in Iraq, and that doesn&#8217;t include their respective combat tours in the 1991 Persian Gulf War.

At the top of the agenda is training. The Army has been so focused on Iraq and Afghanistan, Hertling said, that soldiers&#8217; core competency levels, including things which could prove useful on the battlefield, "have been pushed aside a little bit."

Equally important is the implementation of new strategies hewed from lessons learned in both combat zones.

"In an extended conflict like this, each side is trying to gain an advantage one way or another," Hertling said. From a tactical standpoint, "staying ahead of the enemy is what is important."

That&#8217;s particularly crucial, he noted, when you realize the tactics being used against U.S. forces are what "we&#8217;ll probably see for the next couple of decades."

In 1991, he served as a cavalry squadron operations officer in Operation Desert Storm, where he received a Purple Heart and an Army Commendation Medal with "V" device for valor.

From October 2007 to December 2008, he served as commander of Multi-National Division&#8211;North, which encompasses pretty much everything north of Baghdad. The number of U.S. troops in his sector ranged from 25,000 to 30,000.

When the general and his 1,200-strong 1st AD headquarters staff arrived in Iraq in late 2007, the U.S. troop "surge" was well under way. Still, the number of attacks on coalition forces in Multi-National Division&#8211;North was disturbingly high, averaging about 1,800 a month, or roughly 60 a day. By the end of the tour, it was down in the mid-300s, according to Hertling.

Asked what he made of the recent spate of attacks in Iraq, Hertling said it&#8217;s hard to tell just yet. Terrorist cells certainly remain, he said, but sometimes it&#8217;s hard to differentiate between insurgent activity and attacks supported by Iraqi statesmen for political gain.

As far back as early 2003, when Hertling served as a director on the Joint Staff, he said senior military officials wondered among themselves "how much of a reduction in violence do we need to show" to accomplish the mission?

"You hate to say this but it is, after all, a Middle Eastern country," Hertling said. "There is violence in those cultures. There are kidnappings and, in some cases, parts of those cultures are still existing in the 15th century. So how much is enough of a reduction and when can [Iraqi forces] take it on their own? I don&#8217;t know."

Such candidness is vintage Hertling.

The general got a good, long look at Iraq&#8217;s emerging army and police force. With respect to the Iraqi police, Hertling said there weren&#8217;t enough of them in his area and those in uniform were only partly trained.

"When you think about what they do and how they do it as individuals, the training requirement for police is something we take for granted in a Western cultural," Hertling said.

The same could be said of the Iraqi judiciary system, which he said is lagging.

Iraq&#8217;s army is developing nicely, he said, but like the Iraqi police force, things will take time. Of the five Iraqi army divisions in Multi-National Division&#8211;North, each was quite capable in basic operations and command and control, Hertling said. But he added the melding of multiple elements, from aviation to intelligence, has a ways to go.

"People were being placed in positions because of who they know versus what they know," Hertling said of his time in Iraq. "That will gradually improve. All new armies have that. It will eventually come around."

Born in St. Louis, Hertling had a modest upbringing. His dad was a salesman and his mom worked as a secretary. The youngest of three kids, his parents didn&#8217;t have enough money to pay for his college, as they had for the older two, so he worked to win a swimming scholarship to Notre Dame or Purdue. In the end, he chose the U.S. Military Academy at West Point.

First AD Command Sgt. Maj. Roger P. Blackwood served in Iraq with Hertling. He saw daily how at ease the boss can be with people. He can engage a group of Iraqis one moment, banter with a private the next and then move on to a distinguished visitor.

"He has that ability to connect with people at all levels," Blackwood said.

About a month into their 2007-08 deployment, Rodriguez once had the occasion to ask Hertling about his habit of huddling with a soldier, particularly when the senior leader ventured outside the wire. Always in the vicinity, Rodriguez would noticed the general scribbling on a 3-by-5 white index card as he visited with a private, specialist or lieutenant.

Turns out, Hertling was gathering names, phone numbers and addresses that he would use to reach out to a soldier&#8217;s family. For those on the home front, getting a hand-written letter from a two-star general who just made contact with your soldier in a war zone has to make a lasting impression.

"Every day it was somebody different," Rodriguez said. "He would make it a point to talk to the guy in the back of the crowd, or someone at the lowest rank."

Hertling has two sons and a daughter-in-law in the Army. Each has served two tours in Iraq and a third is looming, so he can empathize with parents who have children in harm&#8217;s way.

"The weight of that is not only on his mind, but in his heart," Blackwood said.

The sergeant major recalled how he and Hertling spent from sunrise to sundown traveling to bases and outposts visiting troops on Thanksgiving Day 2007. It was important to Hertling, Blackwood said, to also touch as many remote locations as possible.

"Every decision he made was made with the soldier in mind," Blackwood said. Hertling "puts himself in that foxhole."

Sitting on the bench in Memorial Park, Hertling mentions several fallen soldiers whose names are etched into the most recent Operation Iraqi Freedom memorial. They include people such as Spc. Rachael Boswelt, whom Hertling believes is the first female soldier to receive two Purple Hearts; Maj. Andrew Olmsted and Capt. Thomas J. Casey, military trainers who were ambushed in Diyala province; and Cpl. Luke Runyan, who once asked Blackwood whether his three decades of service "was worth it." Runyan re-enlisted soon afterward, and then died a couple of days later.

"There was a time a couple of years ago where I thought we were going to break the Army. I don&#8217;t think that anymore," Hertling said.

Now the general is glancing back at the memorials. He mentions his favorite line from the movie "Saving Private Ryan" and his eyes really well up. The "Earn this" line is uttered by Tom Hanks&#8217; character, Capt. John H. Miller, to another soldier.

"Our job," he said, "is to go back out there and make their sacrifice matter."