For logistics units, events in Iraq underscore need to be battle ready 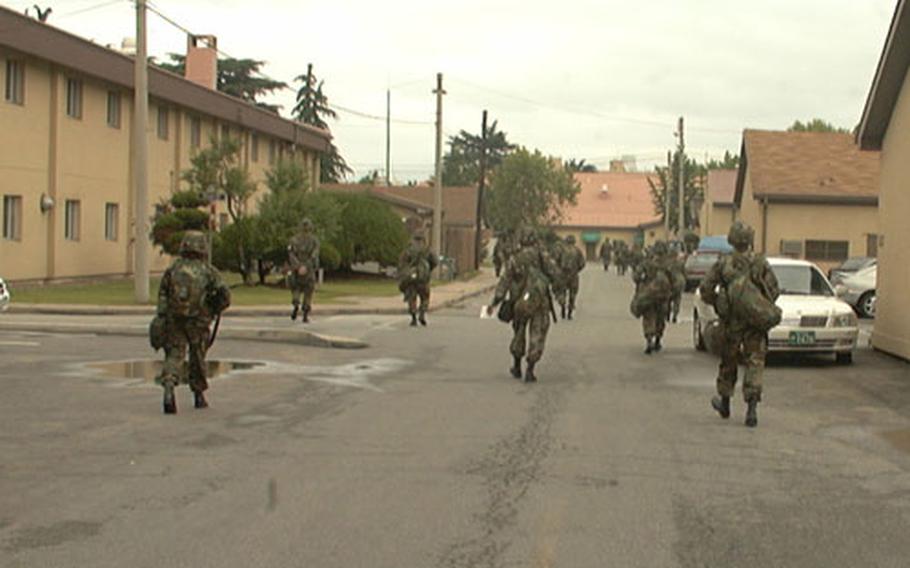 Logistics soldiers of Army&#39;s 20th Support Group move along street at Camp Henry in Taegu, South Korea last May during training session in techniques of base defense. Unit leaders say events in Iraq show how important such battle-focused training is for logistics troops. (Franklin Fisher / S&S)

Logistics soldiers of Army&#39;s 20th Support Group move along street at Camp Henry in Taegu, South Korea last May during training session in techniques of base defense. Unit leaders say events in Iraq show how important such battle-focused training is for logistics troops. (Franklin Fisher / S&S) 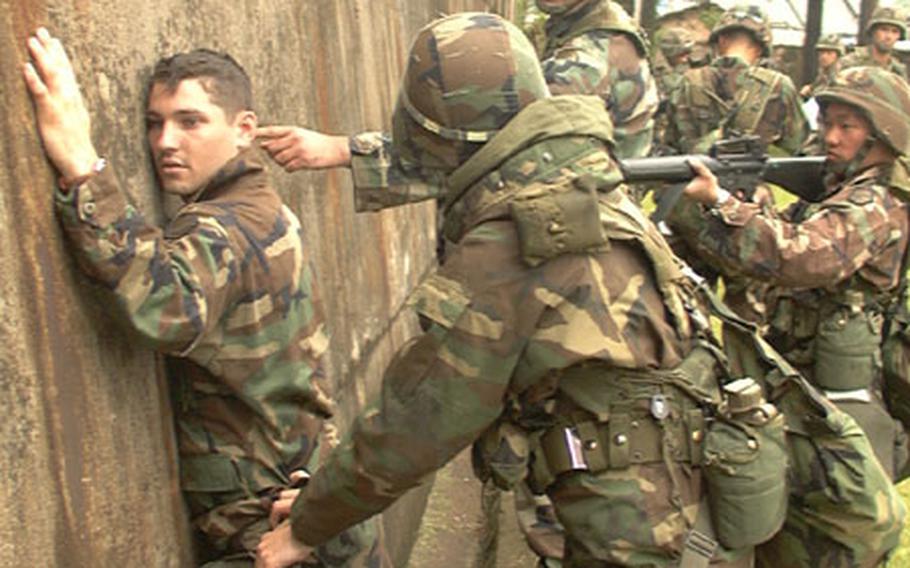 Weeks before U.S. and British armored columns began racing across Iraq, a U.S. logistics convoy in South Korea rumbled out of a unit motor pool shortly after midnight. The convoy was heading north through the cold night to train with combat troops it would support in wartime; practicing the mission the soldiers&#8217; counterparts in Iraq soon would have to accomplish.

For Pfc. Demond Hicks and his fellow soldiers of the 194th Maintenance Battalion, the nearly four-hour trip from Camp Humphreys near Pyongtaek to a 2nd Infantry Division training area was uneventful.

Hicks, a fuel specialist, sat between the driver and another soldier in the cab of a five-ton fuel truck. A chance to chat. A few scheduled rest stops. And no worries about a wrong turn &#8212; just follow the vehicle ahead.

So news that a U.S. Army logistics unit in Iraq was ambushed March 23 near Nasiriyah came as a sobering reminder that &#8220;rear-area&#8221; support troops need to be battle-ready.

Logistics units support the &#8220;war fighters&#8221; &#8212; the rifle squads, the armored columns, the fighter and bomber squadrons &#8212; with the supply, maintenance and transportation backup they need to keep fighting. They&#8217;re known as CSS troops, for combat service support. They haul the ammunition, food and fuel to the war fighters. They repair the vehicles, aircraft, radios and other hardware used in battle. And they work as cooks, clerks and in a host of other CSS jobs.

&#8220;The ambush of that logistics convoy in Iraq did certainly punctuate the fact that logistics troops can find themselves in harm&#8217;s way,&#8221; said Army Maj. Gen. Jeanette K. Edmunds, commander of the U.S. military&#8217;s main logistics unit in South Korea, the 19th Theater Support Command in Taegu.

And &#8220;that punctuating only underscores the appropriateness of the kind of battle-focused training that we owe our soldiers here in Korea,&#8221; said Edmunds, who since taking command last summer has set training as her top unit priority.

&#8220;There is no room for a &#8216;rear-area&#8217; mind-set, unless that mind-set is one that acknowledges that in war, being in the rear area or in the vital logistics lines of communication may well be the most dangerous place to be,&#8221; Edmunds said. &#8220;You don&#8217;t have to be a superpower to realize that the quickest way to make your opponent run out of combat capability is to keep him from getting his sustainment.&#8221;

A U.S. commando raid later rescued Army supply clerk Pfc. Jessica Lynch from an Iraqi hospital in Nasiriyah and recovered 11 bodies, nine of them Americans. The Pentagon said eight of the dead were in the ambushed convoy, though it is not yet known whether the ambush caused their deaths.

&#8220;I read that there was a convoy that was ambushed and there were some POWs,&#8221; said Spc. Marlene Butler, 21, of Headquarters and Headquarters Company, 20th Support Group in Taegu. Like Lynch, Butler&#8217;s a supply clerk.

&#8220;It&#8217;s paying dividends because our soldiers are actually getting to see some of the issues, real-world, that we really train on,&#8221; said Army Lt. Col. Kevin McRee, commanding officer of the 194th Maintenance Battalion, Hicks&#8217; unit.

Making logistics troops realize that they&#8217;re as potentially vulnerable as combat troops has emerged within the past year as a training concern for leaders in U.S. logistics units throughout South Korea.

In Headquarters and Headquarters Company, 20th Support Group, troops practiced taking and processing enemy prisoners of war, moving in formation when under fire, and setting up defensive perimeters, among other battle routines.

As the company continues that training this year, sergeants likely will draw on the Iraq war for examples of what logistics troops need to be ready for.

&#8220;Even if,&#8221; Edmunds said, &#8220;we don&#8217;t feel a high likelihood that we&#8217;ll be going to war here in Korea&#8221; logistics troops stationed in South Korea can move on to their next assignment &#8220;and find themselves immediately in a unit that is heading to Afghanistan or Southwest Asia, where they will certainly be in an active combat zone &#8212; that is no time to start learning the basic soldier skills that will keep you alive.&#8221;