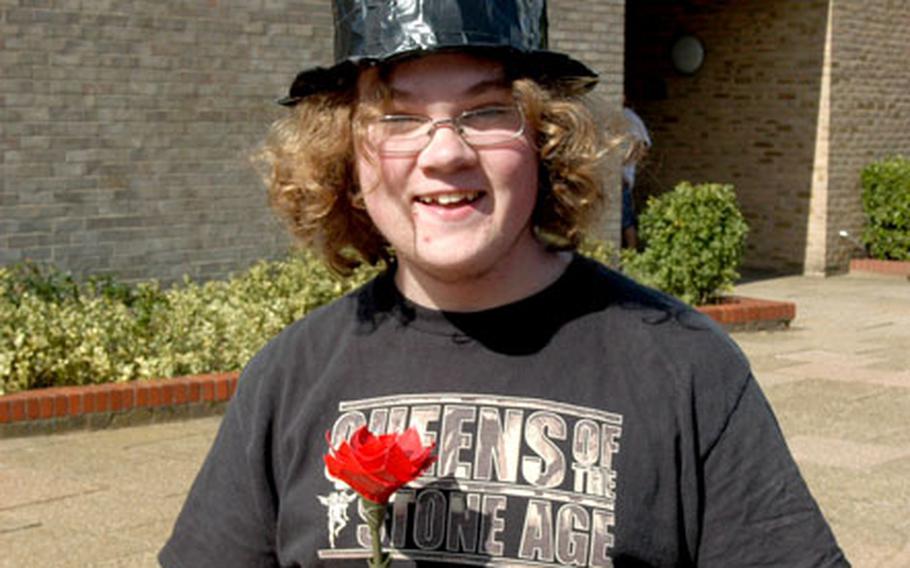 Lakenheath High School senior Joseph Hutton, known on campus as Duct Tape Man because he fashions items, such as roses and his hat, from the tape. (Russ Rizzo / S&S)

Stars and Stripes UK talks with Joseph Hutton, 17, a senior at Lakenheath High School who is better known as &#8220;Duct Tape Man&#8221; for the wallets, hats and roses he fashions out of the stuff.

I think it sticks to everything, really.

I think you should go on to maybe the sheet of duct tape.

Be honest. Have you ever tasted duct tape?

Kind of plastic and string and kindergarten glue.

Did you taste glue as a child as well?

Have you ever thought of branching out to packing tape or clear tape?

I want to do clear tape to make ID inserts so you can see through it.

Word is that you&#8217;ve made roses for girls on campus. Any luck with that?

Any big plans for the future?

Is chaffing an issue?

I&#8217;m going to put cloth on the inside. Hopefully it will feel quite nice.

What is a duct?

Have you ever seen [duct tape] used on an actual duct?

My mother used it on a faucet once.