For Kadena pilot, 'The threat was there, it was real.' 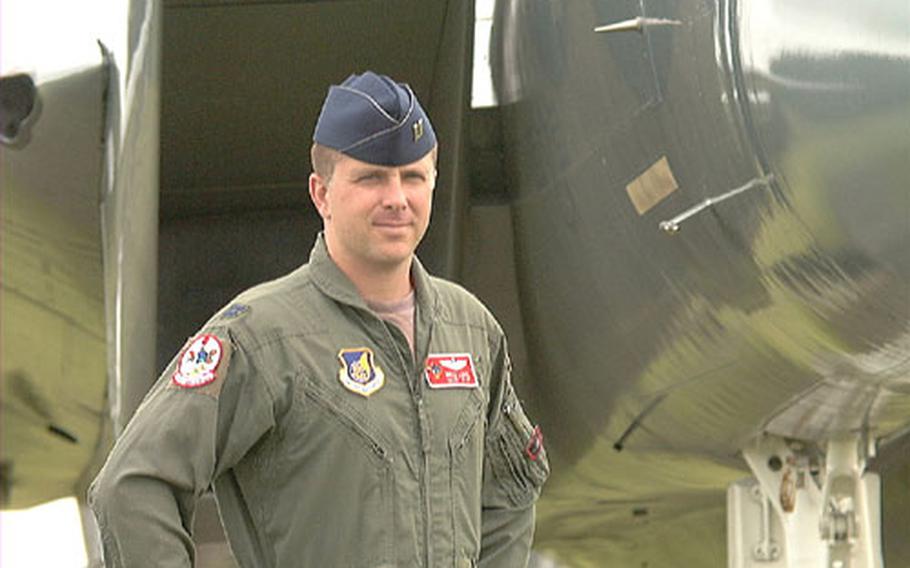 Capt. Mike Love poses before an F-15 Eagle. He is one of many Kadena-based F-15 pilots who maintained air superiority over Iraq during the recent war. (Carlos Bongioanni / S&S)

Forget the barrage of surface-to-air missiles and anti-aircraft artillery he dodged every day flying combat missions over Iraq.

The F-15 pilot from Kadena&#8217;s 67th Fighter Squadron never fired a single missile during the recent war in Iraq, although his job was to shoot down enemy aircraft that threatened coalition aircraft or ground troops.

That the Iraqis didn&#8217;t send up any aircraft to engage wasn&#8217;t too disappointing, the 10-year Air Force veteran said.

Love and his squadron deployed to Saudi Arabia in December as part of Air Expeditionary Force 7/8 in support of Operation Southern Watch &#8212; a deployment that was later extended indefinitely.

While enforcing the no-fly zone over southern Iraq, the pilots often received anti-aircraft fire from Iraqis on the ground, Love said.

But it was nothing compared to what came at them when the war broke out in March, he added.

Although the job didn&#8217;t change much, &#8220;what we saw out in front of the canopy did,&#8221; Love said, referring to all the missiles and artillery rounds coming at them.

An ROTC cadet during the 1991 Persian Gulf War, Love said he was utterly captivated watching CNN video clips of U.S. pilots getting shot at while flying night missions over Iraq. First-hand, he said, was much more intense than anything on TV.

&#8220;The threat was there, it was real. But with the increased action on the ground, there was an increase in vigilance to mitigate any feelings of apprehension.&#8221;

The biggest challenge, Love said, was avoiding complacency during his daily eight- to nine-hour sorties.

While they achieved air superiority by keeping all Iraqi aircraft grounded, the pilots had to stay ever vigilant, he said, to ensure they didn&#8217;t target any coalition aircraft.

Before coming to Kadena in 2000, Love finished F-15 fighter training at Tyndall Air Force Base, Fla., where he was one of three Air Force pilots whose training became the subject of a documentary.

That video project eventually provided the framework for &#8220;American Fighter Pilot,&#8221; a CBS-TV reality series in which Love was a co-star.

The series documented the true account of how Love almost flunked out of the fighter school but became the &#8220;top gun,&#8221; or best student pilot of his class.

CBS yanked &#8220;AFP&#8221; from its spring lineup last year after two airings, because of poor ratings.