For ground forces in Iraq, help from above 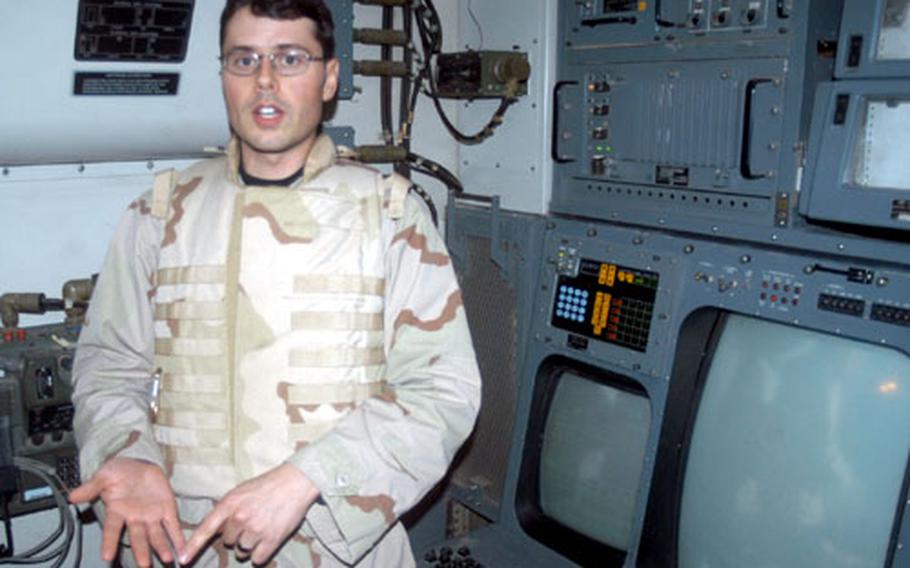 Capt. Stuart Williamson of the 332nd Expeditionary Air Control Squadron at Balad Air Base, Iraq, explains some of the equipment used to track aircraft in the country. The squadron can speedily help ground troops get needed air support. (Ron Jensen / S&S)

Capt. Stuart Williamson of the 332nd Expeditionary Air Control Squadron at Balad Air Base, Iraq, explains some of the equipment used to track aircraft in the country. The squadron can speedily help ground troops get needed air support. (Ron Jensen / S&S) 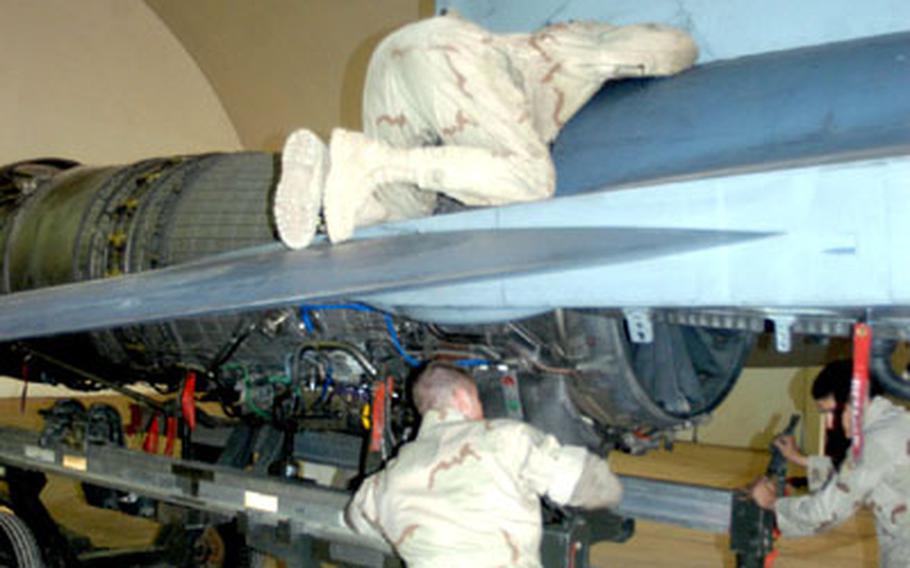 Members of the 332nd Expeditionary Aircraft Maintenance Squadron change an engine in an F-16 Flying Falcon at Balad Air Base, Iraq. The squadron keeps the aircraft flying to help troops on the ground. (Ron Jensen / S&S)

BALAD AIR BASE, Iraq &#8212; Every day in Iraq, soldiers or Marines on the ground find themselves under fire.

Convoys are attacked along a lonely highway. Patrols catch the deadly eye of snipers. Something. Somewhere. Daily.

When it happens, the ground pounders get help from above.

But the pilots who put munitions on target are only part of the process.

The Air Force has 2,500 people at Balad, living along with the Army and sharing many of the same risks, which is unusual for the flying service. Through it all, the standard Air Force mission of providing cover for troops on the ground gets accomplished.

Inside four modules a bit larger than walk-in closets is equipment linked to several radar stations around the country. Screens tell controllers where the aircraft &#8212; as many as 70 at a time &#8212; are flying. Everything from fighters and tankers to cargo aircraft and commercial airliners fill the skies over Iraq.

The controllers track them all and provide the information to the Air Force&#8217;s Air Support Operations Center and the Marine&#8217;s Direct Air Support Center. The centers&#8217; locations cannot be revealed for security reasons.

For the controllers, the mission is one of constant vigilance. At any moment, something could happen and troops could need air support.

The controllers also track tankers flying overhead, directing thirsty fighters to the nearest one, Courtney said, &#8220;so the [air] support can stay there as long as the people on the ground need it.&#8221;

Furthermore, controllers have to watch civilian traffic because Baghdad&#8217;s airport has been open for several months to civilian aircraft.

Sometimes a Jordanian airliner, for example, might be flying through an area where air power is needed.

That requires coordination with air traffic controllers in the country, a job now being done by other Air Force members.

But even in those dark, cool modules, lit by glowing screens, the squadron members feel a part of the battle on the ground.

Tech. Sgt. John Chestnut is one of 23 members of the Ohio Air National Guard&#8217;s 123rd Air Control Squadron who volunteered when their unit was given the mission.

This may be a common mission for the Air Force, but it is performed from an uncommon location &#8212; the center of a country engaged in war.

Ordinarily, the airmen and aircraft would be a comfortable distance from the fight, across a national border or two, using their extended reach to assist the cause.

In this war, that&#8217;s not possible. So the Air Force makes its home in Balad where mortars and rockets have been as common as chipped beef for breakfast.

An airman was killed by a mortar blast in April. Another was severely wounded in September.

More recently, Tech. Sgt. David Hogden of the 332nd ACS was wounded when a mortar shell landed 15 to 20 feet from where he was riding a four-wheel all-terrain vehicle.

&#8220;This is a unique experience for, I&#8217;d say, 99 percent of the people out here,&#8221; said Capt. Lindsay Droz, commander of the 332nd Expeditionary Aircraft Maintenance Squadron. Back home at Hill Air Force Base, Utah, it is known as the 421st Aircraft Maintenance Unit. About 150 members of the unit are at Balad Air Base.

The job is the same for the maintainers wherever they are: keep the F-16 Flying Falcons airworthy. Weimer said the motivation in Iraq might be greater because the missions are real, &#8220;not just Utah training ranges.&#8221;

One thing that does make the maintainers stop is the alarm that warns of mortar or rocket attacks. Staff Sgt. Jerome Knights said work ceases until the all-clear is sounded.

The fliers, too, who are trained to go into harm&#8217;s way, are adjusting to life in a war zone.

But, he said, when the jets are needed, they are needed now, not later.

The missions are mostly close air support, putting ordnance on targets within a few hundred meters &#8212; or closer &#8212; of friendly troops.

Sometimes, however, the presence of an F-16 screaming low over the area is enough to bring the threat to an end.

There is a risk, Langford said. The country is teeming with anti-aircraft artillery and surface-to-air missiles that are not kind to fighter jets. No aircraft have been hit by fire during the close air support missions, but it is one more thing to think about while doing a hard, dangerous job.

The satisfaction, however, trumps the risk.