For families, the wait gets longer 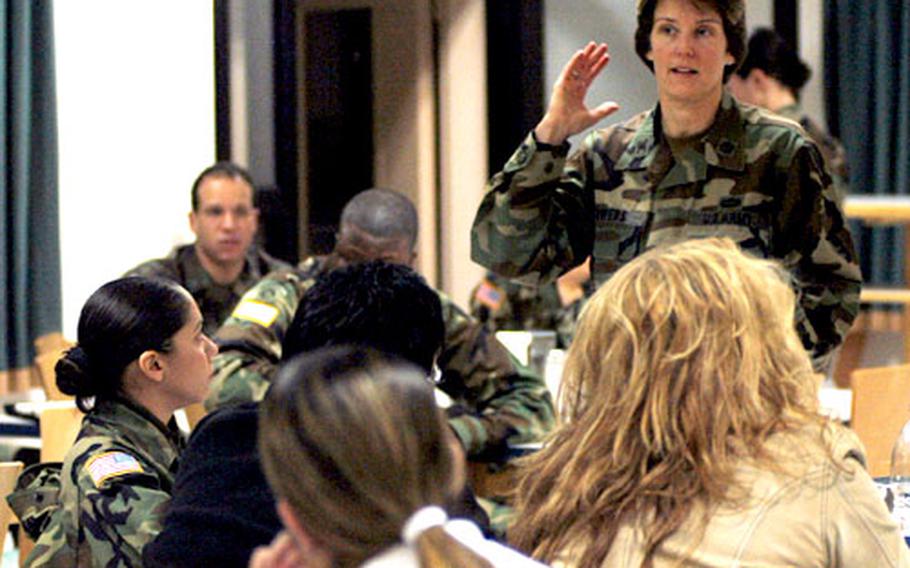 During a meeting Wednesday at Kleber Casern in Kaiserslautern, Germany, Col. Susan Sowers, commander of the 37th Transportation Command, informs family members of the 66th Transportation Company that the unit has received a two-month deployment extension in central Iraq. (Ben Murray / S&S)

During a meeting Wednesday at Kleber Casern in Kaiserslautern, Germany, Col. Susan Sowers, commander of the 37th Transportation Command, informs family members of the 66th Transportation Company that the unit has received a two-month deployment extension in central Iraq. (Ben Murray / S&S) 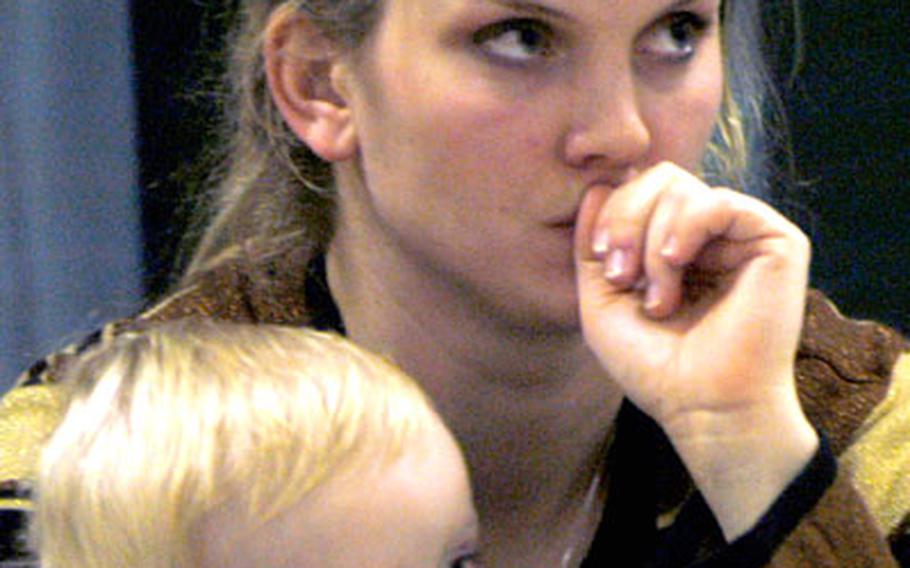 Ulrike Reinhardt and her son, Noah, listen to Wednesday’s announcement in Kaiserslautern, Germany, that the 66th Transportation Company will not return from Iraq until March, the result of a two-month tour extension. The extension, which includes Sgt. Philip Brown, Reinhardt’s husband and Noah’s father, is part of a plan to increase troop levels in Iraq during the country’s Jan. 30 election. (Ben Murray / S&S)

KAISERSLAUTERN, Germany &#8212; Christmas will come in March for Ann Rieger and her four daughters.

The family had already put off the event until January, but now they&#8217;ll have to wait until early spring.

The Riegers are among the families waiting for members of the 66th Transportation Company to return to Germany after the unit&#8217;s yearlong deployment to Iraq. But Army officials announced Wednesday that those 156 soldiers are among thousands of troops being extended downrange for 60 days to bolster U.S. forces for Iraq&#8217;s Jan. 30 elections. The 66th is the only Europe-based unit to be extended.

Family members were told of the extension Wednesday at a meeting at Kleber Casern. Under the DOD plan, the unit will spend 33 of those 60 days at its current location, Forward Operating Base Speicher, north of Baghdad.

While the news visibly shook some, many said they were prepared for the extension after hearing about it from their husbands.

Others took the news harder.

Army officials had a dozen support personnel on hand Wednesday to offer legal, logistical and emotional assistance to family members. Questions from the spouses generally revolved around paperwork, payment and power of attorney details associated with the delay.

One detail that irked family members about the extension is that it does not start until Jan. 31, 2005 &#8212; a week after the company&#8217;s one-year anniversary at Forward Operating Base Speicher.

Sowers said that pushing the extension&#8217;s start date past the one-year mark is a move by the Army to get a few extra days out of an experienced unit.

No matter how long it takes for the 66th to come home, however, Rieger said her children are all right with waiting for Christmas if it means they can celebrate it with their father.