For disabled Okinawa kids, there's no therapy quite like the furry kind Moritsugi Yonaha and Sophie share smiles during a therapy dog visit at the Okinawa Children Development Center in Okinawa City. Sophie is one of the four therapy dogs from the U.S. military community who visit the center&#39;s residents every Saturday. (Chiyomi Sumida / S&S)

Moritsugi Yonaha and Sophie share smiles during a therapy dog visit at the Okinawa Children Development Center in Okinawa City. Sophie is one of the four therapy dogs from the U.S. military community who visit the center&#39;s residents every Saturday. (Chiyomi Sumida / S&S) 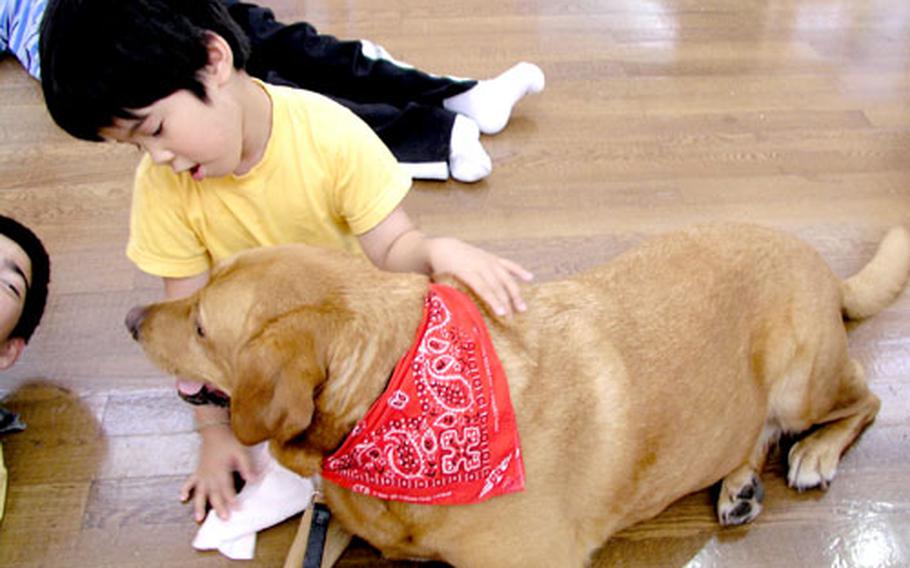 OKINAWA CITY &#8212; As some special Okinawan children know first-hand, there&#8217;s no better therapy for a needy human than a dog with a sunny disposition.

Therapy dogs and their human companions from the U.S. military community on Okinawa have been shedding such warmth among residents at the Okinawa Children&#8217;s Development Center for two years. The facility is for mentally and physically challenged children, many who live there permanently.

Visiting the center one recent Saturday were two Labrador retrievers, Mika and Schatz, with their owners, Air Force Capt. Thom Geiser and his wife, Daisy. Joining them were a golden retriever named Shadow, and Sophie, a Maltese, and their owners, Army Maj. Lee Hilgartner and his son, Nick, a sixth-grader at Zukeran Elementary School on Camp Foster.

Some of the 80 residents hugged and kissed the dogs. Others kept their distance but also kept their eyes glued to every movement the dogs made.

Most of the residents were unable to talk because of cerebral palsy. &#8220;But their faces brighten whenever they see the dogs,&#8221; said Hiromi Hisano, a counselor at the center.

Resident Kazuya Uehara, 7, immediately warmed up to Mika and snuggled on the floor with the dog. In another corner, Moritsugi Yonaha, 29, gave a treat to Sophie.

He and his wife, a certified dog trainer and evaluator for the American Kennel Club&#8217;s Canine Good Citizen program, started the therapy dog visits to the center two years ago. They ran similar programs when they were stationed in Germany and New Mexico.

Daisy Geiser said it takes a lot of work to train a therapy dog.

Nick Hilgartner said he decided to undergo the training with Shadow after attending Daisy Geiser&#8217;s dog-obedience classes on Kadena Air Base and she commented on how diligently he worked with his animal.

His father said the dogs seem to know when they are coming to the center and what is expected of them. &#8220;Their whole attitude changes and they become very calm,&#8221; he said.

Hisano said residents look forward to spending time with dogs each week. &#8220;When they first started to visit here, most of the children were only staring at the dogs,&#8221; Hisano said. &#8220;But with each visit they started feeling more and more comfortable. &#8230; At first, they would just come near the dogs. Then, gradually they started to touch them.

&#8220;Now they ask frequently about when the dogs will be coming. And when they learn that the dogs are not coming that day, some even start crying.&#8221;