For dinner party, Army cooks dress up their dishes 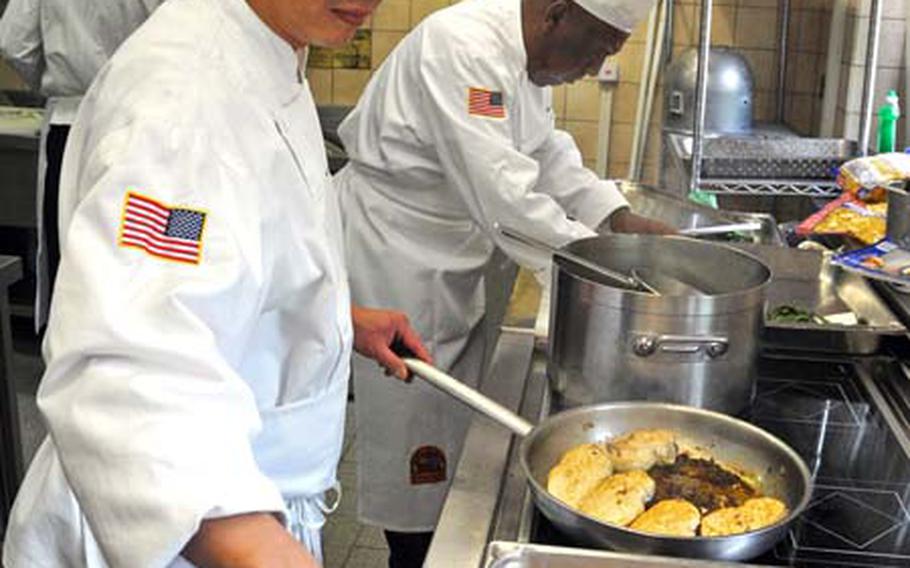 HEIDELBERG, Germany &#8212; In a tent at Fort Lee, Va., with little more than some onions and potatoes and a whole red snapper looking at him, Daniel Trawick got started.

Trawick, a former Army cook turned civilian supervisor of a Hohenfels, Germany, mess hall, and whose favorite personal meal is Popeyes fried chicken, had an hour to prepare a four-course meal.

"A four-course meal in an hour, and they gave me a whole fish," Trawick said. "I had to scale it, clean it ... but when I saw the fish there, my eyes just got happy," he said, because he likes to cook fish.

His snapper &#8212; the main course for Trawick in the "Live Cooking" event at an annual competition for military cooks and chefs last month &#8212; went on to rest on a plate with onion white wine sauce. It was accompanied by potatoes, which was cut on seven sides and looked, he said, "like little footballs."

Spc. Julio Garcia, a cook in the Katterbach dining facility, was at the annual 34th U.S. Army Culinary Arts Competition at Fort Lee last month, too. Like Trawick, he was part of U.S. Army Europe&#8217;s culinary team.

He competed in a couple of categories, but said he was most proud of what he did in "Cold Dessert."

Not only could he not just serve up bowls of Ben and Jerry&#8217;s Chunky Monkey, he couldn&#8217;t even follow a recipe. Garcia had to invent the dessert. "I had to make my own recipe," he said.

He came up with a chocolate teardrop, stuffed with berry mousse and served with candied berries and berry sauce. It was, he said, "obviously delicious," and, he said, "something I could call mine."

And when he subsequently made the teardrops for his wife, she said, "Why don&#8217;t you cook like this every day?"

"Because I cook at work," he replied.

Despite Meals, Ready to Eat, KBR and fast food stands all over Army bases, Fort Lee&#8217;s two-month Advanced Individual Training program is still turning out Army cooks, many of whom become expert chefs with experience and further training. Garcia had never cooked before he enlisted; now, he said, he considers it an art.

Last week, the USAREUR culinary team chopped, tossed and sauteed its way around a kitchen in the Keyes Building in Heidelberg to make dinner for 49 members of the German-American Club, hosted by USAREUR commander Gen. Carter Ham.

Master Sgt. Major Luckett devised the menu to reflect American cooking, he said, and was in charge, just as he headed the team that went to Fort Lee and took home several medals.

For the dinner party, the team made chicken breast stuffed with goat cheese and spinach, a white wine sauce, roasted lamb chops, green beans with crispy prosciutto and pine nuts among the main course items. There were also appetizers, salads and desserts that continued the Americana theme, including lemon bars, cream cheese brownies and mini fruit tartlets.

Luckett has been cooking in the Army for 23 years, the last 11 of them as an enlisted aide for five different generals, and responsible, depending on the amount of entertaining the general does, for two or three dinner parties each week, and a luncheon or two as well.

"I don&#8217;t have a specialty. I cook everything," he said. It also helps, he said, "being very polite and having great protocol habits."

Luckett said he&#8217;s a perfectionist who&#8217;s never satisfied &#8212; but he did recall fondly some previous dishes he thought had turned out rather well: the lobster-stuffed tenderloin with cognac sauce was nice, he said, with the roasted garlic mashed potatoes.

These dishes are rarely available in an Army dining facility. "We have to go by meats, starches and vegetables," Garcia said. "We&#8217;re cooking on a mass production basis. We can&#8217;t please only one person.&#8217;

Furthermore, the meats have usually been frozen, the potatoes may be instant &#8212; and in some DFACS downrange, the food must arrive precooked.

"But it can be good as long as you follow the guidelines," Garcia said. "I take a lot of pride in what I do."

Garcia deployed to Iraq for a year, where Army cooks usually didn&#8217;t cook. That was left to KBR contractors, with workers from Sri Lanka, Malaysia and other countries. "Our job was walking around, supervising, making sure they were doing the right thing," said Garcia. The arrangement felt "odd," Garcia said, and the hours passed slowly.

It could have been worse, though. According to a 2006 story on the Multi-National Force&#8211;Iraq Web site, "Most of the Army cooks have been tasked out to other units performing various jobs like gunners on logistics patrols or pulling force protection on different FOBs."