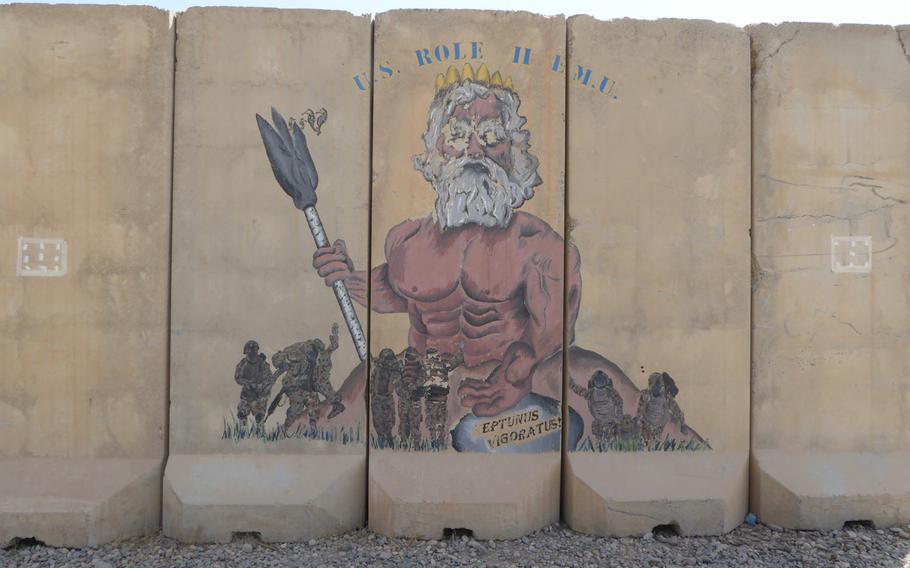 A mural painted on blast walls outside the Navy-operated Role II emergency medical unit at Qayara Airfield West is pictured here on Wednesday, Aug. 30, 2017. The painting depicts Neptune, god of the sea, reaching out to combat troops, with the phrase "Neptune healers" inscribed in Latin. (Chad Garland/Stars and Stripes)

A mural painted on blast walls outside the Navy-operated Role II emergency medical unit at Qayara Airfield West is pictured here on Wednesday, Aug. 30, 2017. The painting depicts Neptune, god of the sea, reaching out to combat troops, with the phrase "Neptune healers" inscribed in Latin. (Chad Garland/Stars and Stripes) 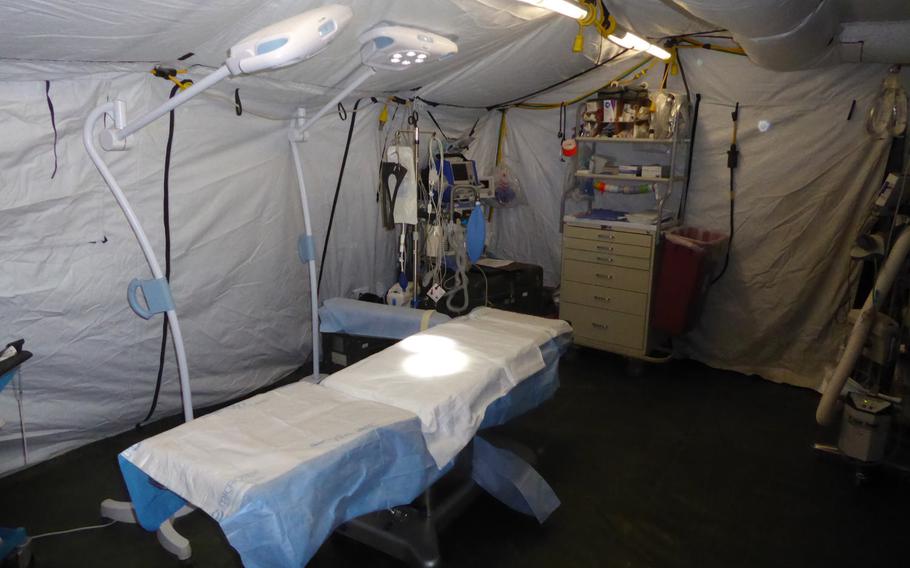 An operating table in the operating room of the Role II emergency medical unit at Qayara Airfield West is pictured here on Wednesday, Aug. 30, 2017. The field hospital is not busy, but staff stands ready to treat coalition casualties and the worst of Iraq's wounded. (Chad Garland/Stars and Stripes) 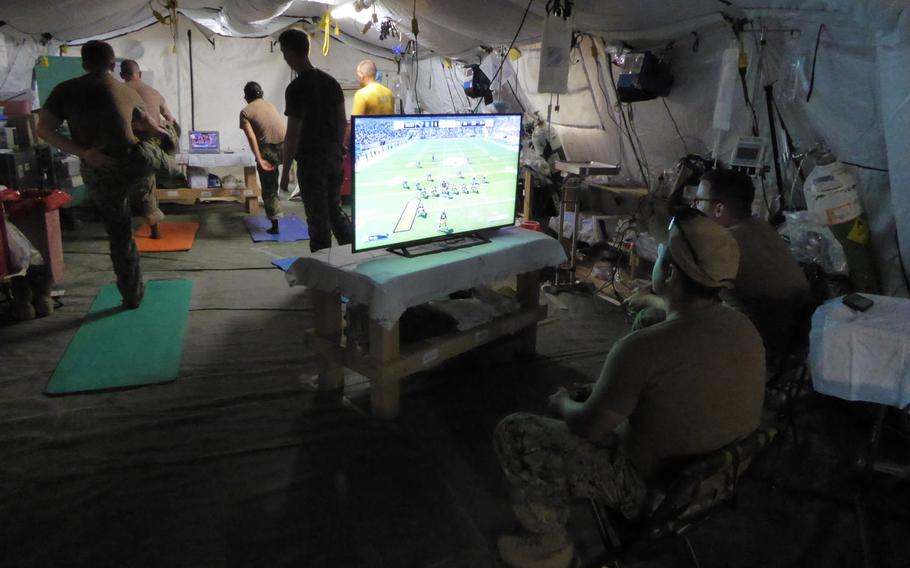 Navy corpsmen at the U.S. Role II facility at Qayara Airfield West are on around the clock and spend much of their free time inside the emergency room. Pictured here on Wednesday, Aug. 30, 2017, are corpsmen exercising along with a P90X workout video while others play video games. (Chad Garland/Stars and Stripes) 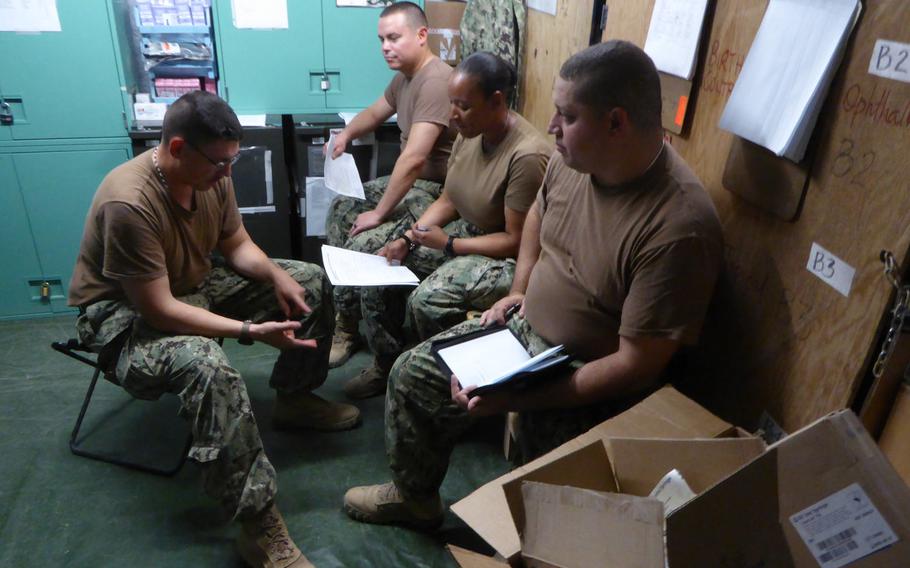 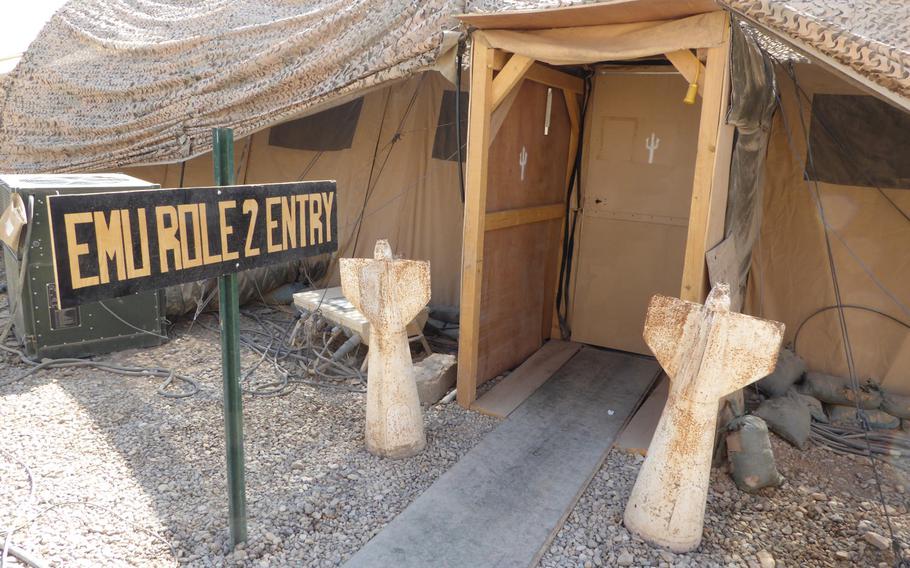 The entrance to the U.S. Role II facility at Qayara Airfield West, pictured here on Wednesday, Aug. 30, 2017, features tridents denoting that it's run by the Navy. The doors are flanked by bomb tail sections. (Chad Garland/Stars and Stripes) 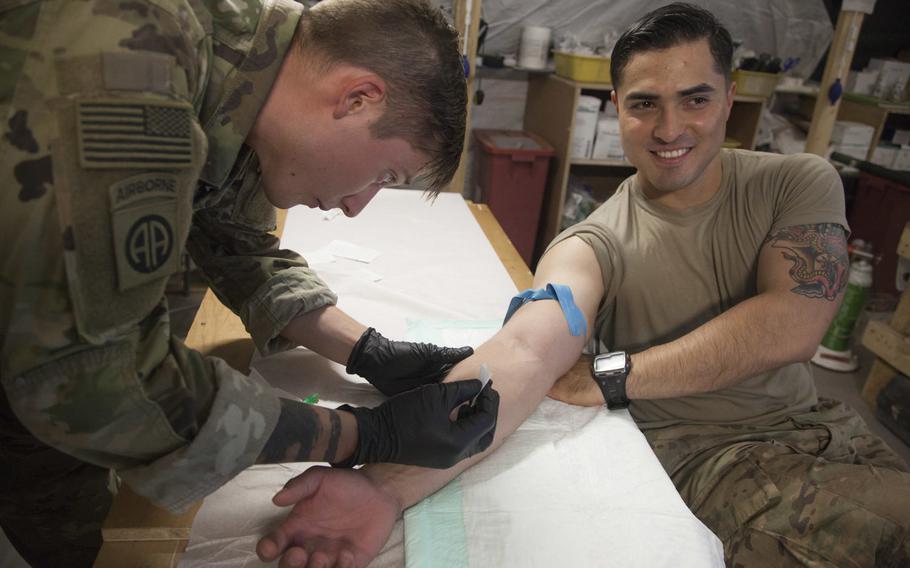 QAYARA AIRFIELD WEST, Iraq — A peculiar irony accompanies the U.S. military’s diminished presence and role in Iraq. With fewer troops, often at safe distances from the front lines, medics caring for them here are expanding their roles and skills.

“All my medics are drastically increasing their skill base,” said Army Sgt. 1st Class David Euler, the senior combat medic in the Role I clinic at this logistics hub about 40 miles south of Mosul.

That’s because the medics mainly stay in one place rather than patrolling with front-line units and generally treat soldiers with the aim of returning them to duty. In contrast, during the massive U.S. military presence that ended in 2011, the priority was stabilizing casualties for transport to better-equipped hospitals elsewhere.

Sending a soldier to a hospital in Baghdad now could sideline them for five or six weeks, partly because of the difficulty of movement, said the 28-year-old from Penton, Wash.

“We’re keeping people in the fight here,” Euler said. “We don’t move troops if we don’t have to.”

It’s a big change from Euler’s last time here in 2008 and 2009, then as a private first class with an Army infantry unit in Baghdad and the Diyala River Valley, where constant patrolling ground him down and blunted many of his skills.

Though he’d joined the Army for a guaranteed medic slot, he wasn’t only a medic. When not patching someone up, he was a rifleman.

Medics whom Euler manages now still go out on route-clearing, but they’re stationary much of the time, he said. A handful staff the battalion aid station around the clock, along with an Army physician and physical therapist.

Things were a bit slower in the Role II expeditionary medical unit tent next door, where Navy corpsmen — who like Euler were used to giving first aid to troops on the battlefield on previous deployments — find themselves doing more intensive care, if less frequent, care in the rear.

During down time, a group of on-call sailors did yoga along with a workout video while others played a video game on one of the emergency room’s big screen monitors. In the pharmacy, Senior Chief Petty Officer Josina Cato met with a small group for career development.

Besides their main focus on treating coalition casualties, they may be called on to treat the worst of Iraq’s wounded — those at risk of losing life, limb or eyesight.

“We haven’t had a lot of exposure, but what we have seen reflects an evolution of wounds,” said Capt. Brian Smoley, the hospital chief since July, when the unit made up of sailors from throughout the Navy deployed here on a six-month tour.

The wounded soldiers are sometimes stabilized right on the flight line and sent on to Iraqi medical facilities, said Petty Officer 2nd Class Adam Little. Still, the Iraqis seem to know they’re in good hands, and the corpsmen know they’re making a difference.

“Even on the darkest days ... they were so happy to see us,” said Little, 32, a Plimpton, Mass.-native on his fourth Iraq deployment since 2006 — his first working in a hospital.

It’s more of a “backseat role” than Petty Officer 1st Class Angel Vicente, 35, expected, but the looks on Iraqis’ faces tell him he’s appreciated, even if he can’t speak their language, the Springfield, Mass.-native said.

Officials said that in about a month in Iraq, the Navy unit had treated fewer than a dozen patients. The Iraqis are doing more for themselves with occasional coalition support.

“The concept of them actually handling their own medevac and leaning on us only when necessary ... is outstanding,” Little said. It’s a significant improvement from a decade ago. “Their medics are doing a phenomenal job.”

While that means fewer patients, the ones they do get need their best efforts. Smoley, the officer in charge, said the corpsmen trained up on trauma treatment before deploying — few use the skills in day-to-day jobs at military medical centers — and drill often to stay sharp. When they’ve had a chance to work, they’ve taken pride in knowing they’ve done all they possibly could.

As Euler’s team prepares to redeploy, he expects they will take the experience they’ve gained treating more than 1,000 patients since arriving in January and share it throughout the Army. Some sergeants did more medicine in this nine-month deployment than they had during their three- or four-year careers prior to it.

In garrison, their fellow soldiers normally call for ambulances, not the unit medic, in emergencies. Not so in Iraq.