For Chiarelli, Iraq mission is more than military 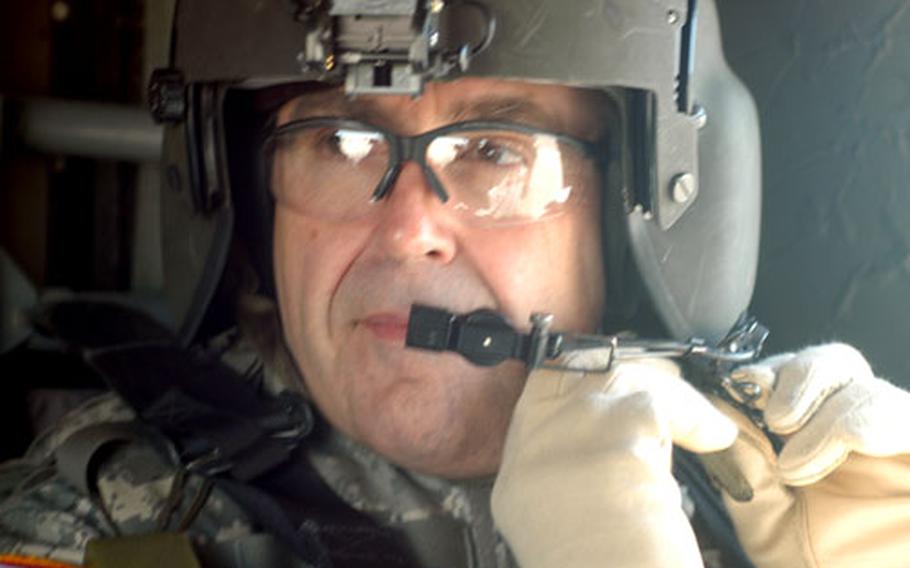 As commander of Multi-National Corps Iraq, Lt. Gen. Pete Chiarelli takes bi-weekly trips into the countryside, breaking away from endless briefings and meetings for a “firsthand look" to see what resources his troops and Iraqi partners need. (Nancy Montgomery / S&S)

Editor&#8217;s note: On Jan. 19, Lt. Gen. Pete Chiarelli returned to Iraq for a second tour and assumed command of day-to-day operations throughout the country. Last week, Stars and Stripes spent the day with Chiarelli on a mission to Diyala.

The helicopter lifted from behind the palace at Camp Victory into the blue skies above Baghdad, and Chiarelli, commander of Multi-National Corps-Iraq, looked through the open doors at what is, to some degree, his domain.

It was not, however, a beautiful thing. Chiarelli pointed out garbage-strewn streets as far as the eye could see.

It wasn&#8217;t just the aesthetics. People who live amid garbage, Chiarelli reasons &#8212; people with sewage in their yards, people without jobs &#8212; are people without hope and more likely to join the insurgency.

His mission last Sunday was to fly to Baqouba, the capital of Diyala province, a mixed Sunni-Shiite area with a sizable Kurdish population &#8212; and the site of a number of recent, disturbing incidents.

At least 73 people were killed near Baqouba between Feb. 21 &#8212; a day before the Samarra Golden Mosque bombing that made civil war seem imminent &#8212; and Feb. 26. Among the dead were two judges&#8217; bodyguards, entire Shiite families, Iraqi troops and police, and 47 men thought to be Sunnis, pulled off a bus and executed. The day before his visit, a car bomb killed a girl and injured nine people; the day after, a car bomb killed six and injured 23.

Chiarelli was to hear a briefing from the 3rd Heavy Brigade Combat Team, see how their counterinsurgency work was going, tour public works projects, and meet with provincial officials and an Iraqi army general.

A Seattle butcher&#8217;s son, Chiarelli, 55, holds two advanced degrees &#8212; in international relations and economics, and in national security and strategic studies. He&#8217;s a believer in &#8220;full spectrum operations&#8221; that emphasize winning Iraqi favor and wooing them away from insurgency by providing services and &#8220;an empathetic understanding of the impact of Western actions on a Middle East society.&#8221;

In a paper he wrote after his first tour in Iraq as commander of the 1st Cavalry Division, where his troops worked on projects just blocks away from battles with a Shiite militia, he said it was clear he could win battles with military force. But, he wrote, it was also clear that winning the campaign was only possible &#8220;if the local populace revealed insurgent and terrorist cells and, accordingly, denied sanctuary.&#8221;

Chiarelli is a serious man, who, his aides say, handwrites each condolence letter he sends to the families of soldiers killed in action. But he&#8217;s also witty and easily makes his soldiers laugh.

The trip was one of several Chiarelli takes biweekly, breaking away from endless briefings and meetings for a &#8220;firsthand look&#8221; to see what resources his troops and Iraqi partners need.

Around noon, Col. B.J. Jones, commander of the 3rd HBCT, 4th Infantry Division, at Forward Operation Base Ironhorse, began an elaborate Power Point presentation. There were charts and graphs and maps, and slides on everything from bird flu to an Iraqi news conference held after the Golden Mosque bombing.

There were lists of tribal leaders, assessments of everything from police capacity to basic services. There were discussions on unemployment &#8212; a big factor in insurgency. At one point, the colonel vowed that this year the date palms would be sprayed.

As maps of the many insurgent groups and where they were active were displayed, Chiarelli asked, &#8220;Who creates the biggest problem?&#8221;

It wasn&#8217;t Sunni nationalists or al-Qaida in Iraq. Muqtada al-Sadr, Jones replied, the politically powerful fundamentalist Shiite cleric with his own militia and a hatred of the occupation.

Asked about their frustrations, Jones&#8217; officers talked about corruption and the reluctance of Iraqi officials to use their authority. They cited their own inexperience in public works projects and the confusing array of paperwork needed to get money from a confusing variety of sources.

Chiarelli told them he was impressed.

Chiarelli and the 3rd HBCT officers visited a water treatment project. As the convoy rumbled through the squalid area, adults looked on impassively. Children waved excitedly and held their thumbs up. Col. Ken Cox, Chiarelli&#8217;s reconstruction officer, waved back enthusiastically.

The project looked like a squat, white trailer, and under Chiarelli&#8217;s questioning it was revealed that, in essence, that was all it was.

There was no one trained to operate it, no distribution system to send the water into people&#8217;s homes. So what&#8217;s the point? Chiarelli asked.

Ra&#8217;as al Tamimi, governor of Diyala province, wore a suit and an air of fatigue and anxiety. In a large office, al Tamimi told the general that his province had calm spots, hot spots and &#8220;boiling areas.&#8221;

Although there were assassinations, abductions, murders and attacks on checkpoints, Iraqi forces were becoming more capable, he said. The provincial judicial chief said most judges had come under threats. They needed more bodyguards, and more money to support the families of assassinated judges and ministers.

The Iraqi government had promised the province $100 million for reconstruction, he said, but &#8220;not one penny has been allocated to Diyala.&#8221;

The governor added sadly that neighboring countries were working to make Iraq &#8220;a failure.&#8221;

The Iraqi army&#8217;s 5th Division commander got right to the point, despite his manner of extreme politeness. The general, whose name isn&#8217;t being published to protect his family, said he needed ammunition and mortars to fire back at insurgents.

The general told Chiarelli that after the Golden Mosque was bombed, one of his worst problems was other Iraqi troops &#8212; the Public Order Battalions from the Ministry of the Interior.

&#8220;You question the professionalism of the public order battalions?&#8221; Chiarelli said.

But Chiarelli decided to focus on the positive &#8212; struck, he said later, by how the general&#8217;s words illustrated progress in the Iraqi army, if not the police.

It had long since turned dark by the time Chiarelli boarded the Black Hawk for the return trip to the palace. When he arrived, he was handed the latest report &#8212; another car bomb, more dead and wounded. He shook his head.

The key: Bring hope to the Iraqis

The first thing a public works project in Iraq should do is actually work, Lt. Gen. Pete Chiarelli told the 3rd Heavy Brigade Combat Team command last week. Water treatment plants without distribution systems, electrical substations without feeder lines and other projects no one knows how to operate are useless to the Iraqi people and consequently do nothing to ease attacks on troops, he said.

Chiarelli, a believer in diminishing the insurgency by wooing the public, said there were many projects that had been completed but left either unconnected or without locals who knew how to use them.

Second, he said, put the projects where they&#8217;ll do the most good &#8212; and good is measured in fewer attacks against U.S. troops.

&#8220;To me, you have to use it as a weapon where people are fighting,&#8221; Chiarelli said. &#8220;I never worried about the nice areas of Baghdad when I was there. If the power went down, they just went into the garage and [turned on the generator].

Third, Chiarelli said, don&#8217;t set your standards too high. This is not Dubuque, Iowa. Iraqi sewage systems, for instance, are nonexistent in most places and flow into streams and rivers in the best of circumstances.