For British troops, four-star hotel isn’t the lap of luxury 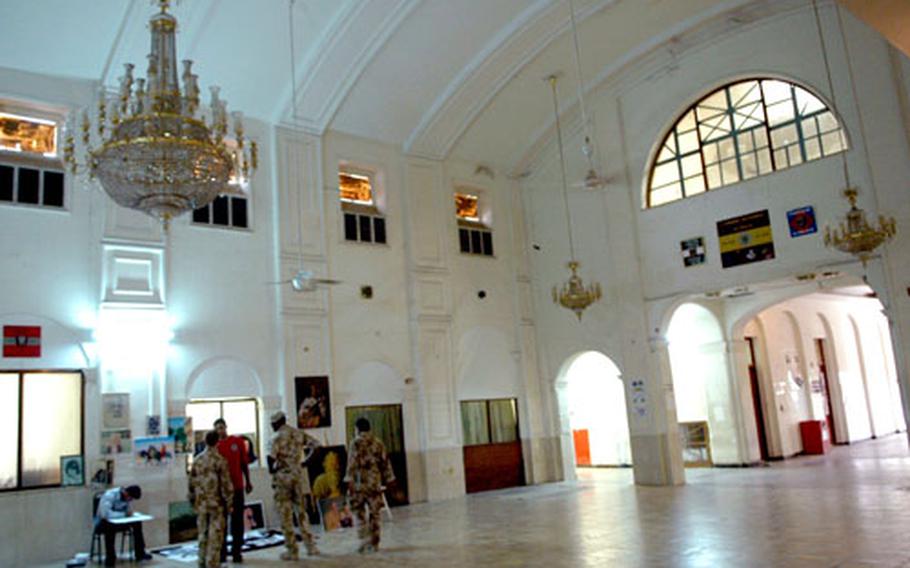 A chandelier hangs in the lobby of the Shatt Al Arab Hotel, the headquarters for British forces in Basra. (Monte Morin / S&S)

A chandelier hangs in the lobby of the Shatt Al Arab Hotel, the headquarters for British forces in Basra. (Monte Morin / S&S) 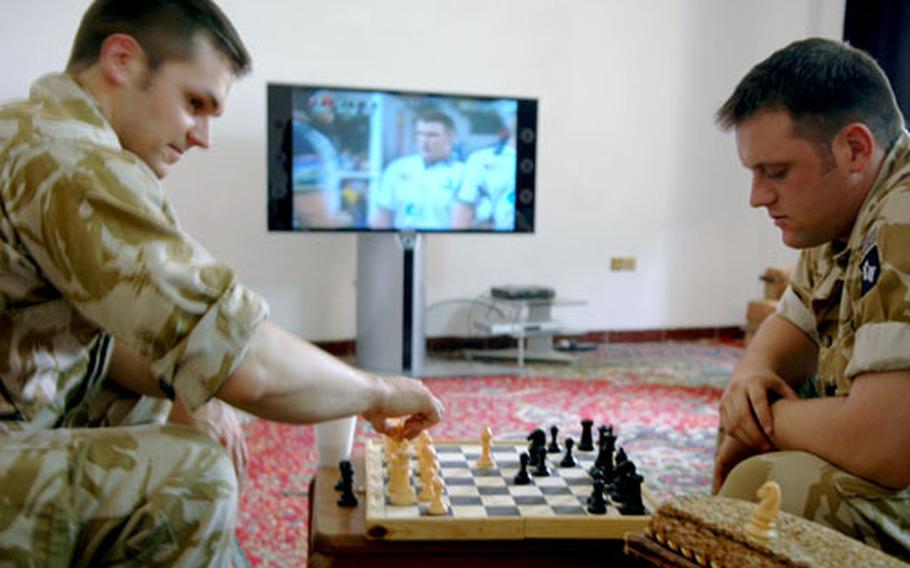 Two officers play chess as a rugby match plays on television in a lounge at the hotel. (Monte Morin / S&S) BASRA, Iraq &#8212; It&#8217;s been decades since the Shatt Al Arab Hotel was considered a riverside playground for Gulf Region pleasure-seekers, and just as long since its high-rolling clientele were greeted at the front steps by a tiled inscription reading &#8220;WELCOME.&#8221;

In those days, when the southern Iraq city of Basra was still known as &#8220;The Venice of the East,&#8221; jet-setting guests would land at an airstrip on the hotel&#8217;s grounds, check in, and take a river ferry to a now-gutted casino that stood on a narrow, nearby island in the Shatt Al Arab waterway.

Today, however, the sun-bleached and rocket-pocked hotel is simply called &#8220;The Shatt&#8221; by British forces who have converted the sprawling resort into a headquarters for troops based in Basra.

The only flights that touch down on the hotel grounds nowadays are hulking Lynx and Merlin helicopters, while the only boats that tie up on the river behind the hotel are Mark II Combat Support Boats that blast along the choppy surf like powerboats.

While the hotel&#8217;s chandeliered entryways and high-ceilinged corridors hint at the hospitality guests once experienced here, soldiers from the First Light Infantry Battle Group say they have been made to feel increasingly unwelcome in this sprawling, trash-strewn city of 1.5 million.

With the downing of a British troop helicopter last week and the deaths of two British soldiers in a roadside bomb attack Saturday, commanders from the Germany-based 1st Battalion, The Light Infantry and the The Queen&#8217;s Royal Hussars are struggling to reform a local police force that has been divided and weakened by local Shiite militias. The two British units fall under the command of the 20th Armoured Brigade.

Undue influence from the militias has led to a deterioration in the city&#8217;s security, and the department&#8217;s reform is the key to restoring order in Basra, commanders say.

British troops also have borne the brunt of frustrations from local residents who complain that they lack adequate electricity to power the multitude of satellite TVs, air conditioners and other gadgets that were purchased en masse after the fall of Saddam Hussein.

Recent acts of violence against British forces were a result of these tensions, some officers said.

A hotel seems like an unlikely place to command a counter-insurgency in the city, but soldiers say they appreciate the accommodations.

Garrett&#8217;s accommodations were far more rustic the last time she served in Iraq two years ago. That time, she lived at the top of a sports stadium in Amarah, where her room was missing two walls.

To be sure, the state of the hotel has deteriorated from those days when it was rated with four stars. Only a shallow puddle of scummy water remains in its pool, and water and electrical problems sometimes leave soldiers without showers or power.

Indirect fire attacks are also a worry. One evening last week, a rocket attack sent a chunk of shrapnel through the door of a trailer unit beside the hotel. The shrapnel whizzed by the feet of a dozing American contractor, missing him by inches.

Still, the metal sliced open a pillow, punched through the wall of his trailer, entered a second trailer unit, blasted through a porcelain toilet bowl, exited the trailer, ripped through a pile of sandbags and buried itself several feet into the earth.

The contractor, who asked not to be identified because the company he works for does not permit interviews, said it took him a few minutes before he knew what had happened.