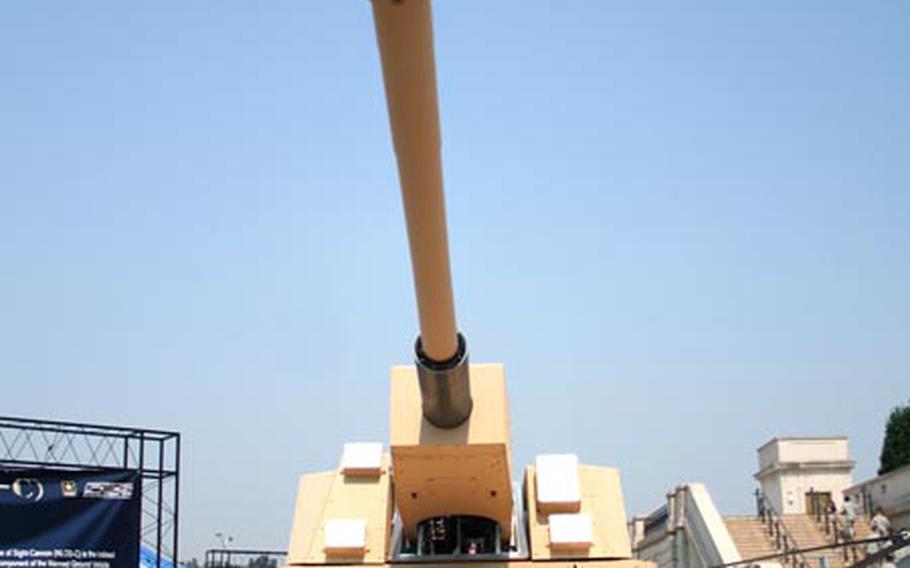 The Army unveiled the prototype of its XM1203 Non-Line-of-Sight Cannon, or NLOS-C, Friday at the Pentagon. (Lisa Burgess / S&S)

The Army unveiled the prototype of its XM1203 Non-Line-of-Sight Cannon, or NLOS-C, Friday at the Pentagon. (Lisa Burgess / S&S) 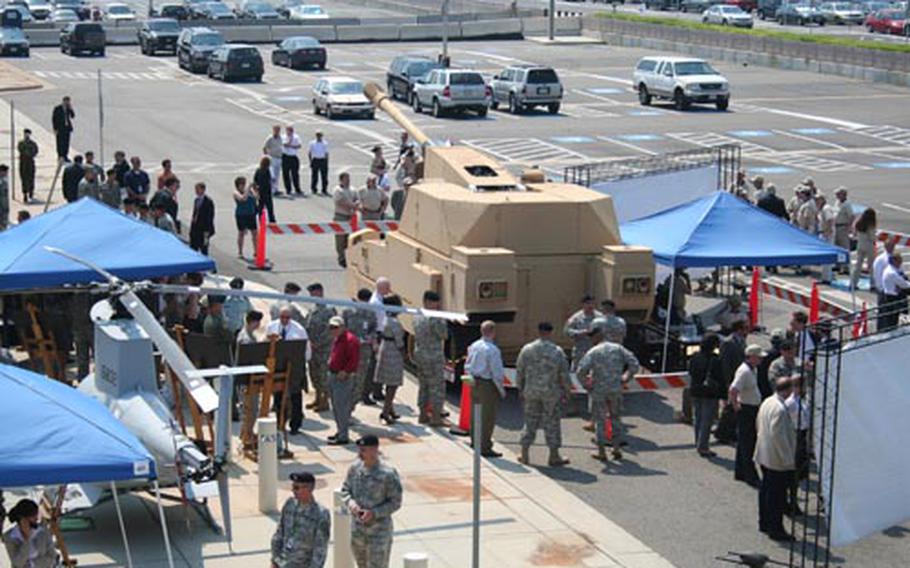 The artillery piece is the indirect fire component of the Army’s Manned Ground Vehicle family, which are in turn one of the elements of the Army’s Future Combat System. (Lisa Burgess / S&S)

ARLINGTON, Va. &#8212; The military community got its first peek at the Army&#8217;s newest self-propelled howitzer Friday when a prototype of the cannon made its debut at the Pentagon in celebration of the service&#8217;s 233rd birthday.

The ground vehicles include eight specialized variants, ranging from the NLOS-C to infantry and medical vehicles, built around a common chassis and power train.

The cannon is still in the development stage, according to Army Sgt. 1st Class Jesse Henne, a member of the Maintenance and Logistics team on the NLOS Cannon project.

The first test version of the NLOS-C is supposed to be sent to Fort Bliss, Texas, in 2012, with full production scheduled to begin in 2015, Henne said.

Meanwhile, the cannon&#8217;s prototype was trucked to the Pentagon on Friday aboard a flat bed truck from its development site in Minneapolis, its hulking tan body and 155 mm gun hidden under wraps from curious drivers.

Unlike the Army&#8217;s existing M109A6 Paladin 155 mm howitzer system, which has an eight-soldier crew (driver, commander and six gunners), the NLOS-C has only two crewmembers: a driver and a vehicle commander, Henne said.

The NLOS-C will also be the first Army vehicle to have a single-band, all-rubber track instead of a metal track with rubber pads, Henne said.

The solid-rubber track "is lighter, quieter and gives you a softer ride," Henne said.

Other improvements include an active armor system integrated into the skin of the vehicle "so that if it&#8217;s shot with a [rocket-propelled grenade], as fast as you can blink, it will activate it" before the round can penetrate the hull, Henne said.

The Army sent Henne, a vehicle maintenance supervisor with 18 years of Army experience, to work on the NLOS-C as a follow-on assignment in 2006 after his second Iraq deployment with the 101st Airborne Division.

As the program&#8217;s mechanic, Henne said his job is to "give feedback from the user standpoint &#8212; to tell them what is and isn&#8217;t realistic to expect guys to do, maintenance-wise, when they are actually in the field."

That&#8217;s particularly important, Henne said, "because when this is fielded, the soldiers are going to do 80 percent of the maintenance."

Since the crew is artillerymen, they don&#8217;t have any special maintenance training, he said.

Normally, vehicle crewmen are expected to perform tasks such as checking fluids, tightening bolts, and changing tracks &#8212; the heavy armored vehicle equivalent of the sort of day-to-day maintenance you might do on your car, Henne said.

But on the NLOS-C, the crew will be expected to do jobs usually reserved for mechanics, Henne said.

For example, if the cannon&#8217;s breech motor &#8212; the key to its auto-loading artillery rounds, instead of using a third crewman for the job &#8212; breaks down, the two-man crew will have to replace it, Henne said.

The cannon will be equipped with a full set of self-testing computers that will make the job as easy as possible, Henne said.

"This tells soldiers what&#8217;s wrong, and how to fix it," Henne said, patting the huge, tan flanks of the prototype cannon.