For Army historians, the Iraq war can't be documented from a safe distance 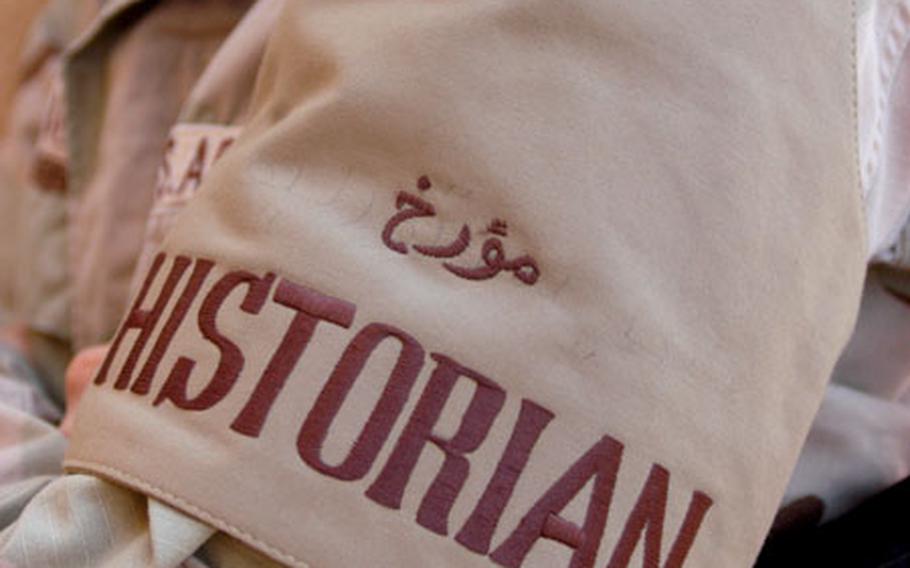 While historians were mobilized during World War I, the effort to document wars and battlefield conditions became part of Army doctrine during World War II. Today, there are three such teams operating in Iraq, each numbering only two or three people. Members of the unit wear this armband. (Kevin Dougherty / S&S)

While historians were mobilized during World War I, the effort to document wars and battlefield conditions became part of Army doctrine during World War II. Today, there are three such teams operating in Iraq, each numbering only two or three people. Members of the unit wear this armband. (Kevin Dougherty / S&S) 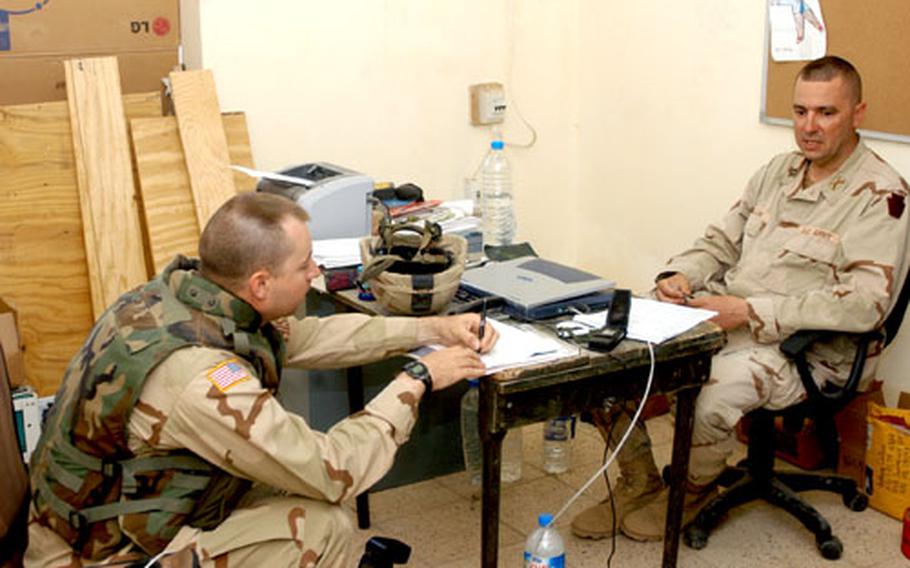 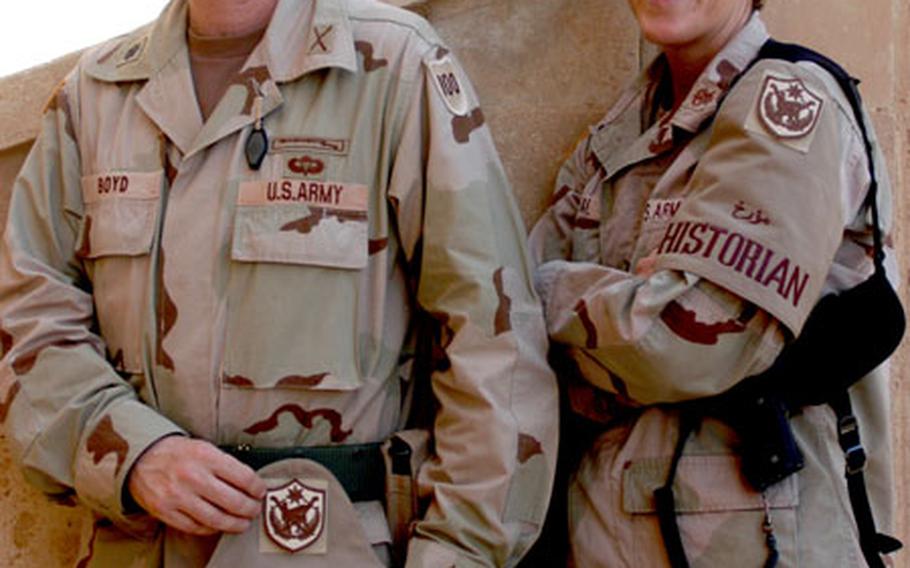 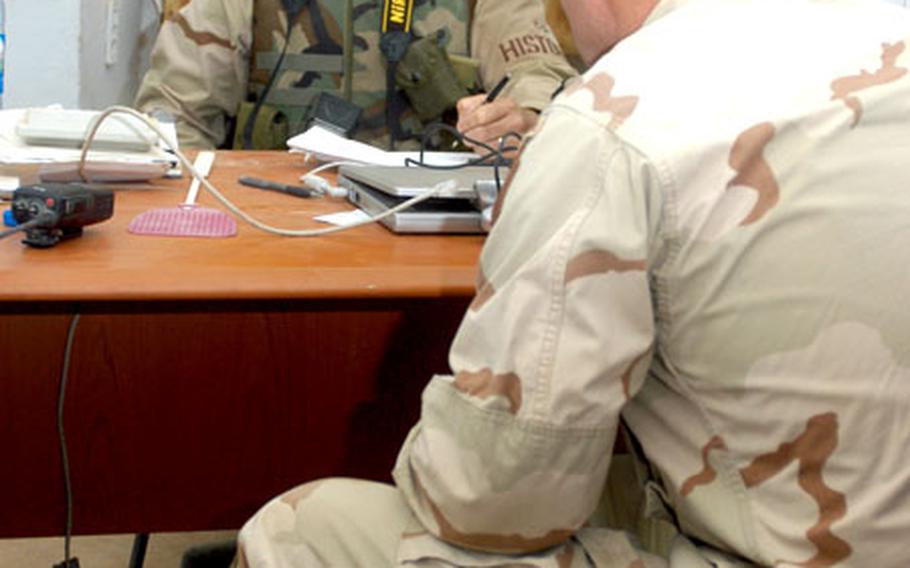 TIKRIT, Iraq &#8212; The company commander settles into his chair, looking a tad anxious as the interviewer on the opposite side of the desk leans forward to activate his tape recorder.

After they exchange pleasantries, Scott Fisk gets down to business: What do you do? What are the challenges? How has the situation changed?

The questions persist, but Fisk, when he&#8217;s finished with this interview, isn&#8217;t heading back to a newsroom to bang out an article for publication. He came to Beiji, Iraq, to gather information for the Army for posterity&#8217;s sake.

Assigned to the 45th Military History Detachment, Fisk is one of seven Army historians documenting the war in Iraq. The seven travel the country capturing whatever information and insights they can from the soldiers who make up Operation Iraqi Freedom III.

Another team operates in Afghanistan.

The effort to roll up the yarns of war dates back to 1864, when Congress commissioned a history of the Civil War, said Lt. Col. John Boyd, the command historian in Iraq.

Nothing on that scale had ever been attempted before.

One major drawback was that the effort began after hostilities ceased, meaning valuable details were forever lost as memories faded.

When the United States entered World War I, the Army decided to mobilize a team of historians and place them near the front, Boyd said. However, due to delays, the team didn&#8217;t get to the fight until very late.

What helped save the day for future historians were the handwritten letters by the doughboys of World War I. The trench warfare frontlines were more or less stationary, so mail came and went on a fairly regular basis.

Army historians finally got to put their stamp on things in World War II.

A separate historical branch was created under the general staff section. That gave Army historians the support and access they craved, allowing them to capture events as they were unfolding.

It also put them in harm&#8217;s way. At least seven Army historians died on the battlefield in World War II, Boyd said.

Since then, Army historians have roamed between front-line and rear-echelon units in every major conflict to capture &#8220;the good, the bad and the ugly,&#8221; as Boyd put it.

Today, there are 25 soldier-historians in the Army, though only one is regular active-duty. Based on existing Army doctrine, Boyd said, the number of U.S. forces in Iraq would necessitate 30 historians.

Four of the seven historians recently spent more than a week in and around Tikrit interviewing the soldiers of the 42nd Infantry Division. The trip held added significance because this is the first time since the Korean War that a National Guard unit has commanded a division headquarters in a war zone.

While some on the team remained in Tikrit, Fisk, for example, traveled to a forward operating base for battalion and company level perspectives.

Army historians glean information from a variety of resources, such as Web sites, electronic data, photos, artifacts, interviews and documents.

With so much data and so few people to round it all up, Army historians encourage units to gather what they can and pass it on to them before they leave the theater. Fisk said some have been documenting their work all along, while others have a ways to go.

To ease soldiers&#8217; concerns about turning over documents, or just speaking up, Fisk, who holds a secret clearance, tells them anything of a &#8220;classified&#8221; nature will remain so for at least a decade. And taped interviews won&#8217;t be transcribed for a few years, due to a backlog.

But despite all their efforts, some soldiers, including a few in authority, view the work with indifference, or even disdain, Neal and Boyd said. The Army, Neal added, has been so effective at discouraging people from talking to the media that some troops won&#8217;t sing even for the historians.

Neal shakes her head in frustration. Boyd does, too. Valuable information perishes sooner than people realize.