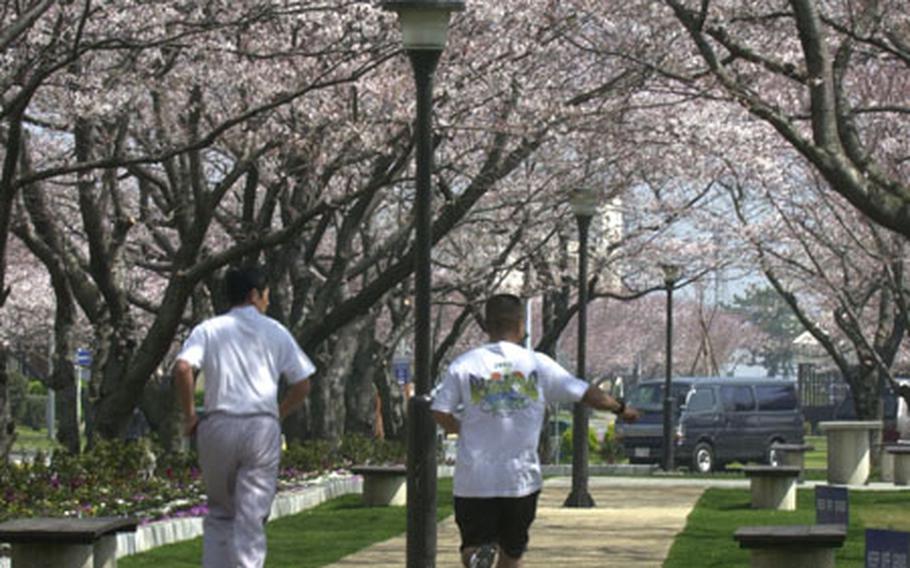 A couple of joggers enjoy the afternoon running through a park laden with cherry blossoms on Yokosuka Naval Base. (Jim Schulz / S&S) A couple of Japanese women enjoy a lunch break in a park on Yokosuka Naval Base. (Jim Schulz / S&S)

The medicines are his main defense against seasonal allergies triggered every spring for Haynes, the public affairs chief at Misawa Air Base in north Honshu.

&#8220;I get it every year when the winds start blowing and things start growing. It began hitting me last week,&#8221; he said.

Haynes has been a longtime sufferer of seasonal allergies: During a tour of duty at Yokota Air Base in western Tokyo, Haynes said pollen from cedar was a big problem for him there.

&#8220;The number of patients grew dramatically from the 1970s to the 1980s,&#8221; said Minoru Okuda, Japan Allergy Foundation president and professor emeritus at Nippon Medical School in Tokyo. &#8220;I believe the number is rising gradually.&#8221;

Seasonal airborne pollens are already peaking in some parts of the country.

Sneezing and runny noses afflicting many people living in Japan can be traced to an abundance of pollen released by cedar trees, one of the most prevalent trees growing here.

This year, Okuda said, appears to be an average year.

&#8220;Pollenosis [hay fever] is caused by plant pollen, such as Japanese cedar trees and ragweed,&#8221; said Dr. Isao Tsutsumi of the Tokyo Medical and Surgical Clinic.

&#8220;When foreign substances enter the human body, it reacts by trying to fight it. It usually enters through the nose or eyes and not so much through mouth,&#8221; he said.

According to Tsutsumi, this year is said to have slightly more pollen than an average year. However, hard data has yet to be collected.

Although the allergens &#8212; the substances that cause allergic reactions &#8212; are a different mix from those on the mainland, people on Okinawa are not free from problems, according to a Kadena Air Base doctor.

&#8220;We have many people come to the clinic with allergies from dust, pollen or mold,&#8221; said Dr. Dana Cressler, family physician at Kadena&#8217;s Family Practice Clinic.

Allergy tests are available at the clinic to determine the primary cause of the problem. Identifying the allergens helps doctors recommend appropriate medicine and patients avoid being exposed to the substances, he said.

If allergies are caused by pollen, they are usually seasonal, he said.

Grasses such as timothy grass, rice grass, orchard grass, ryegrass, foxtail and fescue are the main culpits of allergies during June in Japan, he said.

The best prevention is to stay inside, said the doctor.

Cressler said genetic traits play an important role in determining who is susceptible to allergies.

&#8220;See your family history, and if your mother or father is allergic, or if someone in your family has asthma or eczema, it would increase the risk of allergy,&#8221; he said.

Unlike mainland Japan, Okinawa is immune from the problems caused from cedar tree pollen.

&#8220;There are no cedar trees on Okinawa that bother people like in the mainland,&#8221; said Dr. Akira Yagi of the Yagi ENT Clinic in Naha.

&#8220;Pollen is easily blown away into the ocean because Okinawa is a narrow, long strip of island and therefore breezy and at times very windy,&#8221; he said.

There are different ways of treating hay fever, says Dr. Isao Tsutsumi of the Tokyo Medical and Surgical Clinic.

Antihistamines can ease allergy symptoms. Non-drowsy formulas are available by prescription, but a wide variety also are available over the counter.

Another course of treatment is to inject pollen allergen into the body to get the body used to pollen.

Tsutsumi said this approach requires periodic injections and needs to be continued for three to four years to realize benefits. He said only about 50 percent of patients find relief using this approach.

Another method is to prevent pollen from entering the body by wearing glasses or special surgical masks available at drug stores.

Rinsing out the nose after coming from outside also helps.

Courses of prescribed medicine should begin at least one week prior to the allergy season because it takes about two to three weeks for the effects to kick in.