For Air Force couple, an exercise in togetherness 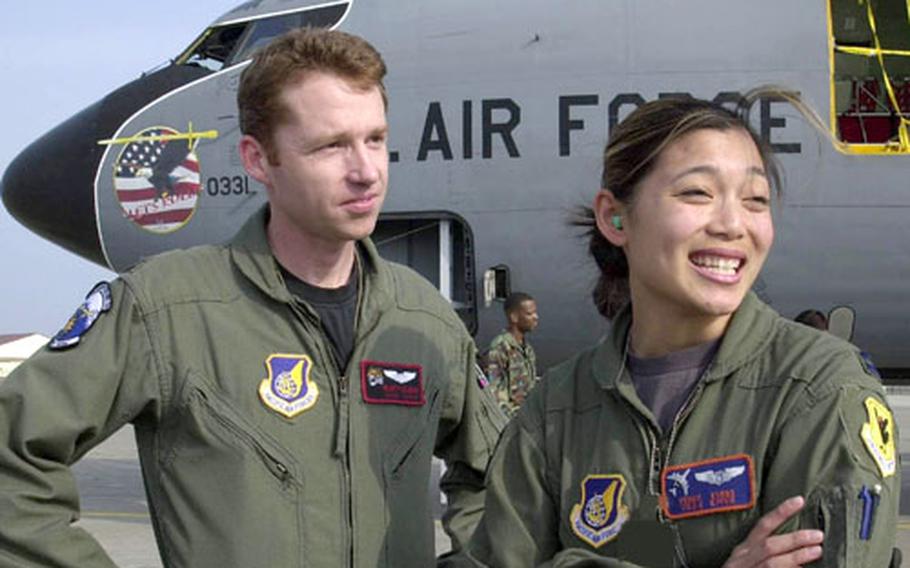 Capts. Rusty and Fenny Evers chat next to Rusty’s KC-135R tanker after he completed a six-hour air refueling mission during Cope North exercises at Misawa Air Base, Japan Tuesday. They are based together at Okinawa’s Kadena Air Base. (Wayne Specht / S&S)

Capt. Rusty Evers, a KC-135R tanker pilot with the 909th Air Refueling Squadron at Okinawa&#8217;s Kadena Air Base, said he first met his wife, Fenny, while both were stationed at Grand Forks Air Force Base in North Dakota.

&#8220;She was waiting for a training slot, and I was flying tankers for the 911th Air Refueling Squadron there, but forward-deployed a lot,&#8221; Evers said.

Fenny Evers, also a captain, is a senior weapons controller director flying aboard an E-3B Airborne Warning and Control System aircraft that happens to be based with Kadena&#8217;s 961st AWACS Squadron.

It wasn&#8217;t until the couple met again at Nevada&#8217;s Nellis Air Force Base where they both were on temporary assignment during Red Flag air combat exercises did they become serious about each other.

They married six months ago.

Managing to convince the Air Force to assign them to the same base was a challenge, but because both tankers and AWACS are stationed at Kadena, the task was a bit easier.

Temporary duty commitments keep the couple apart, and Rusty Evers said he had to work hard to get them together for the Cope North exercise here.

&#8220;We begged, borrowed and bribed to be here since both of our airplanes would be at Misawa for the exercise; it was a perfect opportunity for us,&#8221; he said.

&#8220;We feel very fortunate to be at Kadena where both of our airplanes are together,&#8221; said Rusty Evers.

What the future holds for the Everses is not entirely certain.

Fenny Evers said AWACS are only assigned on Okinawa, and at bases in Oklahoma and Europe. Tanker aircraft flown by her husband may not always be assigned at those bases.

That doesn&#8217;t seem to faze Fenny Evers, at least not at this point in their careers.

Rusty Evers said he has another reason for trying to be together on temporary duty assignments.