For Afghans, Obama's SOTU message on US troops was loud and clear 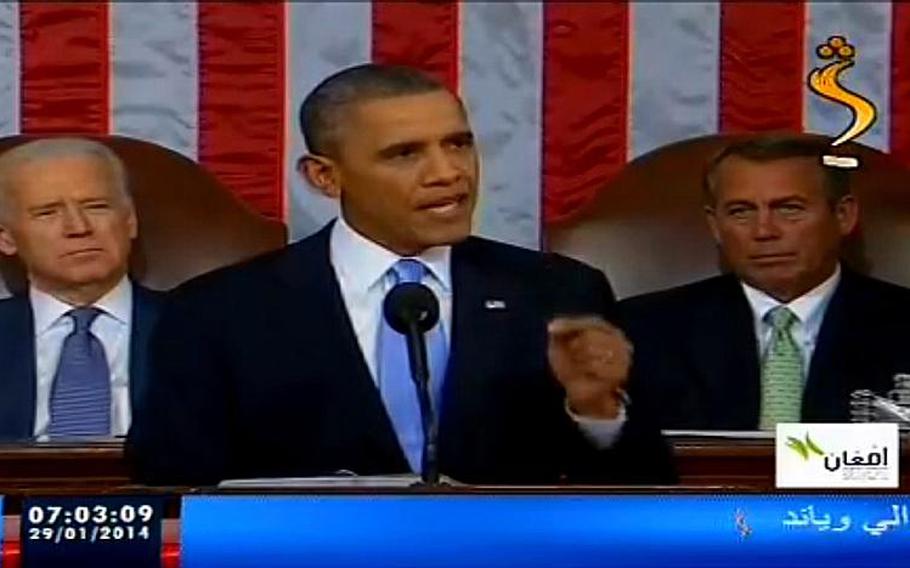 A screen grab taken from a broadcast by the Afghanistan television station Shamshad shows President Barack Obama giving his State of the Union speech. Many Afghan TV stations aired the speech in full. ()

As Washington and Kabul tussle over an agreement that would allow American troops to stay in Afghanistan past the end of 2014, President Barack Obama said little about the war’s fate in his State of the Union address and announced no new policies or plans.

He made scant reference to Afghanistan, mentioning it only briefly toward the end of an hourlong speech.

“With Afghan forces now in the lead for their own security, our troops have moved to a support role,” Obama said. “Together with our allies, we will complete our mission there by the end of this year, and America’s longest war will finally be over.”

Though he noted that “a small force of Americans could remain in Afghanistan with NATO allies to carry out two narrow missions: training and assisting Afghan forces, and counterterrorism operations to pursue any remnants of al Qaida.”

Whether American and allied troops stay into next year depends on the signing of a bilateral security agreement that was painstakingly negotiated. Afghan President Hamid Karzai has refused to sign the agreement, even at the urging of a council of elders he convened last November who represented a cross-section of Afghan society.

“After 2014, we will support a unified Afghanistan as it takes responsibility for its own future,” Obama said, but U.S. forces could remain “if the Afghan government signs” the security agreement.

Thomas Ruttig, co-director of the Afghanistan Analysts Network, said Obama did not indicate what the consequences might be if Karzai does not sign the agreement.

“For me, the most important word in that text on that issue is that there’s a big ‘If,’ ” Ruttig said, referring to a transcript of the speech.

Ruttig said patience with Karzai in the U.S. Congress is clearly wearing thin — as evidenced by a recent vote slashing humanitarian and military aid to Afghanistan — and the American public is tired of American servicemembers dying there.

But Afghans are still at war, he added, and many paid close attention to Obama’s speech, which many Afghan TV stations aired in full with translations in the local languages.

The lack of news in the address, which ran live early Wednesday morning Afghanistan time, made for little buzz in the streets of Kabul, but for those who watched, the president’s messages about the long-term security agreement and the departure of American troops came across loud and clear.

For Sultan Mohammed, who owns a real estate business in the Afghan capital, and his employee, Amanullah Ismati, the unsigned bilateral security agreement is key to ensuring that foreign aid keeps flowing to Afghanistan.

“Afghanistan is in a crucial situation where we are trying to recover from war,” Mohammed said. “But we cannot develop, we cannot improve without the help of the United States.”

He said he believed Obama’s pledge that the United States will “support a unified Afghanistan as it takes responsibility for its own future.”

“Afghanistan is still in a strategic position, and the big countries recognize this,” Mohammed said. “I believe that the U.S. and NATO will not ignore Afghanistan again like they did in the 1990s.”

“Over the last 10 years, the United States has poured a lot of money into Afghanistan,” he said. “A lot was stolen, but a lot went to improving our lives. We now have better roads, education and things like phones.”

Other Afghans who watched Obama’s address were less enthusiastic about the future of U.S.-Afghan relations. Mohammed Azim, a shopkeeper in Kabul, said the uncertainty over the BSA is hurting business, but that it should only be signed if it is in Afghanistan’s interests.

That’s only fair, he argued, because American aid is likely only to continue as long as it fits the United States’ interests. “As soon as they have finished their agenda, they will stop helping.”