For advise-and-assist brigade, the battle moves to the conference room Buy Photo
Soldiers with the 5th Iraqi Army Division in Diyala watch as one of their own shows how to use a metal detector to scan for hidden bombs and caches. The display was for the benefit of U.S. soldiers as well to judge the equipment and proficiency among the Iraqi soldiers before gearing up for long-term training sessions over the next few months. (Teri Weaver/Stars and Stripes)

Buy Photo
Soldiers with the 5th Iraqi Army Division in Diyala watch as one of their own shows how to use a metal detector to scan for hidden bombs and caches. The display was for the benefit of U.S. soldiers as well to judge the equipment and proficiency among the Iraqi soldiers before gearing up for long-term training sessions over the next few months. (Teri Weaver/Stars and Stripes) 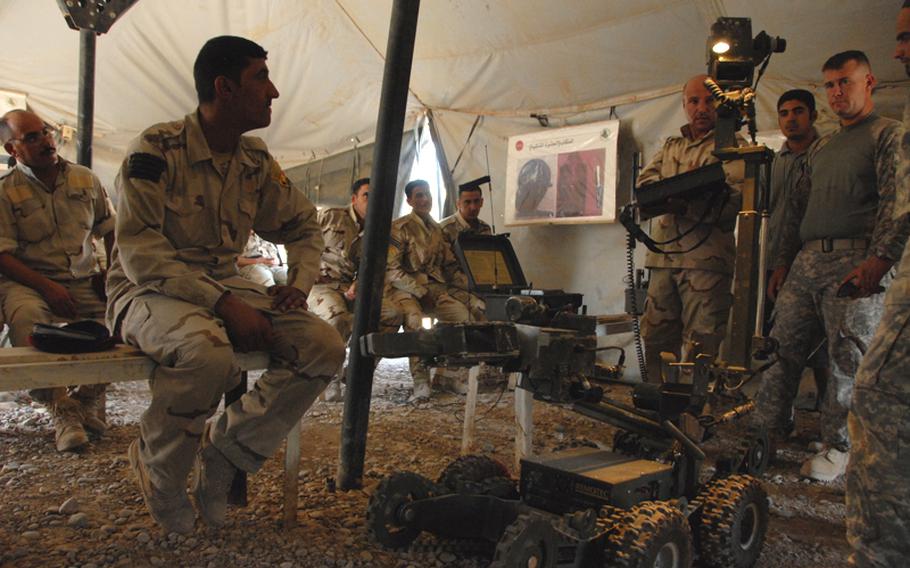 Buy Photo
An Iraqi soldier shows off his skills with a robot used to examine possible explosives from a remote location. ?You can tell they have learned a lot more since I was here last time,? said Staff Sgt. Matthew Hutzenbiler, 29, of Belfield, N.D., who spent his first tour in Iraq in Taji during the 2007-2008 surge. (Teri Weaver/Stars and Stripes) Buy Photo
When it comes to working with their counterparts, U.S. soldiers have adapted to Iraqi habits over the years. One of the biggest lessons is inserting breaks, usually 10 to 15 minutes each hour or so, to give soldiers a chance to smoke and to keep their attention during the lessons. (Teri Weaver/Stars and Stripes) 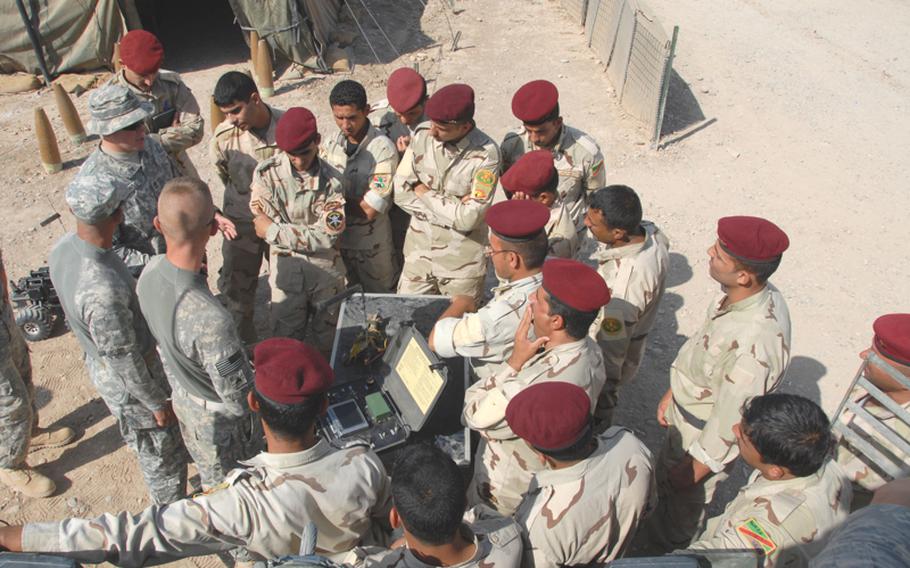 Buy Photo
U.S. soldiers with the 66th Engineer Company, part of the support battalion, go over a mock bomb inspection before letting the Iraqi soldiers practice. Some of the training is done on Iraqi bases, as here. Later this year, the Iraqi soldiers will train at nearby Forward Operating Base Warhorse, a U.S.-controlled base where the Iraqis will eat, sleep and work with the American troops. (Teri Weaver/Stars and Stripes)

Despite having agreed to the planning-session topics for long-term training of Iraqi soldiers &mdash; medical practices, clearing houses, communications and vehicle maintenance &mdash; Col. Nehad al Kazraji and his staff had new ideas for nearly every topic, outlined in Arabic on computer screens throughout the room.

They wanted schooling on vehicle and personal searches, securing base entrances, and working with fiber optics. The Iraqi medical officer wanted to know how to remove a bullet and patch up a soldier.

Before coming to Iraq, they practiced looking for danger and tracking down the enemy. But as an advise-and-assist brigade, the 2-25 also rehearsed conference room maneuvers, U.S. officers said. They learned to sort through &mdash; and fend off &mdash; requests from Iraqi military leaders.

&ldquo;It was very much about learning to not commit to anything before you assess,&rdquo; said Lt. Col. Scott Murray, commander of the 225th Brigade Support Battalion, part of the Stryker brigade.

So the U.S. side took notes. Lessons on search techniques were possible, and a class on fiber optics would add a week to the training. But the medical officer&rsquo;s request gave them pause. They said they&rsquo;d get back to him.

Walking the line between helping and letting Iraqis do for themselves is delicate. Iraqi officers can quickly become offended when it seems the U.S. officers aren&rsquo;t adhering to Iraqi plans.

Nehad also was irritated, because he thought that some bomb-detection and vehicle mechanic training was already under way at one of his nearby units. He didn&rsquo;t know another Iraqi brigade commander had approved the sessions.

The U.S. side &mdash; infantry and support officers from the brigade combat team &mdash; told Nehad that the actual training hadn&rsquo;t started yet. First, they wanted to figure out what the Iraqi soldiers knew, what equipment they used and what exact help they needed as the brigade plots out the next few months of training.

Out in the field

But there was real-world training at hand. Soldiers from the 66th Engineer Company were spending three days working with the Iraqis on immediate needs.

They watched as an Iraqi soldier operated an Andros, a four-wheeled, remotely controlled robot used to inspect possible bombs. They also looked at the Iraqis&rsquo; new metal detectors while the soldiers swept a field on the base, marking the perimeters of simulated caches.

&ldquo;You can tell they&rsquo;ve learned a lot more since I was here last time,&rdquo; said Staff Sgt. Matthew Hutzenbiler, 29, of Belfield, N.D., who spent his first tour in Iraq in Taji during the 2007-2008 surge.

In the three months since deploying from Hawaii, the brigade has had to help out the Iraqis with fuel supplies only once because of a supply contract gap, Murray said.

&ldquo;There was a time I was filling fuel trucks three or four times a day,&rdquo; the logistics officer said of a past deployment in Mosul. &ldquo;But not anymore.&rdquo;

Still, frustrations persist. At the previous night&rsquo;s meeting, Nehad said he couldn&rsquo;t house and feed the soldiers who would arrive from other units in the coming months for the five- to 10-day courses.

Maj. John Tulifua, the 225th&rsquo;s operations officer, deflected the request, saying he was unsure if housing on the U.S. base was available. What he really needed was Murray&rsquo;s approval before even suggesting it might be possible.

Murray said the housing is available, and that the U.S. unit previously in Diyala housed Iraqi soldiers for nearly two weeks at a time during training. The U.S. troops escorted them to classes and meals, and watched them at night. Murray plans to extend the invitation again.

As the evaluation session ended, another request came up, this time from the Iraqi soldiers. They wanted the U.S. soldiers to provide bullets so the two sides could compete in marksmanship.

First Lt. Drew Beard, 35, of Pittsburgh, put off the idea &mdash; partly because the range was in a less secure location, and partly because he wasn&rsquo;t going to give the Iraqis any bullets.

The Iraqi soldiers didn&rsquo;t want to deal with the bureaucracy of their own supply chain, even to get bullets to go to the range.

&ldquo;It&rsquo;s always amazing&rdquo; Murray said, &ldquo;if you don&rsquo;t provide them [with equipment] how they can eventually come up with it.&rdquo;