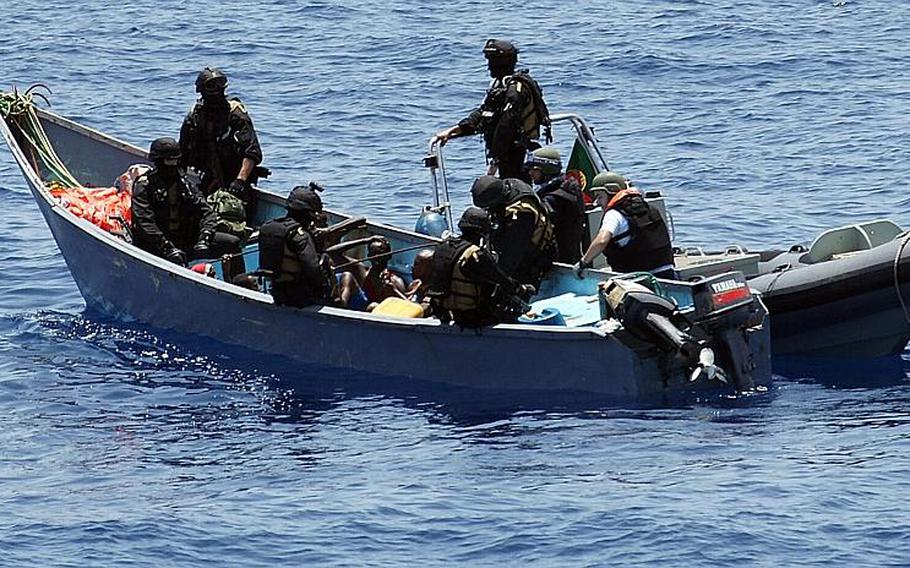 A boarding party from the Italian helicopter carrier San Giusto, which served as the flagship of the EU counter-piracy force off the Horn of Africa, captures a skiff with seven suspected pirates in October, 2011 (EU Naval Force - Somalia) 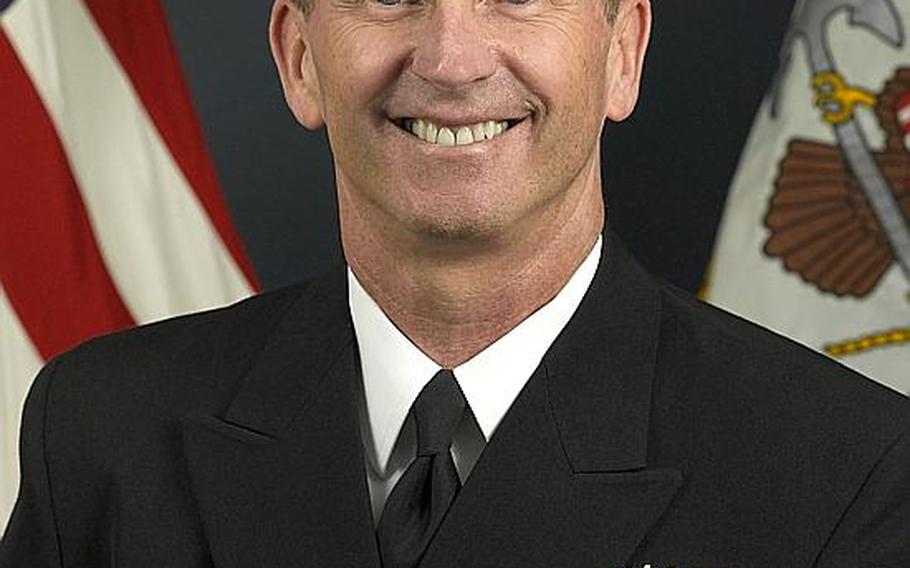 NAPLES, Italy — When pirates hijacked an American supply ship and kidnapped two of its crew members off the coast of Nigeria last October, the news had a familiar ring to it. “Captain Phillips,” a movie based on the 2009 hijacking of the Maersk Alabama, had just hit theaters, a reminder of another time when pirates posed an outsize threat off the coast of Africa.

It’s tempting to see a new Somalia in the Gulf of Guinea, a troubled body of water on the Atlantic side of Africa. A report this week by the International Maritime Bureau counted 48 pirate incidents in the area last year; a total of 36 people were kidnapped for ransom, and one person was killed.

Meanwhile, pirate attacks off Somalia continued their steep decline, dropping to 15 incidents last year after hitting a peak of 237 attacks in 2011, a fall attributed largely to an international naval policing effort and new protocols for vessels transiting the area.

Yet the U.S. Navy has little interest in a similar policing effort in West Africa, its top officer told Stars and Stripes in a November interview. Chief of Naval Operations Adm. Jonathan W. Greenert said solutions in the region must be shore-based — in other words, with local governments in the lead rather than international navies.

“You need a presence of governance that has deterred the piracy up till now in the Gulf of Guinea,” Greenert said during a visit to Bahrain.

His comments parallel what data and experts say about the region, where attacks resemble those in the Horn of Africa but are complicated by the presence of weak local governments and a lack of incentive for outside countries to intervene.

A different kind of pirate

Maritime crime has long been a problem in the gulf waters stretching from Ivory Coast to Gabon, and Nigeria in particular, whose oil exports drive much of the region’s traffic, said Dirk Steffen, maritime security director at Risk Intelligence, a consulting firm for the shipping industry. Incidents ranged from thefts of opportunity on berthed ships to armed robberies of fishing trawlers and other small craft.

A more sophisticated kind of attack emerged in 2010, when violent, heavily armed gunmen in speedboats began intercepting tankers and other cargo ships transiting the gulf.

“It was just, let’s say, a qualitative change,” Steffen said.

The upsurge in piracy may be connected to a specifically Nigerian problem: the theft of large quantities of crude oil from pipelines in the Niger Delta. Oil-theft networks siphon an average of 100,000 barrels of oil a day from the country’s poorly guarded infrastructure on land, according to a study by British think-tank Chatham House.

Pirate operations in the Gulf of Guinea tend to be crudely run in comparison to the sophisticated oil-theft networks, yet connections between the two groups exist, the study said.

Steffen links the rise of tanker piracy to developments in the Niger Delta, the oil-rich but economically impoverished tip of southern Nigeria. Militants there fought for years for political power and a share of the delta’s wealth before many laid down their weapons in 2009 as part of a government amnesty, a shift that actually caused a decline in pirate attacks.

When some former militants were given jobs protecting the local oil infrastructure they once targeted, the oil-theft networks began to look for opportunities elsewhere, he said. Tanker ships had little protection.

The attacks suggest a knowledge of the ships and their contents, as well as their intended ports and routes, other experts note, indicating a level of collusion with port authorities. Former rebels may also be among the pirates, some suggest.

“It seems to be the case that these are basically paramilitary groups,” said Cristina Barrios, a senior analyst with the European Union Institute of Strategic Studies. “And we don’t know all the connections that well, because we don’t have all the intelligence from Nigeria, and we think Nigeria may not even have it.”

As the success rate of tanker hijackings has fallen somewhat in recent years — a change some attribute to joint Nigeria-Benin maritime patrols initiated in 2012 — kidnapping for ransom has surged. The Americans taken hostage from the supply ship C-Retriever in October were released weeks later after the payment of an unspecified ransom, according to news reports.

As media began covering pirate attacks in the gulf, many reports drew parallels to the Horn of Africa. Where, some wondered, was the U.S. Navy?

Retired Navy Rear Adm. Terence McKnight, the former commander of the international task force that patrolled the Horn of Africa beginning in 2009, says much of the solution in West Africa lies in policing the waters.

“The problem we have down there is there are no navies in the Gulf of Guinea,” he said. “I think if you have a show of presence … they would take warning.”

In Somalia, a near absence of government gave international militaries a free hand in targeting pirates. With the support of Somalia’s Western-backed transitional government, a 2008 U.N. resolution opened up the country’s territorial waters and its shore to pursuit of pirates.

Attacks in the Gulf of Guinea, by comparison, occur near the territorial waters of multiple countries. Most attacks are relatively close to that boundary — 12 nautical miles from a coastline — whereas attacks off the Horn of Africa extended hundreds of nautical miles from the shore.

Although the countries of the Gulf of Guinea are more developed than Somalia, few can monitor their own waters with radar, much less police them. Sailors are often untrained in anti-piracy measures and either lack protocols for sharing information with neighboring countries or are unwilling to do so.

Weak judiciaries and police forces pose additional problems. In Nigeria, where most of the attacks originate, corrupt military and government officials are tied to the very oil theft, piracy and black market sales they are tasked with stopping.

And yet there is arguably less at stake for the international community in the Gulf of Guinea than there was in the Gulf of Aden, a major international waterway linking Europe and East Asia via the Mediterranean Sea to the Indian Ocean. The IMB counted 111 attacks attributed to Somali pirates in 2008, the year of the U.N. resolution.

Nigerian oil is more important to the European Union, where imports nearly doubled between 2010 and 2012, than to the U.S., where imports have fallen in recent years in favor of domestic crude. But with tighter military budgets, the U.S. and European countries may be less inclined to act unless the global consequences of Gulf of Guinea piracy grow in scale.

Observers like Steffen believe that regardless of the presence of a policing agreement, lasting solutions will come only with concerted efforts within Gulf of Guinea countries, especially Nigeria.

“This isn’t a question of sending more warships,” he said. “This is a question of how in the short term to develop more methods of law and order, governance, those sorts of things, to strengthen Western Africa countries — to strengthen what laws they have and make more use of the naval forces they have.”

In recent years, the U.S. and EU have worked toward strengthening navies and judiciaries around the Gulf of Guinea region.

The Navy conducts annual exercises with the region’s navies. It has also funded a coastal surveillance system that combines radar and a system that allows vessels to project their position and route.

In addition, the U.S. has shared SeaVision, a web-based application developed by the U.S. Department of Transportation that gives a common picture of sea traffic. Navies can track ships and message one another about suspicious vessels.

The EU, meanwhile, began a $6.12 million project last fall to encourage seven countries along the gulf to coordinate on legal mechanisms and information-sharing, as well as mapping. While some leaders in the Gulf of Guinea have asked for international policing to stymie piracy, help from abroad seems focused on shore for now. Experts say the immediate future in the Gulf of Guinea will likely be dictated by events within Nigeria, which faces an economic downturn and a coming election.

Whatever happens, piracy in the Gulf of Guinea is likely to continue in some form, as it has in traditional shipping lanes off the Horn of Africa, in Indonesia and in East Asia.

“As long as ships go to sea, you’re going to have pirates,” McKnight said.

Stars and Stripes’ reporter Hendrick Simoes contributed to this report.