For 2 Marine musicians, time in Iraq just keeps dragging on 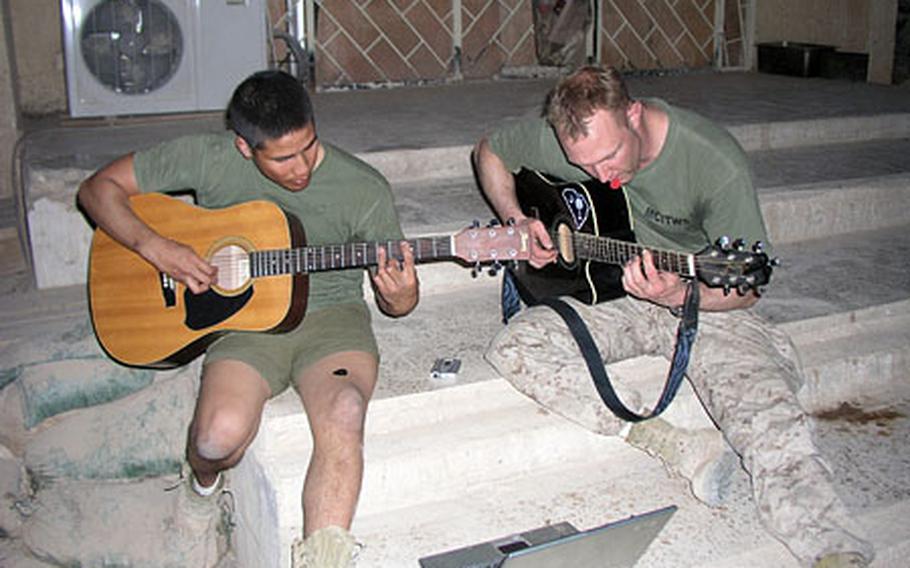 PATROL BASE YANKEE 1, Iraq &#8212; It was a calm evening after chow in Rawah, Iraq, and in the waning daylight a few Marines were lounging outdoors on benches listening to the guitar players on the patrol base steps.

&#8220;I see a red door and I want it painted black. No colors anymore, I want them to turn black,&#8221; sang the older of the two, an outgoing, jovial staff sergeant with a mild Southern accent.

&#8220;It&#8217;s a quick change,&#8221; he told the clear-eyed, quiet-spoken younger Marine of Cambodian ancestry who tried to follow the Rolling Stones tune on his guitar.

Both were playing it now, and soon, the older one had another song he wanted the younger to hear.

Then the older player, Staff Sgt. Duncan Hurst Jr., 30, of Rock Hill, S.C., tried the next lines, which were in a higher key. June Carter Cash&#8217;s part was a bit too high and his voice cracked.

Standing off by himself, enjoying the guitarists, Lance Cpl. Andrew Vanbuskirk, 20, found his mind drifting to a simpler time just a few short years ago in Hayward, Calif., and to high school days and friends and the band he played with then.

Hurst by now was playing another Johnny Cash classic, one that met with the deep silence of instant approval from the nearby Marines.

It was dark now, and after each had shown the other a few songs, Hurst went inside. Hurst&#8217;s playing is familiar to the Marines but this was the first time he and Sou had gotten together.

Sou talked of something much on the mind of the Marines here.