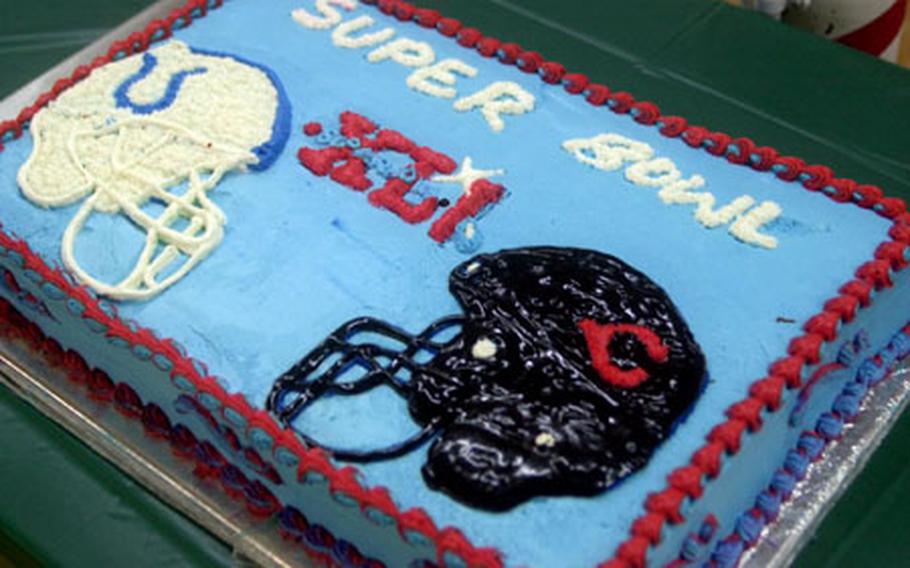 A cake is displayed at an early morning Super Bowl viewing party at the Camp Ripper chow hall at Al Asad Air Base in Iraq. Dozens of troops enjoyed cake, ate chicken wings and watched the game, which aired at 2:30 a.m. Monday. (By Steve Mraz / S&S)

A cake is displayed at an early morning Super Bowl viewing party at the Camp Ripper chow hall at Al Asad Air Base in Iraq. Dozens of troops enjoyed cake, ate chicken wings and watched the game, which aired at 2:30 a.m. Monday. (By Steve Mraz / S&S) For U.S. troops around Iraq, Super Bowl Sunday actually began Monday when the big game kicked off at 2:30 a.m.

The early-morning start didn&#8217;t prevent dozens of soldiers and Marines from watching the game at the Camp Ripper chow hall on Al Asad Air Base in western Iraq&#8217;s Anbar province.

An Army unit making its way back to Germany from Hit, Iraq, watched the game in the Camp Ripper chow hall after its flight landed at the base just prior to kickoff.

In between plays, Spc. Andrew Kline, 30, of Cary, Ill., did his best impression of the &#8220;Saturday Night Live&#8221; skit in which comedians played beer-guzzling, sausage-loving, heart-attack-suffering Bears fans who were overly optimistic about their team&#8217;s abilities.

While no beer or Polish sausage was on hand, Kline and friends relished the opportunity to see &#8220;da Bears&#8221; play in the Super Bowl.

At Camp Speicher in Tikrit, north of Baghdad, Sgt. Montoya Fleming, of the 209th Aviation Support Battalion, said he would be happy to see either team hoist the championship trophy.

&#8220;To be honest, I don&#8217;t care who wins. We have two African-American coaches in the game, and one of them is going to make history today,&#8221; said the 28-year-old native of Clemson, S.C. As an African-American, Fleming said, he was proud to witness the accomplishment.

Soldiers picked at a buffet of Buffalo wings, chicken strips and cheese sticks as the dining facility was turned into Sports Bar, USA. Workers tossed T-shirts into the grasping hands of soldiers during breaks in game action.

First Sgt. Andrew Griffith, 35, of the Virgin Islands, said he appreciated the reminder of life back at home and the opportunity to unwind with friends. &#8220;I&#8217;m just having a good time,&#8221; he said.

Griffith was at the heart of a playful controversy among his fellow soldiers of the 556th Personnel Services Battalion. Griffith, who was passionately pulling for the Colts to win, had been a fan of the team only since the playoffs, according to Sgt. Collin Burrington, 23, of Pottstown, Pa.

Some U.S. soldiers didn&#8217;t just watch the Super Bowl broadcast, they were part of it.

The inaugural &#8220;Baghdad Bowl&#8221; featured two 15-man teams from the 2nd Brigade Combat Team, 1st Cavalry Division, battling it out Saturday in a flag-football contest sponsored and taped by the CBS television network.

Highlights were played on the Super Bowl pre-game show.

The game was the brainchild of CBS analyst and former NFL great Randy Cross, who came up with the idea on a goodwill tour of Afghanistan last year.

After the game, Cross gave the team captains game balls signed by the CBS crew, including Dan Marino, Boomer Esiason and Shannon Sharpe.