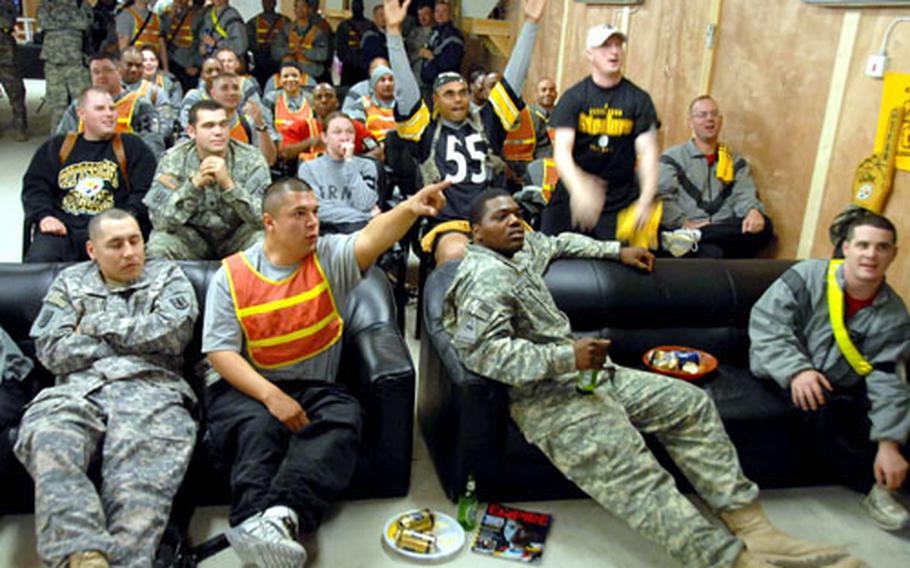 Pittsburgh Steelers fans cheer during the opening quarter of the Super Bowl at about 2:30 a.m. Monday at Forward Operating Base Delta in Kut, Iraq. (Ashley Rowland / S&S)

Pittsburgh Steelers fans cheer during the opening quarter of the Super Bowl at about 2:30 a.m. Monday at Forward Operating Base Delta in Kut, Iraq. (Ashley Rowland / S&S) 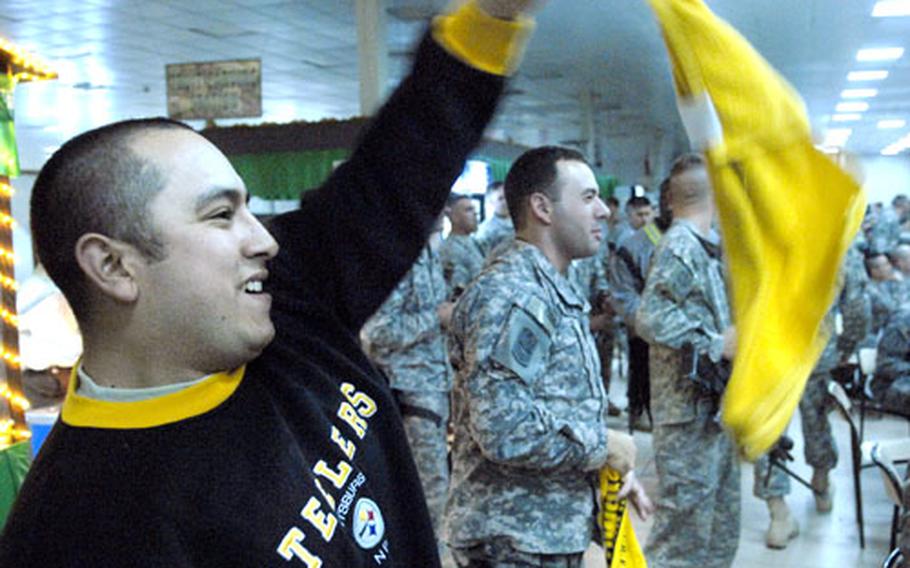 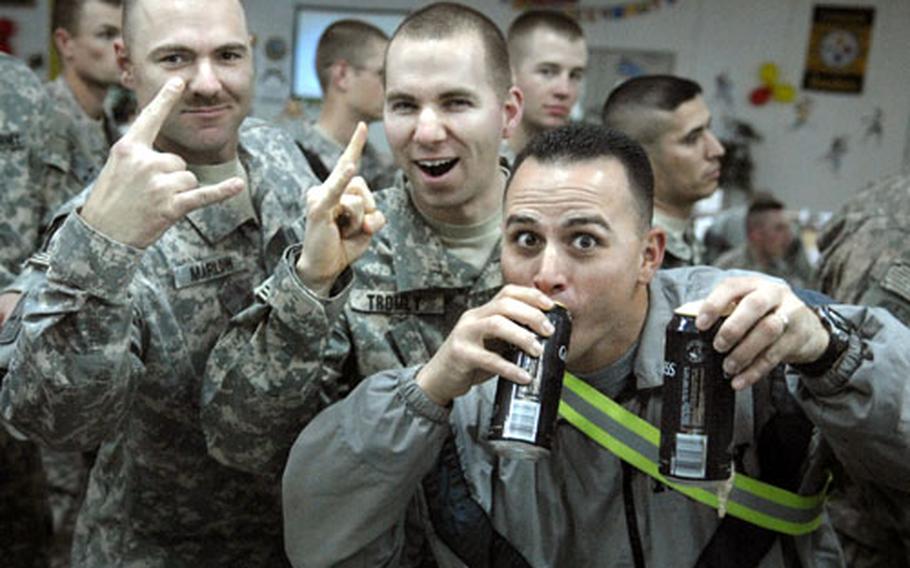 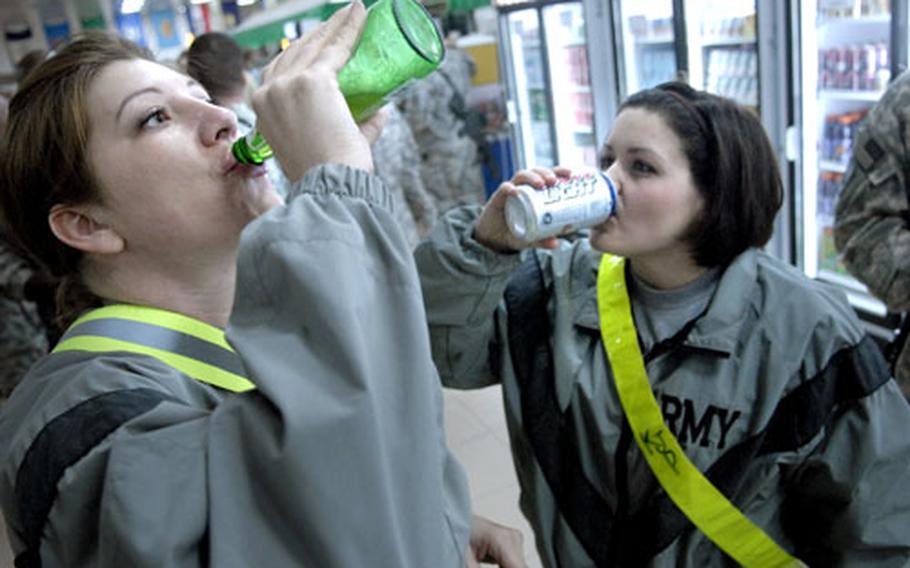 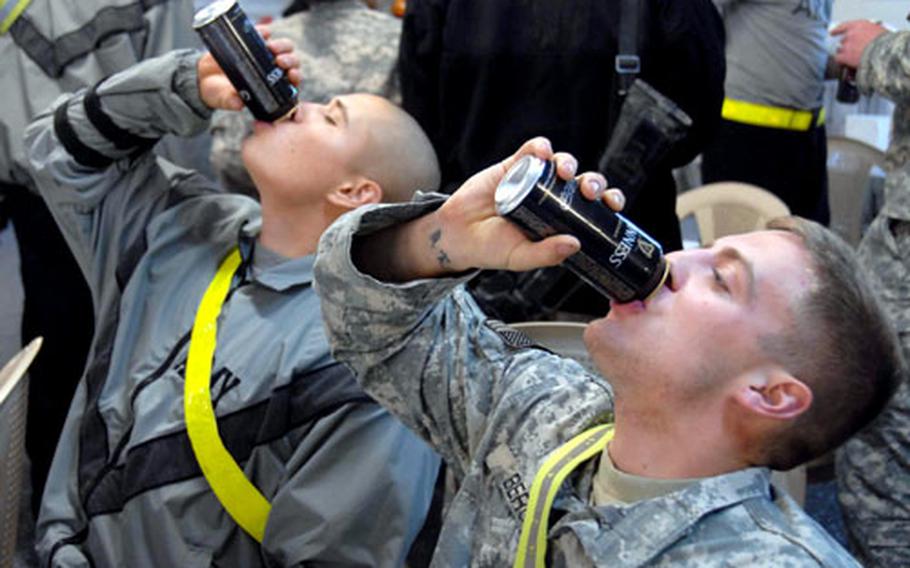 This was one Super Bowl party where the game took a back seat to something with even greater allure &#8212; free beer in Iraq.

Drawn by the promise of two free beers each, several hundred soldiers &#8212; maybe even more than 1,000 &#8212; flocked to the dining facility on Forward Operating Base Kalsu in Iskandariyah, south of Baghdad, in the wee morning hours Monday. Shortly after 1 a.m., the military men and women toasted each other with Heineken, Budweiser, Miller, Guinness and Coors.

Even though it was more than an hour before kickoff, the massive DFAC was abuzz (no pun intended) with positive energy. The soldiers laughed. They joked. They posed for pictures. They had fun.

Not every unit in Iraq was allowed to drink beer. Originally, only Multi-National Division-Baghdad had received permission to allow its servicemembers two beers while watching the game. But then Gen. Ray Odierno, top commander in Iraq, waived the ban, covered in General Order No. 1, to include all units in Iraq.

Beer was nixed at FOB Warhorse in Baqouba. Despite the late hour and lack of beer, about 200 soldiers showed up to watch the big game at the dining hall. It was a raucous atmosphere with competing chants by a solid contingent of both Pittsburgh Steelers and Arizona Cardinals partisans. The Steelers won 27-23.

In between bites of fried snacks, Sgt. John Burroughs, with the 202nd Military Police Company, said he was disappointed by the decision to ban beer. He wrinkled his nose in disgust when asked if he would be drinking the non-alcoholic variety offered.

Some people, though, said drinking beer could adversely affect readiness. And others were indifferent.

Back at Kalsu, some savored each sip of brew, cherishing the rare treat. More than a few guarded their cans and bottles, watching for any lurkers trying to steal precious sips. Others starved themselves Sunday and chugged their beers to receive the greatest effect from the frosty beverages.

First Lt. Robin Wharton of Mount Vernon, Ohio, chose Guinness because it had the highest alcohol content of the beers available, she said.

Some units applied a systematic approach to the beer distribution. They checked each soldier&#8217;s name on a roster, handed them an opened beer of their choice and inked their hand with a black marker. To get their second beer, soldiers had to return their first empty beer, and then their hand was marked again. Other units simply handed soldiers two beers at the same time. Enough beer was available to ensure that every soldier on the FOB who wanted two beers could get them.

For most troops at Forward Operating Base Delta in Kut, southeast of Baghdad, the night was less about getting a buzz than the novelty of a drinking a beer.

First Sgt. Ed Peterson, responsible for the soldiers of the 772nd Military Police Company who chose to drink, said drinking in a combat zone had its positives and negatives.

At FOB Delta, soldiers had to sign when they received their two allotted beers, which were already opened so nobody would take them outside their designated drinking area. Some people were searched when they left.

Troops on duty during the live broadcast of the game were allowed to drink during a replay of the Super Bowl on Monday evening.

Many applauded the two-beer limit, saying it was enough to enjoy but not make anybody drunk. Some, like Spc. Aaron Berg, planned to down them quickly in hopes of getting a buzz.