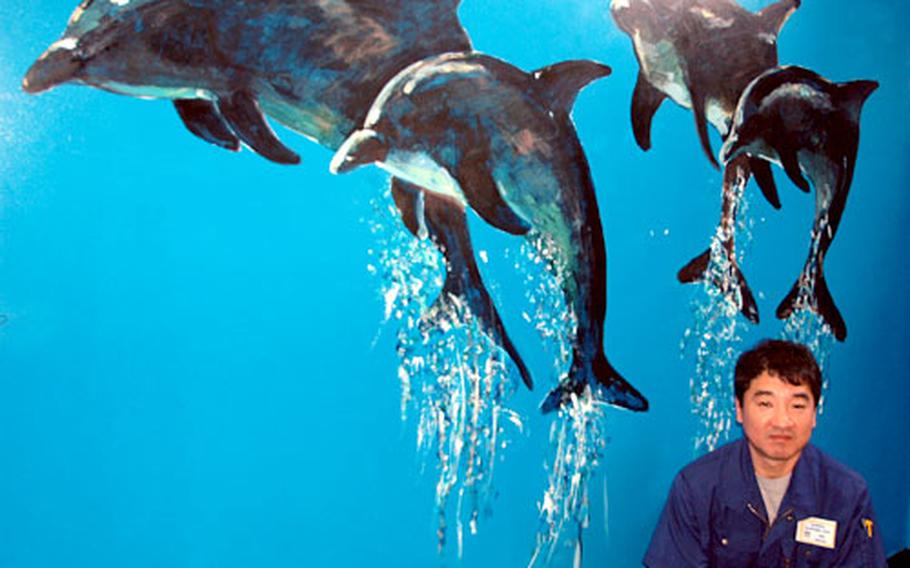 Dolphins frolic in the stairwell and along the flights of stairs at Sasebo Naval Base&#39;s Jack N. Darby Elementary School. The oil murals were painted by school handyman Toshiya Ikeda, posing here with some of his work. (Greg Tyler / S&S)

Dolphins frolic in the stairwell and along the flights of stairs at Sasebo Naval Base&#39;s Jack N. Darby Elementary School. The oil murals were painted by school handyman Toshiya Ikeda, posing here with some of his work. (Greg Tyler / S&S) 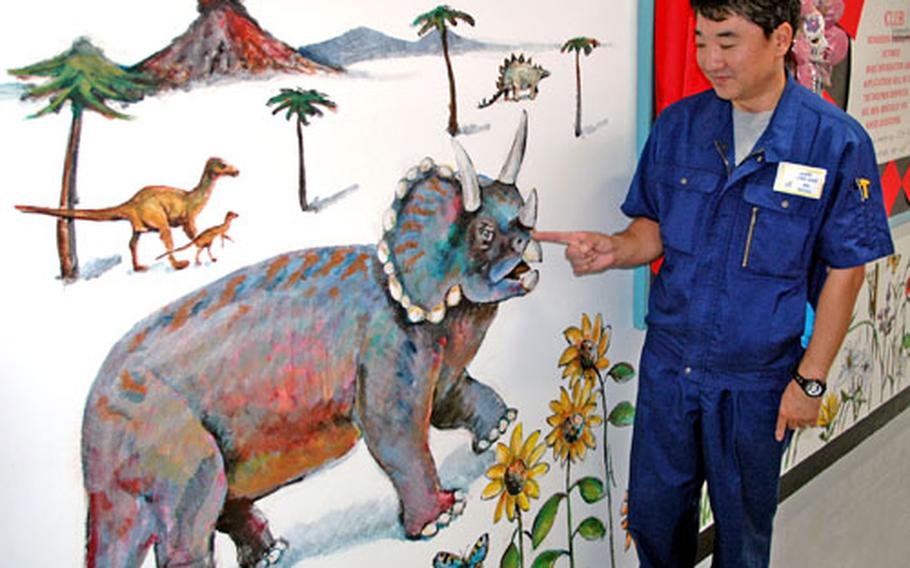 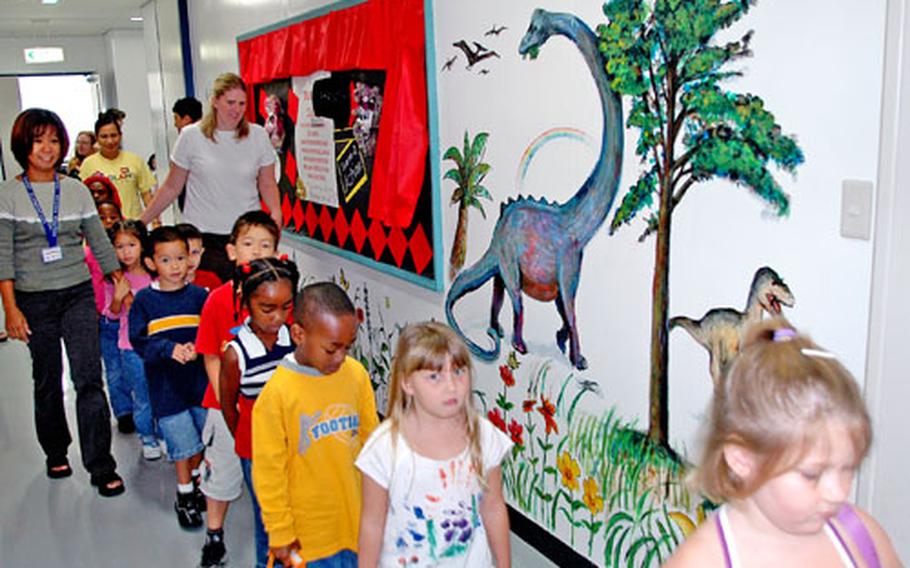 Students head toward the cafeteria on Thursday, walking past a mural of dinosaurs in a hallway between the cafeteria and classrooms. (Greg Tyler / S&S) 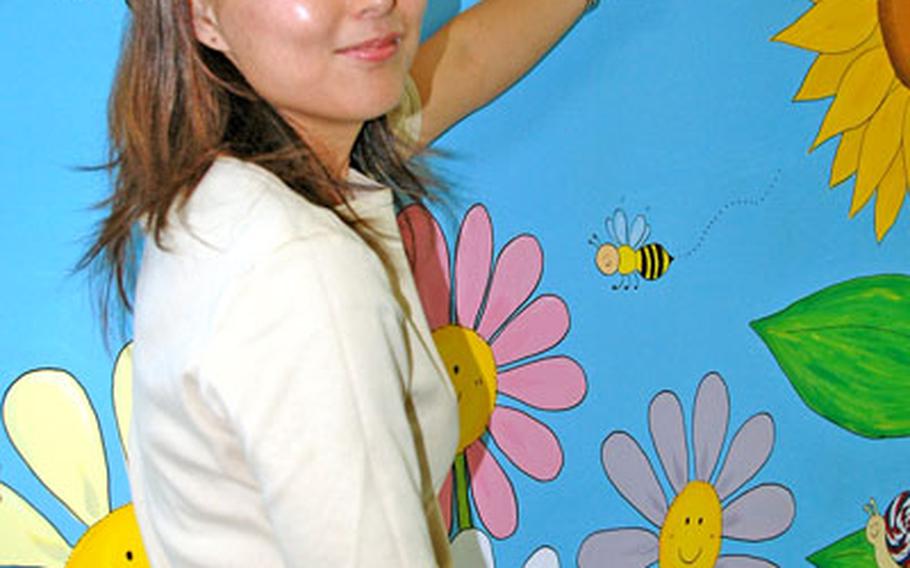 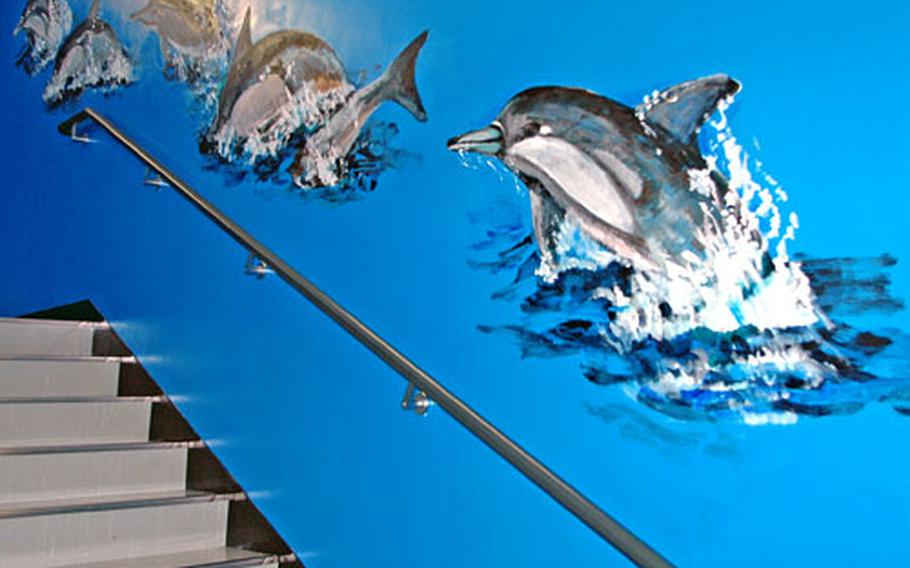 SASEBO NAVAL BASE, Japan &#8212; By day, it&#8217;s a world of hammers, nails, nuts and bolts for the handyman at Jack N. Darby Elementary School. But during volunteer hours he gives the school, it&#8217;s all about acrylics and walls.

He&#8217;s not sure which stretch of wall school Principal John Mueller will allow him to transform next, but he&#8217;s ready, the professional artist from Sasebo city said via a translator Thursday.

In part because of his talents, art began spreading in the hallways.

Gretta Keel, art teacher at Darby, painted both sides of her classroom door with murals featuring a mix of animals and objects that project joy and help enhance creativity in her pupils, she said.

Her door, then another two more murals by Keel and host nation culture teacher Megumi Fukui contributed to more painting.

Satoe Mueller, the principal&#8217;s wife, claims she&#8217;s no artist but accepted the challenge after some urging and painted two large wall murals with storybook flowers and animals.

&#8220;We drew on the walls first using an image shown on an overhead projector, then decided on the colors and I began to paint. I enjoyed doing this, and I think I would enjoy it again. It gives the school a much brighter and happier look,&#8221; she said.

More murals are almost certain. Ikeda paints alone, and his talent is available for more, he said, as long as there are spaces he can transform.

&#8220;I started painting when just a boy. Later, while still growing up, an artist who lived nearby began teaching me about painting,&#8221; Ikeda said. In addition, he studied sculpture for two years at Tokyo University before refocusing on painting.

According to Keel and Mueller, people associated with the school community have commissioned several works by Ikeda. He shows his work in area galleries and at exhibits in Sasebo&#8217;s Yonka-cho (a massive indoor-outdoor mall).

As for the other painters, Keel welcomes anyone willing to help with any upcoming murals.

&#8220;This school environment is so important to our children, and especially overseas at military bases where parents may be deployed for long stretches of time. The school environment needs to suggest happiness and be positive,&#8221; she said.