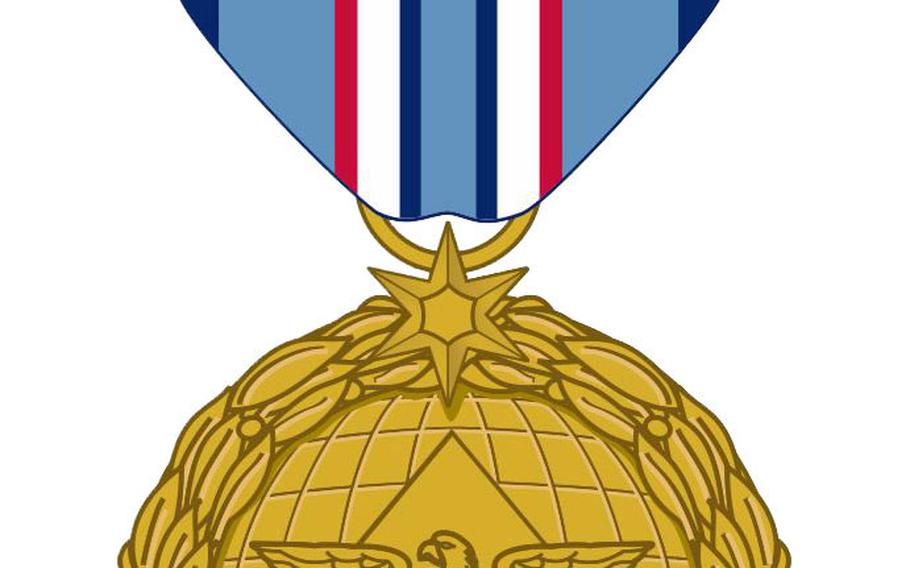 Secretary of Defense Chuck Hagel presents a purple heart to a soldier in Jalalabad, Afghanistan, March 9, 2013. Hagel has ordered a review of the new Distinguished Warfare Medal following complaints from veterans groups and lawmakers about its ranking above the Bronze Star and Purple Heart, a senior defense official said Tuesday. (Erin A. Kirk-Cuomo/Department of Defense)

WASHINGTON — Defense Secretary Chuck Hagel has ordered a review of the new Distinguished Warfare Medal, a surprising reversal from the Pentagon’s insistence that the criticism surrounding the award would not change its future.

Pentagon spokesman George Little said Tuesday said the review was prompted by complaints from veterans groups and lawmakers about its ranking above the Bronze Star and Purple Heart.

The review, to be led by Joint Chiefs Chairman Gen. Martin Dempsey, will look at whether the order of precedence for the new medal should be changed, but will not consider eliminating the new award. A report and decision on the issue is expected by April 12.

Little said those criticisms prompted Hagel to call for the review, and added that production of the new medal has been halted while the review is under way.

The announcement comes days after Hagel defended the medal to critics, and just weeks after the Pentagon announced the new award. The medal is designed to honor “extraordinary actions” of drone pilots and other troops performing noteworthy deeds far from any conflict zones.

The honor is still months away from being awarded for the first time, and no known candidates have been nominated for the recognition. But veterans groups and lawmakers have savaged the new award almost from its introduction, dubbing it the “Nintendo Medal” and “Purple Buttocks.”

Representatives from the Veterans of Foreign Wars, the American Legion and the Military Order of the Purple Heart have petitioned Pentagon leaders and the White House to reconsider the medal’s ranking, saying it should not be place above honors earned on the battlefield.

Members of the House and Senate have also requested a review of the ranking, and introduced legislation to force the Pentagon to lower its placement.

Last week, Hagel seemed intent on upholding the status of the Distinguished Warfare Medal, unveiled by his predecessor, Leon Panetta.

In letters sent out Thursday responding to the concerns of lawmakers and veterans groups, Hagel wrote that he had discussed the medal with the service chiefs and accepted their opinion that the award is at the appropriate level.

“Since Sept. 11, 2001, technological advancements have, in some cases dramatically changed how we conduct and support combat and other military operations,” Hagel wrote. “Accordingly the [Distinguished Warfare Medal] award criteria intentionally does not include a geographic limitation on the award, as it is intended for use as a means to recognize all servicemembers who meet the criteria, regardless of the domain used or the member’s physical location.”

The award is meant to reward a single extraordinary act that affects combat, Hagel wrote.

“It recognizes a specific type of contribution that is vital to the defense of our nation. It in no way degrades or minimizes our nation’s other important awards or the tremendous sacrifices of our men and women who earn these prestigious recognitions,” he wrote.

Other noncombat medals already rank higher than the Bronze Star, which usually recognizes valor, he pointed out. The Medal of Honor, Service Crosses and Silver Star, which are awarded solely for heroism in combat, remain higher in prestige than the new warfare medal, Hagel noted.

But now the defense review will re-examine those issues. Dempsey will consult with the service chiefs about the new honor before completing his final report.

In a statement, Rep. Duncan Hunter, R-Calif. — a vocal critic of the award and one of only a handful of Afghanistan veterans in Congress — praised the decision to undertake a review.

“The (Distinguished Warfare Medal) is widely viewed as an award that undermines all other valor awards and the reverence for servicemembers who face the dangers of direct combat,” he said.

“It’s a fact that those who are off the battlefield do not experience the same risks. Pretending they do devalues the courageous and selfless actions of others, who, during combat, do the unthinkable or show a willingness to sacrifice their own lives.”

In a statement, the officials from the VFW called Tuesday’s announcement “a very encouraging sign” but noted that their work is not yet done.

“The VFW will continue to urge the White House and Congress to force the Pentagon to do the right thing for our combat forces,” they said. “The Pentagon has enough challenges to overcome in the months and years ahead. They don’t need a self-inflicted morale problem added to that list.”

Stars and Stripes’ Patrick Dickson contributed to this report.