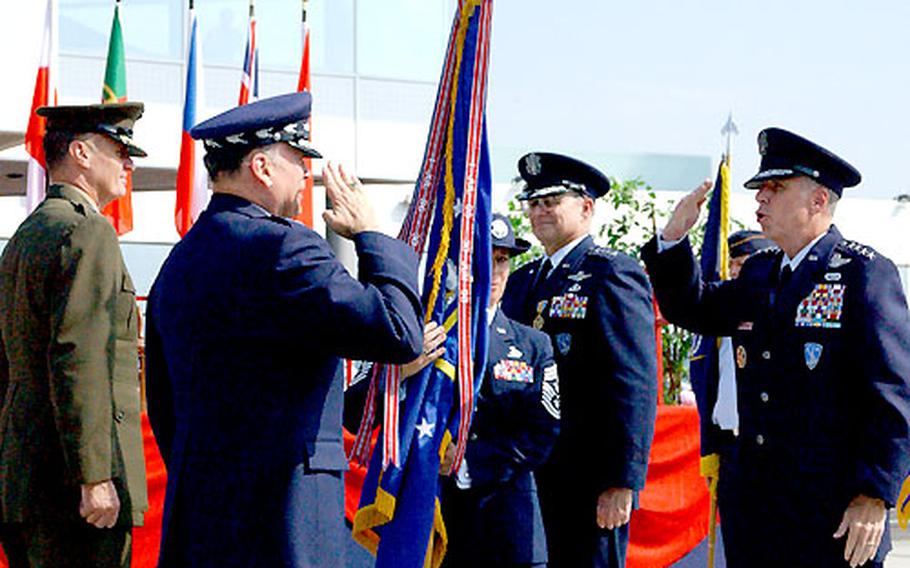 RAMSTEIN AIR BASE, Germany &#8212; Challenging his new command to &#8220;remain relevant&#8221; as the world changed, Gen. Robert H. Foglesong became the commander of the U.S. Air Force in Europe on Tuesday.

Foglesong, who replaces Gen. Gregory S. Martin, said he was struck by the legacy of NATO achievements in the past 50 years, &#8220;blazing a trail of protection and security over the decades.&#8221;

He also noted the changes under way in the Air Force in Europe as it moves to an expeditionary operation.

About 35,000 active-duty, Reserve and civilian employees are assigned to USAFE. Its assets include about 225 fighter, attack, tanker and transport aircraft.

Foglesong was formerly the Air Force&#8217;s Vice Chief of Staff in Washington, D.C.

&#8220;Thank you for working my release program from the Pentagon,&#8221; Foglesong told Jones and Jumper.

Foglesong spoke from a stage adorned with red, white and blue bunting and the flags of the United States and 18 other NATO nations.

About 1,000 people attended, mostly Air Force members dressed in their short-sleeved blues and garrison caps with polished silver belt buckles and black shoes standing on the Tarmac that was already hot from the rising morning sun.

The ceremony took place on the concrete flight ramp behind Ramstein&#8217;s glassy, 57,000-square-foot passenger terminal that opened in January 2002. Ringing the proceedings were a handful of security personnel wearing business suits.

Military planes were assembled as a backdrop, including a U.S. C-130 cargo plane and F-16 and F-15C fighter jets, German Tornado fighter-bomber and Russian-made MiG-29.

Off to the sides were dirt piles and huge cranes from Ramstein&#8217;s ongoing $400 million-plus construction program.