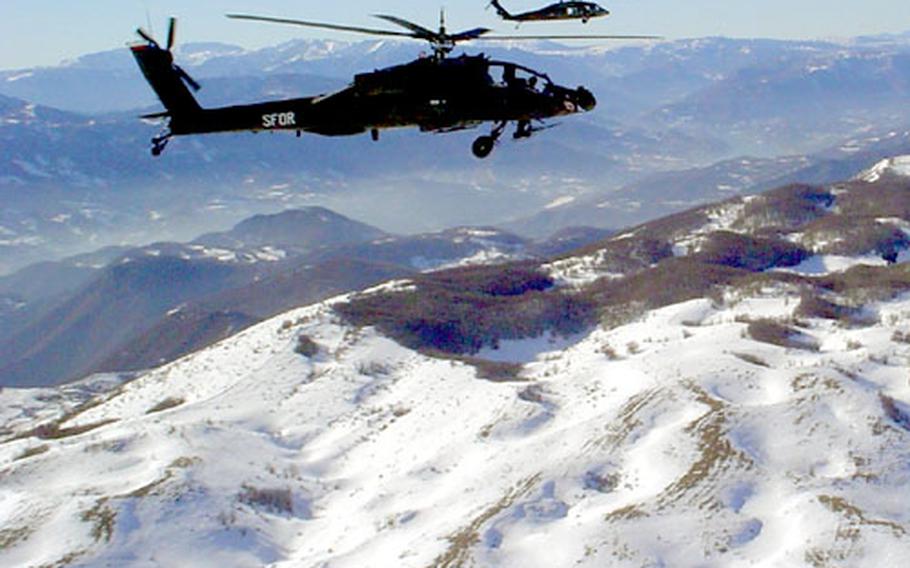 MOSTAR, Bosnia and Herzegovina &#8212; Task Force Renegade troops do not like to sit on the ground too long.

If bad weather keeps them from flying, they just find a different area that the gods grace with better conditions where they can still do their job.

So last week, during a weeklong stretch of foggy weather around their home base at Eagle Base in northeastern Bosnia, the U.S. aviators went to Mostar for about 10 days. The move was part of an effort to help out the international forces controlling the southeastern part.

&#8220;Aviation assets [in Multinational Brigade Southeast] from the last rotation have diminished, so there are only two helicopters here,&#8221; said 1st Lt. Juan Bedia, the Task Force Renegade liaison officer with the southern sector.

Bedia said peacekeepers based in Mostar receive some aerial support from Rajlovac, near Sarajevo, but even with that, they are stretched very thin.

Cooperation efforts among aviation forces that started one rotation ago may then become a necessity.

Last week&#8217;s mini-deployment to Mostar was the third for elements of Task Force Renegade since its arrival in the country five months ago.

&#8220;It&#8217;s kinda like Minnesota,&#8221; said Spc. Aaron Wymer from Bastrop, Texas, explaining the conditions in the northeastern part of the country where the Texas-based task force is deployed. &#8220;This [southeast region] is Texas. Like being on the coast. The weather is nice.&#8221;

And as the weather changed as troops traveled, the scenery did too.

The terrain was different, mostly rocks with fewer trees and not as familiar &#8212; a welcome challenge.

American aviators showed their helicopters to Spanish, French, German and Italian troops interested in checking them out. They also conducted a small sling-loading exercise.

&#8220;Here the weather allows us to do some real-world type missions. It gives the rest of the pilots who aren&#8217;t doing as many missions in the north [a chance] to come down here and do the mission.

&#8220;Mainly it gives the pilots a chance to come down here and enjoy the weather, get good flight time, complete the mission and it&#8217;s a morale booster to be able to meet and greet a lot of the nations.&#8221;