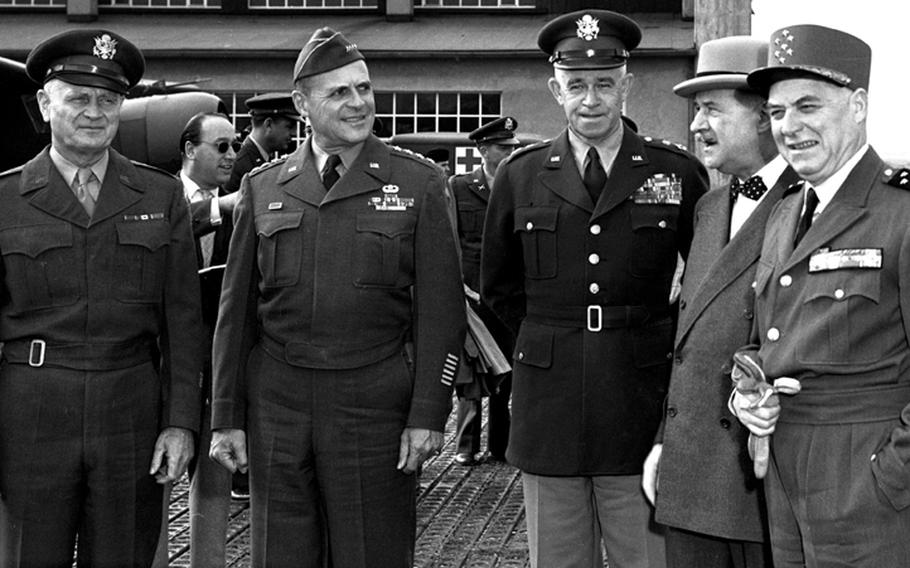 The group met this morning at Baden Baden Airport, motored to the exercise for a briefing and lunch and then left for a tour of the "front."

Before leaving, Ridgway said he had a vital interest in meeting the minimum requirements to build up a defense and added that much of this problem came under civil authorities.

Pleven commented that if the European army treaty were ratified it would be possible that German troops could take part in the maneuvers next year.

Meanwhile Blue forces under French Maj Gen Guy Schlesser fought a valiant delaying action against superior Green forces. In the major clash of the day an armored combat team from the French 2d Inf. Div counterattacked in the southern sector, pushing the "invaders" back from the Alb River toward Herrenalb and Ittersbach.

Maneuver observers said that the surprise of the exercise thus far was the strength the "aggressors" had thrown into the Black Forest area where the difficult terrain makes going tough.

Blue reserve elements were moved up to meet this threat this afternoon and the attack seemed temporarily stalled tonight. However, it had smashed past the tougher part of the wooded area.

The drive gained more than 2 miles.

The frontline tonight ran from Knibis, Richtental, Gaggenau, Busenbach, Durlach and the autobahn to Waldorf. However, the advance units of the 28th Inf Div were in the suburbs of Karlsruhe.

On paper it is the Blue I Corps, with three corps simulated, facing the Green VII Corps, with VIII: Corps and a mass of mechanized divisions simulated.

Involved in the maneuvers, in which 95,000 troops are taking part, are two joint French-U.S. Army corps, combined French-U.S. Air Force units and elements of the French Navy.

Blue troops, fighting desperately to stem the "invasion," apparently intend to keep for the longest time possible a bridgehead in the area of Karlsruhe. In order to allow elements committed east of the Rhineland the inhabitants to cross the river more easily, pontoon bridges have been established at three points.

Naval forces, acting in liaison with engineers, are protecting these bridges.

In the air war, Blue planes from .Fuerstenfeldbruck flew 11 missions, today "destroying" 12 F84s and one carrier plane on the ground.

Ridgway and Bradley visited Blue Hq near Rastatt, the Blue-held bridgehead at Karlsruhe and the 43d Div Hq in the field north of Karlsruhe.

Collins, Eddy and Bolte went to the Green VII Corps command post, the French 4th Div CP and then drove back, visiting line units between Pforzheim and Karlsruhe.

Pleven visited Blue Air Force Hq near Rastatt and then flew to Zweibruecken where lie inspected the French 2d Fighter Sq and then flew to Stuttgart. He drove back from Stuttgart, visiting line units on the way.

The military and political leaders will continue their tours tomorrow.