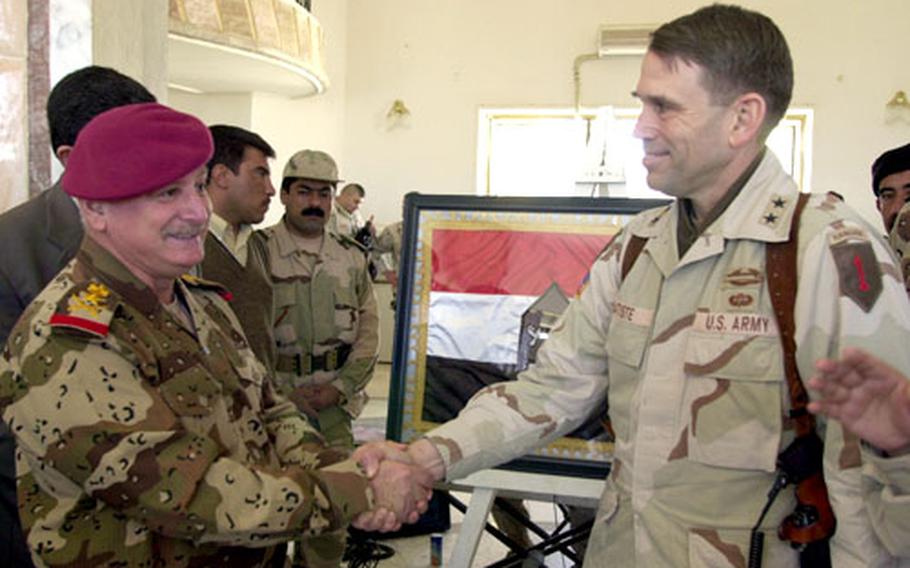 Finding dependable leadership is the most difficult part of building the new Iraqi army, says Maj. Gen. John R.S. Batiste, right. Commander of the new 4th Iraqi Division Lt. Gen. Abdul Rahman Azziz al-Mufti, shaking hands with Batiste, is an example of the best of the emerging leadership, Batiste said. “He seems to be a hell of a guy,” he added. (Terry Boyd / S&S)

U.S. officials are now hoping the third time is the charm, with the goal of Iraqis taking the lead on security &#8212; and American troops in the background &#8212; as the focus turns to standardizing training across the country.

On Jan. 6, the traditional Iraqi Army Day, U.S. officials stood up nine divisions across central and northern Iraq, from Tikrit to Kirkuk to Sulimaniyah. Under the Iraqi army structure, a full division is about 15,600 men, and a battalion is 896 soldiers, similar to the U.S. Army, said Maj. Steve Maranian, Iraqi Security Forces coordinator for the W&#252;rzburg, Germany-based 1st Infantry Division.As of January, there were about 56,000 Iraqis in military forces organized into 90 battalions across Iraq, according to Department of Defense documents.In the 1st ID&#8217;s area of responsibility, the number of battalions increased to 20 from eight or 10 when the division arrived a year ago, Maranian said.At a facility near Tikrit, between 300 and 350 Iraqi soldiers graduate every 28 days, or about three battalions in one year.Smaller training centers in Iraq and Jordan graduate from 50 to 100 soldiers a month, U.S. officials say.Materially, the situation has improved over the past few months. Iraqi soldiers are getting body armor, weapons, communications equipment and trucks, said Maj. Gen. John R.S. Batiste, 1st ID commander. Iraqi soldiers say &#8212; and Batiste agreed &#8212; that communications equipment is essential for the new army.

&#8220;Do they need more? Absolutely,&#8221; Batiste said in an interview Sunday, just before the 1st ID transferred its sector to the New York-based 42nd Infantry Division.

Army officials say the Iraqi army is improving steadily and some units, such as the 205nd Battalion, fought well at Samarra last fall. The key to transforming the Iraqi force is improving leadership, Batiste and Maranian said.

American commanders have replaced unsatisfactory officers and some soldiers, &#8220;but that&#8217;s the exception, not the rule,&#8221; Maranian said.