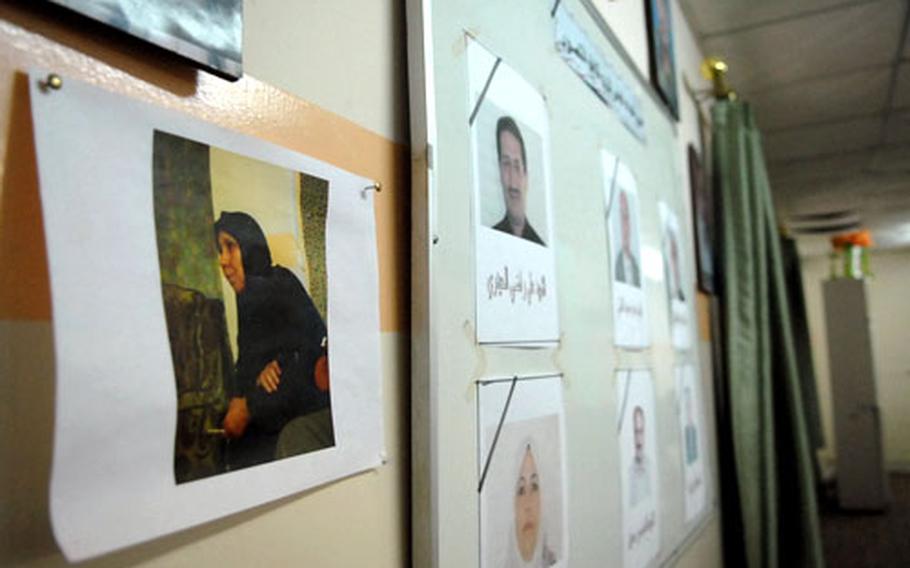 Achmet Hussein, a Mansour District Council employee who helps displaced people return home shows off the paperwork that allows those who fled Iraq’s sectarian fighting to get help returning home. Jobs like these could generate popular support for the American-created district and neighborhood councils. (James Warden / S&S) Editor&#8217;s note: This is the first of two stories on American-created Iraqi government institutions.

BAGHDAD &#8212; There was once an archway connecting the two halves of the Amariyah public works department.

The beladiya, as the departments are called in Iraq, was one of many in Baghdad that couldn&#8217;t provide the services it once did, so the Americans decided to renovate the building as part of an initiative to create a system of "public works substations."

During their nearly six years in Iraq, U.S. officials have created new institutions intended to hasten the country&#8217;s transition to a peaceful, stable democracy. But as with the Amariyah archway, those efforts can unintentionally exclude Iraq&#8217;s existing bodies.

The imminent U.S. withdrawal means the stakes are higher than ever to get the sides working together. If they can&#8217;t get along, the institutions that have been the focus of so much American sweat may not outlast the U.S. presence here by much.

A voice for the people?

Qassim Hanoon has a photograph of the Kadhimiyah mosque hanging on his office wall. The shrine is one of the holiest sites in Iraq to Shiites, and thousands of people in the photo are worshipping outside the illuminated golden dome. When the Sunni-dominated former regime ruled, those caught visiting the mosque during holy days were apt to be arrested or worse.

Hanoon might as well have been talking about his job, though.

He is the Mansour District Council chairman. U.S. officials created district councils and lower-level neighborhood councils in 2003 to give Iraqis a voice at the local level. In doing so, they brushed aside largely technocratic bodies and positions that had managed the country for centuries. These so-called representative bodies have never been truly representative in their nearly six-year history because small caucuses of locals or American leaders appointed the first batch of representatives.

Kark District Council Chairman Sitar al-Orbay recalled one of the better selection processes. About 2,500 people from his neighborhood gathered in nearby Zawra stadium to pick representatives for the neighborhood council, from which the district council members are drawn. Yet that was a far cry from the 30,000 to 35,000 people that the council supposedly represents, although al-Orbay isn&#8217;t bothered by that.

Processes elsewhere were even less representative. A group of just 55 people chose the 12 members for Al Kindi, the first council established.

Analysts have long pointed to the lack of Sunni participation in the 2005 provincial elections as a major obstacle to progress. Ruling parties in provinces where the Sunnis boycotted that election struggled to assert their authority when as little as 2 percent of Sunnis actually voted. But district and neighborhood councils have drawn much less attention, even though participation rates from the 6-year-old selection process approach the same low.

The question is a common response from U.S. soldiers whenever Iraqis complain about a local problem.

District and neighborhood councils were once called &#8220;advisory councils,&#8221; hence the use of DAC and NAC in soldiers&#8217; vernacular. The names have since changed, but the councils are still advisory in nature. They lack a budget beyond the minimum necessary to keep the council running. They do not fund projects. They do not write city ordinances. In most cases, they do not raise any revenue.

U.S. soldiers sometimes haven&#8217;t understood the councils&#8217; role either. Many consider them equivalent to a city council &#8212; with all the legislative, regulatory and financial authority they have back home.

Residents across Baghdad say their first choices for help with problems are coalition or Iraqi security forces, followed closely by sheiks or other local leaders.

Just as telling is the lack of political wrangling for influence on the councils. Iraq&#8217;s big parties have so far not vied for control of the councils as they have with the provincial councils and national legislature. In Iraq&#8217;s hyper-political environment, it&#8217;s an indication that the major parties simply don&#8217;t think the councils are worth their effort.

The local media certainly doesn&#8217;t appear to value them. John Bennett, an embedded provincial reconstruction team leader and a former ambassador, noted that he rarely sees reporters at council meetings and hasn&#8217;t heard of any who have a district council beat.

Iraq has a sprawling, energetic media environment with journalists always looking to dig up juicy scoops. The lack of interest suggests that the media don&#8217;t think readers see them as a part of the fabric of the community, he said.

To top it off, district and neighborhood councils are working against political trends. Cities across the world usually don&#8217;t have elected officials at this level, Bennett said. They may have an elected mayor and city council, but civil servants or patronage offices generally perform duties below those levels.