Focus of Marines in Husaybah turns to rebuilding A U.S. Marine interacts with shopkeepers in Husaybah, Iraq, on Tuesday. Providing for the day-to-day needs of local Iraqis here is now a priority for following last week’s battles. (Andrew Tilghman / S&S)

A U.S. Marine interacts with shopkeepers in Husaybah, Iraq, on Tuesday. Providing for the day-to-day needs of local Iraqis here is now a priority for following last week’s battles. (Andrew Tilghman / S&S) 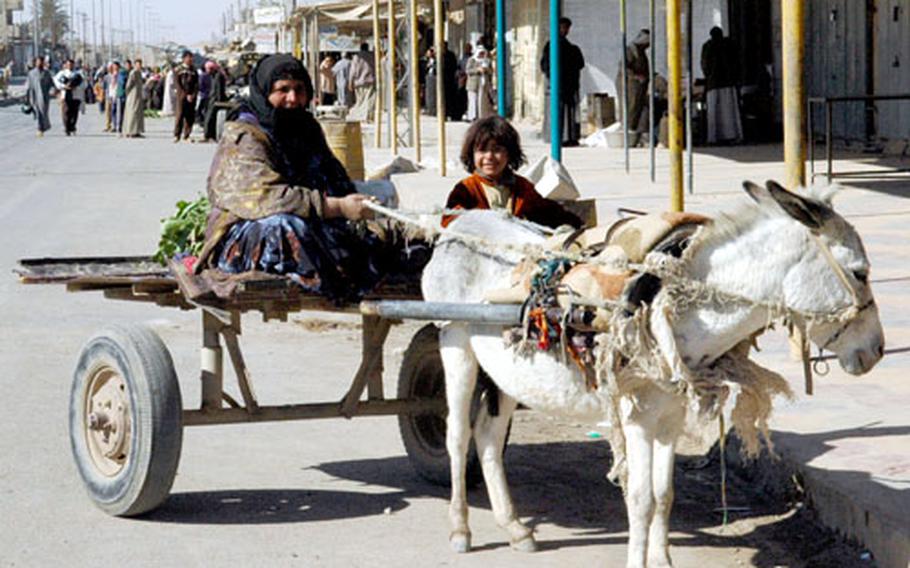 A woman and her daughter on Market Street in Husaybah, where life is returning to normal after seven days of fighting. U.S. Marines are setting up a civil military affairs center to help Iraqis rebuild the city and create a government. (Andrew Tilghman / S&S) 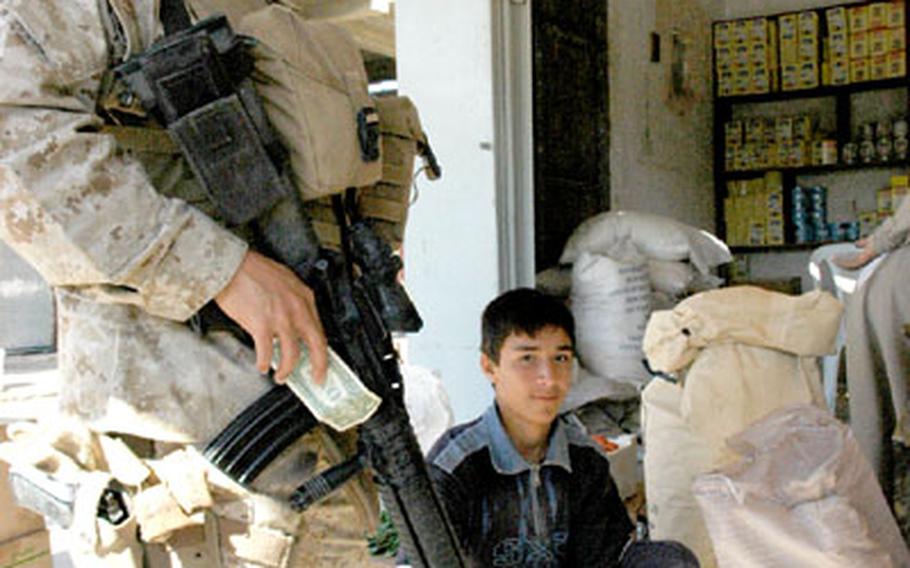 Lt. Col. Robert Glover buys tea and sugar at the market in Husaybah, part of his preparations to set up a civil military affairs center in the city. (Andrew Tilghman / S&S)

HUSAYBAH, Iraq &#8212; Although the ground-shaking explosions that rocked the city for nearly a week have finally ended, many problems remain for residents of this former insurgent stronghold on the Syrian border.

&#8220;We have nothing here. We are drinking dirty water. We are eating what we can. It is survival of the fittest,&#8221; said one 25-year-old shopkeeper as he waited for customers on the city&#8217;s main market street.

Providing for the day-to-day needs of local Iraqis here is now a priority for U.S. Marines following last week&#8217;s battle, which left the city clear of insurgents but also without electricity and running water, and facilities badly damaged during the seven-day fight.

The Marines have opened a civil military operations office for the western Euphrates River valley area, setting in motion plans to pump millions of dollars into the local economy, rebuild public buildings and create a civil government where none has previously existed.

It has been more than a year since U.S. troops have patrolled this city of 40,000 mostly Sunni residents. Insurgents operated openly here and used it as a staging area to move weapons and suicide bombers eastward along the river valley from Syria into Iraq&#8217;s major cities, Marines said.

The civil affairs office is a key element to the long-term presence the Marines are setting up here to stabilize the region before the Dec. 15 national elections.

Reconstruction money will be used as a carrot-and-stick incentive for locals to help Marines and their Iraqi army counterparts track down any insurgents and foreign fighters who may slip back into the city as daily life resumes.

Initial goals include clearing rubble from streets and restoring electricity and water that were knocked out during last week&#8217;s fighting, said Lt. Col. Robert Glover, who heads the civil affairs center.

Another key step is finding local leaders with whom U.S. forces can work. That may be a major hurdle for a place where local politics is dictated by an ancient network of tribes and extended families.

A meeting with local leaders on Monday was halted after the Marines realized that only one of the local tribes was represented. The meeting was postponed for a week until the Marines could find a group that accurately represented the city&#8217;s diverse tribal makeup.

The city has remained calm since fighting ended Saturday and residents who temporarily fled have slowly returned. The main marketplace Tuesday bustled with several hundred people.

Marines have found several roadside bombs they believe had been freshly rigged since the end of the fighting, but troops have reported no major incidents.

The lack of water and electricity has topped the locals&#8217; list of complaints. U.S. forces did not intentionally knock out the services, but they were damaged during fighting with insurgents, Marines said.

&#8220;There are no terrorists here. You come in here with 300 tanks and airplanes &#8212; for what?&#8221; one man wearing a red-and-white- checked Kufiya shouted at several Marines during a conversation in the market place.

Marines in the civil affairs unit say their task of creating a democratic-style government is a monumental one, given the area&#8217;s culture and history.