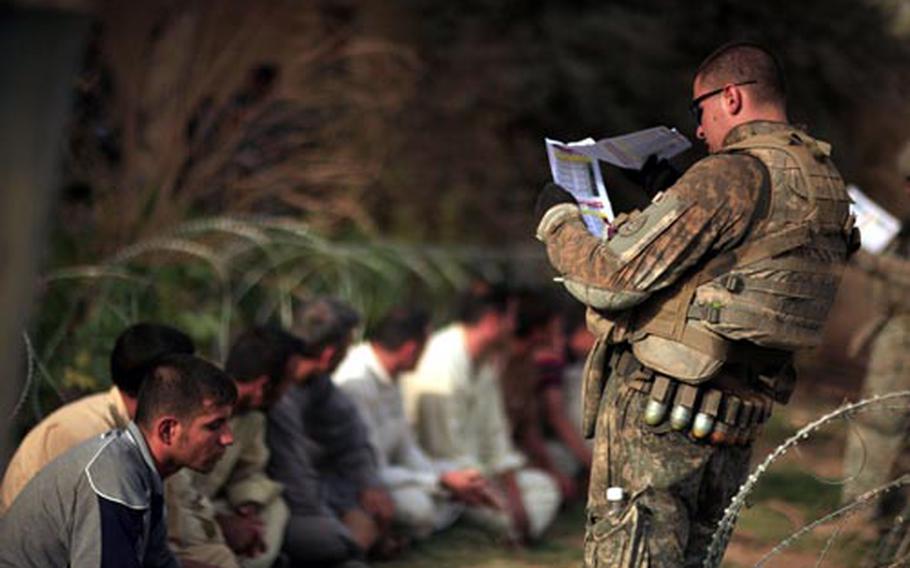 A U.S. Army soldier from Hammer company, 3rd Squadron, 2nd Stryker Cavalry Regiment checks a list of wanted terrorists as Iraqi men are temporarily detained while their identities are verified in Nahr al-Imam, about 90 kilometers (60 miles) north of Baghdad in Iraq&#39;s volatile Diyala province on Wednesday, July 30, 2008. Twenty suspected terrorists were detained in the sweep. Nearly 50,000 Iraqi police and soldiers were involved in a U.S.-backed operation against al-Qaida in Iraq in one of its last major strongholds near the capital, a senior provincial official said Wednesday. (AP Photo / Maya Alleruzzo)

U.S. and Iraqi army soldiers are busy speaking with villagers in the southern part of Diyala&#8217;s Balad Ruz district now that they are finished with the searching and clearing phase of the Iraqi government&#8217;s latest operation against an insurgent stronghold, said Maj. Cameron Cantlon, executive officer for 2nd Squadron, 3rd Armored Cavalry Regiment.

The work marks a shift in Operation Saber Pursuit from a combat focus to community building. Multi-National Division &#8212; North launched the operation to establish a foothold in an area that&#8217;s been a persistent haven for enemy fighters and financiers.

Soldiers began Saber Pursuit by rounding up all the men in the village and questioning them to find out if any were insurgents. They initially found that insurgents had already fled the villages and cleared out many of their weapons cache sites. But they encountered more people as they worked their way through the area, Cantlon said. While many villages were entirely devoid of military-aged males, one recent 400-person village had 75 when coalition forces arrived.

"It shows a commitment of the people themselves," Cantlon said about the resident&#8217;s tips.

Soldiers are now assessing the communities to find out what they need and to propose solutions to their problems. Iraqi soldiers are also meeting with local officials and residents.

Insurgents had previously returned to the area after coalition forces swept through. But commanders say they won&#8217;t be able to do that this time because Iraqi soldiers will be staying behind and more Iraqi police will be hired to help them.

Work has already begun on new checkpoints and platoon-sized patrol bases, Cantlon said. Trucks have delivered barriers for the construction of the new sites.

With work in the Balad Ruz district shifting to a new phase, leaders are already looking ahead to future operations in the province.

"There are operations planned to continue to separate the insurgents from the people," Cantlon said.

Nearly 50,000 Iraqi police and soldiers are also involved in operations against al-Qaida in Iraq throughout Diyala province, a senior provincial official said Wednesday.

House-to-house search operations are focused on the provincial capital of Baqouba, but will be extended to rugged areas near the Iranian border, Ibrahim Bajilan, the head of the regional council, told The Associated Press.

The crackdown will take about two weeks "and then law will be imposed in all Diyala," Bajilan said, according to the AP, providing details about an operation that began Tuesday.

The Iraqi Defense Ministry spokesman, Maj. Gen. Mohammed al-Askari, told AP that 35 "wanted insurgents" have been apprehended so far and a number of weapons seized in Diyala.

U.S. military spokesman Brig. Gen. David Perkins said the main challenges in Diyala were the hot summer temperatures and the abundance of hiding places and enclaves in palm groves and other agricultural areas.

"It just takes a lot of physical effort to go through this difficult terrain in very hot and demanding conditions," Perkins told a joint news conference with al-Askari.