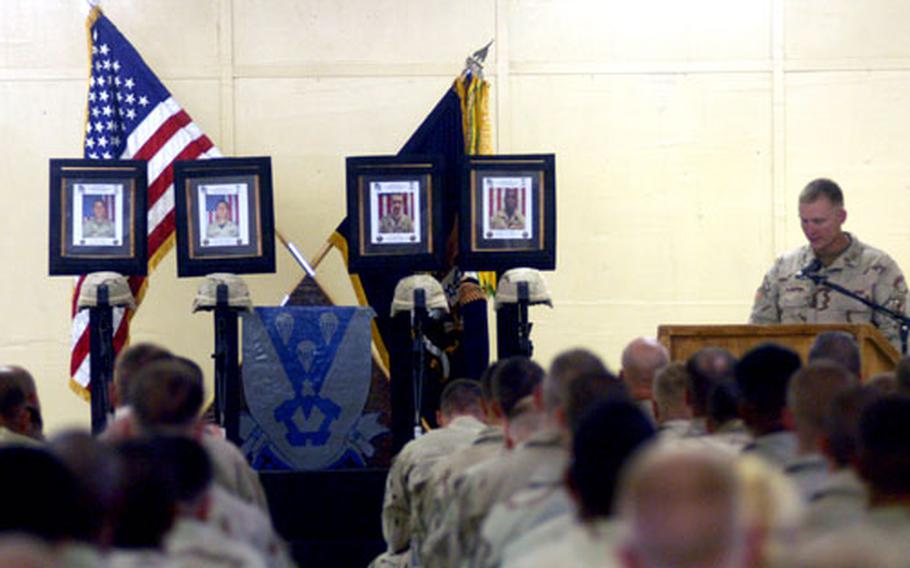 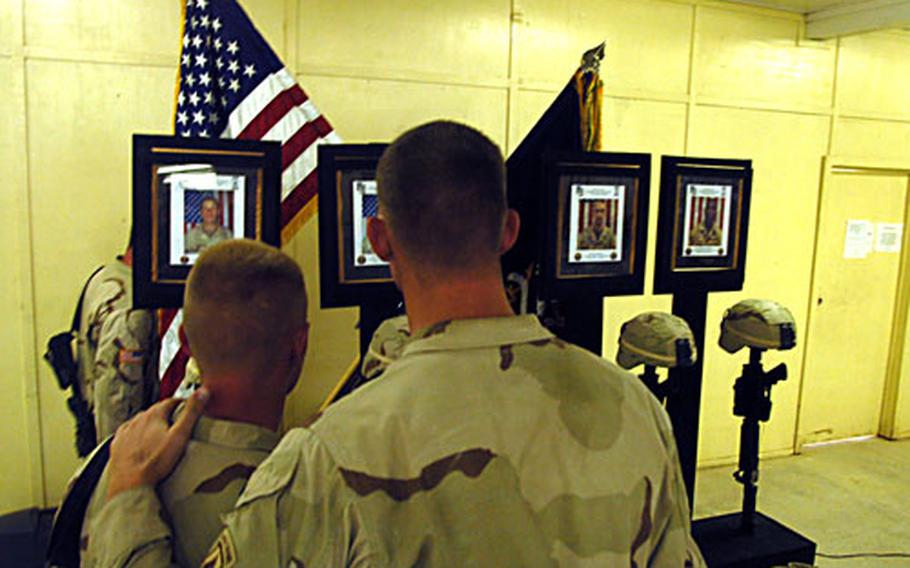 They were &#8220;dedicated to a higher cause than themselves, absolutely selfless in their service to others, the epitome of our Army values and the best that America has to offer,&#8221; Kloepper, the company commander, said about 1st Lt. Joshua Hyland, Spc. Michael Lehmiller, Spc. Blake Hall and Pvt. Christopher Palmer, who were all killed while on patrol in Deh Chopan.

It was a sentiment that was silently reaffirmed by the presence of a few hundred military members attending Friday&#8217;s memorial service at the small base in Qalat, about 100 miles northeast of Kandahar.

Kloepper noted that the soldiers &#8220;could not have been more different than each other, each from a distinctly different walk of life,&#8221; he said.

&#8220;But as soldiers, as warriors and as Battle Company paratroopers, these men were absolutely &#8230; united in purpose, absolutely united in their dedication,&#8221; Kloepper continued, &#8220;building and sharing the bonds of brotherhood known only to those who have tasted battle together.&#8221;

Third Platoon leader Hyland was remembered as a dedicated husband and father who &#8220;gave clear and concise guidance,&#8221; said battalion staff member Capt. Ryan Shipley. &#8220;It didn&#8217;t matter whether you were a private or a colonel, you know where he was coming from on any issue.&#8221;

Born in California, the 31-year-old former enlisted soldier gave up a successful business in Missoula, Mont., to rejoin the Army after Sept. 11, 2001.

Hyland also leaves behind his wife, Lanie, and son, Dylan.

Hall, Lehmiller and Palmer were all single.

An East Prairie, Mo., native, Hall enlisted in June 2003 and moved to Vicenza, Italy, where he joined the battalion staff as a driver and radio operator. After deploying to Afghanistan, Hall received his wish to be transferred to Battle Company, where he served as an M249 Squad Automatic Weapon gunner, scout and radio operator.

About a week before his death, he had re-enlisted for another four years.

&#8220;When I asked him why he re-enlisted, he said [it&#8217;s] because he loves his job and wants to make sure someday his [future] kids can grow up in the good old USA and not have to worry about places like this,&#8221; Fredrixon said about the 20-year-old Hall.

Enlisting in March 2001, Lehmiller served in 1st Battalion, 325th Airborne Regiment of the 82nd Airborne Division before transferring to Vicenza and Company C. It was only after the battalion&#8217;s deployment to Afghanistan that he transferred to Battle Company.

The 22-year-old Sacramento, Calif.-native remained at his weapon that day, exposed to enemy fire, as the platoon&#8217;s other soldiers maneuvered to counter the ambush.